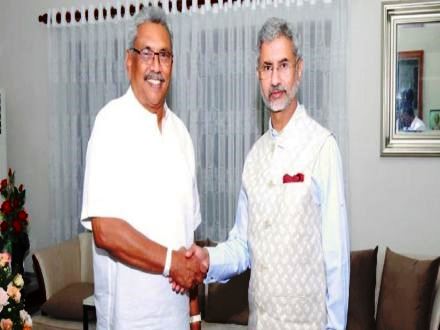 India-Sri Lanka: Off To A Fresh Start

Sri Lanka’s presidential election has thrown up the Rajapaksa brothers once more to the centre-stage of the island’s politics. And in keeping with family loyalties, three of the brothers are now part of the cabinet. President Gotabaya Rajapaksa has made his elder brother Mahinda Rajapaksa the Prime Minister, while Chamal the eldest of the siblings is a cabinet minister. Thus, the Rajapaksa stamp will define this government.

Will Gotabaya play the China card, as his brother did during his second term in office? Does Delhi need to worry that China will spread itself out in an island which is literally in India’s backyard? With the Chinese Navy now regularly plying the Indian Ocean waters, will it become a security concern for New Delhi? In short what does the return of the Rajapaksa brothers mean for India and Sri Lanka’s Tamil problem?

For one there is “gotaphobia” among many in the island nation, including minorities and liberals. Tamils, who accuse Gotabaya and his brother Mahinda Rajapaksa of large scale human rights abuse during the last days of military campaign against the LTTE, would want both to be tried as war criminals. The powerful Tamil diaspora is likely to get active again. For a while, when the unity government was ruling and the Rajapaksa was not in power, the move to drag them to the International Court of Justice took a back seat. India, US and other European nations also did not bother much. For the moment, it seems that New Delhi is ready for a fresh start.

India has been on the ball on Sri Lanka. The return of the Rajapaksa family was expected and alarm bells did not go off in India. Instead, New Delhi played its cards smartly. As soon as Gotabaya was announced as the winner, Prime Minister Narendra Modi lost no time in greeting and congratulating him. Modi was the first foreign leader to do so.

Once Gotabaya was sworn in, external affairs minister S. Jaishankar flew in to Colombo to personally convey Prime Minister Modi’s message to the new President. An invitation to visit Delhi has been given an expected. It sent the message that India was ready to forget the past and build a healthy relationship with the new power centre in Colombo.

Jaishankar is familiar with Sri Lanka and had served there at a critical period when the Indian Peace Keeping Force was deployed in the north and east of the island country. He understands the workings of its political system and knows all sections of political leaders. The Tamil National Alliance leaders will be delighted as they know the minister personally. As foreign secretary too, Jaishankar had visited Sri Lanka several times and knows its politics.

So far Gotabaya has made all the right noises. He has stressed that he will follow a neutral foreign policy. During Rajapaksa’s second term in office he had tilted towards China in a big way. China built the Humbantota port, a white elephant to many, in Mahinda Rajapaksa’s home town, and was awarded the modernization plan of the Colombo port project and building of a swanky new business district from reclaimed land at a cost $1.4 billion (China is an expert on that. Remember how it churned sand from the ocean floor in the South China Sea). President Xi Jinping oversaw the foundation laying ceremony in 2014. Sri Lanka under Mahinda Rajapaksa was becoming a staunch ally of China while India worried the growing dragon’s influence in its backyard.

While this was a sore point with India, more worrying was a Chinese submarine docking in Colombo harbour for refueling, rest and recreation in September 2014. The island nation is literally a stone’s throw away from the Indian coastline. Concerns on the PLA’s naval wing, going in and out of the island was regarded as impinging on India’s security interests. Even after India expressed its concern when the submarine came back to dock in Colombo in November, Lanka said it was on a routine visit on its way to the port of Aden. So when Rajapaksa was trounced by Maithripala Sirisena in 2015, New Delhi heaved a sigh of relief.

In fact, the Rajapaksas were bitter about the role of India during the elections. Gotabaya himself had said at that time that India, US and other foreign powers worked indirectly to defeat the ruling regime. But the quintessential politician that his brother is, Mahinda never said a word in public. He made it point to meet up with Prime Minister Narendra Modi whenever he came to India on private visits and to reassure Delhi that he was a friend. So much of the heavy lifting had already been done by Mahinda when the brothers were not in power.

India has smelt the coffee. It was clear from the beginning that the unity government made up of traditional rivals Sri Lanka Freedom Party and a section of the United National Party were not up to delivering good governance. The mood of the people was clear when the regional party headed by Rajapaksa clean swept the local council elections. India knows it has to do business with the Rajapaksa clan and it will do so.

Delhi has also to come to terms with the fact that Chinese influence in its periphery will continue. It does not matter which government is in power in Colombo. Sri Lanka is already in debt to the Chinese. Despite all the noise made by the opposition over Mahinda Rajapaksa’s decision to give China the business city project over environmental norms not being followed, the Srisena-Ranil Wickremasinghe combine, got China back on the project. China has the money and all developing nations are looking for cash to finance infrastructure projects. Sulking about this will be of no help. It is important to get Colombo on India’s side by continuing to strengthen ties. India and Sri Lanka have more in common – culture and religion — than Colombo can ever have with Beijing.

At the same time, it is important that the new government carry forward the national reconciliation process. Jaishankar conveyed this to President Gotabaya when he met him last week. This will certainly be on the agenda when the President visits India next week. India had made the first move in reaching out to Gotabaya, and he has reciprocated. It is a good start. The coming months and days will show how the relationship works. Now is too early to make an assessment.

My personal view is that ties will improve dramatically. If Gotabaya plays the China card, India can also hit back by encouraging the Tamil diaspora to rake up the human rights abuse during the LTTE campaign. But with Pakistan and other countries now raising the Kashmir issue, Delhi would rather not take that path. Both sides have learnt from past mistakes and Colombo would rather have good relations with its immediate neighbour. This does not mean that Gotabaya will not play ball with China. But, possibly, it will not be at India’s expense.