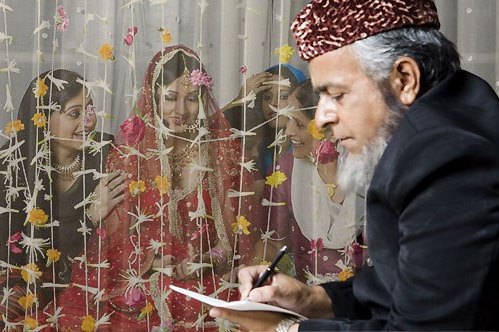 It seems as if every ruling party rakes up the issues related to the Indian Muslims deliberately over the years, before any elections particularly. Further, what confounds one is why do the Muslim religious leaders try to resolve the issues facing the community near these dates only, why don’t they stick to their original plans? One fails to understand the reason that why did the AIMPLB held a meeting to discuss the issue just two months before the assembly elections in some states.

The most recent example in this case is that of formulating the Model Nikahnama for the Indian Muslims, by the Muslim religious leaders, who had promised almost five years ago in 2017 that they’ll draft the Model Nikahnama under the aegis of the All India Muslim Personal Law Board (AIMPLB), when they were rapped hard on the knuckles by the government on the issue of Talaq-e Biddat or the Triple Talaq.

In reality the religious leaders had drafted a model Nikahnama for the first time way back in 2003. But the ideological differences amongst different sects are such that they can’t agree to have a consensus on any religious issue.

Though the Supreme Court had banned the practice of Triple Talaq in 2017 and in spite of several initiatives since 2003 to find a judicious process based on Islamic Fiqh (Jurisprudence), the leaders have been unable to do so and in fact none of them uttered any word either against the SC or the government when the SC gave its verdict in 2017, as they knew within their hearts that they had wrongfully given consent to or not spoken against the Triple Talaq.

Though after 2017, very few cases of Triple Talaq have been reported, yet the practice reportedly continues unabated, as it has not been condemned or banned by the Muslim leaders. Meanwhile, instead of focussing on how to find a way out of the impasse, the religious leaders continue with their slumber and feeding the community with rhetoric-laced pills.

They claim that the drafting of a new Nikahnama is being worked upon but shy away from mentioning any firm date by which it’ll be finalised. This shows their commitment to the community, their followers and particularly Islam. They are unable to sit together and thrash out a strategy against an unIslamic practice in one sitting of the learned ones. Yet they continue with the charade of safeguarding the Muslims of India.

The AIMPLB at one of its meetings earlier this month, continued with their obduracy on not to insert a clause against instant Triple Talaq, as desired and dictated by the SC and which the Muslim Women (Protection of Rights on Marriage) Act, has made a criminal act.

Reportedly, they approached the issue in a round about manner and suggested amongst themselves to insert a clause on Talaq-e-Tafweez or delegated divorce. Thus, effectively trying to paint a picture that they haven’t bowed to the government, but in fact turning a blind eye to an unIslamic practice, and suggesting yet another one on the applicability of which they’ll have no say.

The new suggestion makes the issue not only complex but also shows their desire to hoodwink the law. The leaders have proposed to insert a new clause called Talaq-e Tafweez based on Sharia. Talaq-e Tafweez is one of the most important forms of divorce under Muslim Law or Sharia, as it gives to Muslim women a right to divorce their husband without going to court of law. In this form of divorce a Muslim male can delegate his power of repudiation of marriage to a third person or to his wife also, at the time of marriage.

It further makes one wonder that if the religious leaders and jurists are unable to categorically ban the instant Talaq then what is the assurance that this new proposal will make the instant Talaq, go away from our society. In fact it makes them the butt of joke and shows their obduracy and unwillingness to hear any sane word of advice.

Some members of the AIMPLB reportedly, even opined that Khula, the women’s inalienable right to instant divorce, was a more viable alternative, so there was no need for the clause on Talaq-e Tafweez. Thus, in toto making a mockery of the whole issue.

In reality, a Nikahnama, which is essentially a contract between a groom and a bride, is based on the logic to specify to the women with all necessary terms and conditions of the marriage being solemnised. Its sanctity and the rights given to Muslim women is evident by the fact that the Wakeels (advocates) and two eye witnesses get the bride’s consent to the marriage in absence of her parents to ensure avoiding any sort of pressure from her parents or relatives for the marriage. This is the practical and humane form of the Islamic Sharia, which tries to give every right to its women followers too, at par with her male counterparts.

But this and her other rights given to her by the Sharia, such as her Right to Inheritance in the assets and property of her father are often not followed and given to her by her male relatives. The religious leaders have also been unable to ensure that very bridegroom pays the Mehr (dower, which the husband has to pay to his wife)promised by him to his bride as soon as possible after the solemnisation of the marriage and preferably before the nuptial night.

The ponderable issue here is that when and how the old Nikahnama was given-up by the Indian Qazis. Historically, these earlier Nikahnamas used to contain every minor detail about the nuptial contract between husband and wife and very specifically listed out various rights of the wife.

Now a day, the Nikahnama, used in various Indian states varies from state to state and also from sect to sect, and is mostly a piece of paper stating the basic information about the two parties and contains no mention of the various rights and duties of both the husband and wife.

AIMPLB, which claims to be the highest decision making body of all sects of Indian Muslims should strive to get a modern Nikahnama drafted at the earliest. This should include the rights and duties of both the husband and wife and also guidance on how to ensure a long lasting marriage and if need be, then how to proceed with Talaq or divorce – a step which is despised most by Allah as mentioned in the Holy Quran. This document should not only have the social, economic guidance but also be guided by the Quranic teachings, otherwise it would be an effort in vain and will lead to further politicisation of the issue to be used by different political parties when it suits them.