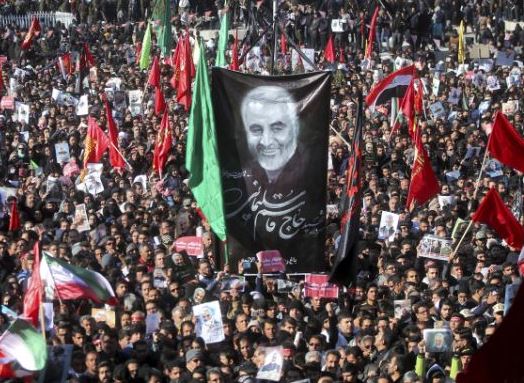 Iran And US – Waiting For The Soleimani Effect

There is a sense that Iran’s punitive response to the assassination of Qassem Soleimani may not be the last act of revenge. However, weakened further by its admission of the unfortunate and horrific tragedy of the civilian Ukrainian Airline plane brought down by error, the Iranian regime appears to be on the backfoot.

The United States played its hand with confidence. Trump’s unconventional gamble that broke international norms alarmed powers around the world. Has he gone too far and has he broken a convention that leaders of other countries are not assassinated? In realpolitik all issues of international law become academic, if power gets the result and/or is far too big to be punished. But it is not always as simple as that.

Iran’s does not have the military or financial capability to challenge the US. It missed the boat on nuclear weapons. Unlike North Korea which is protected by its nuclear arms and a powerful benefactor next door, Iran does not have a superstate completely on its side. Moreover, Iran has been adventurist itself thus making it fair game for retaliation.

Having lost the chief architect of its Shia crescent policy in Middle East, will Iran now start to negotiate with its weak hand? This is what Trump has gambled on. But the United States is not quite in the ascendant in the Middle East.

Also Read: Donald Trump, What Is There Not To Like?

The United States has lost in Afghanistan, in Syria and is just hanging on in Iraq by force.  US policy itself appears incoherent. Its approach to the Middle East lacked understanding of the region in 1990s and still does. From cheered liberators it became victims of hate.

That is the weakness of United States that Iran is most likely to exploit. As a weaker military power, it has played a deeper, lateral, asymmetrical and longer game. Iranian conspiracy with planted agents has been considered to have been one of the reasons the US went to war against Iraq. Apparently Iranian trained agents infiltrated US decision making giving the US false evidence that Saddam was building nuclear weapons.

As an immediate expression to the anger and loss of Qassem Soleimani, Iran carried out carefully choreographed attacks sparing US lives. Iranian people may not have been completely satisfied but felt that ‘something’ at least had been done in retaliation. Until that is the Ukraine flight disaster. This has made the regime look blundering, weaker and target of a frustrated People. It is quite often the case that when people feel defeated, they turn on themselves and blame their own leadership for their sense of hopelessness.

The US is not going to leave matters where they are. Neither is it going to negotiate on equal terms. Trump needs a diplomatic victory against Iran to look strong and strategic for the next elections and brush aside the impeachment. Weakened at home, he needs a masculine win to look strong again.

The US will certainly exploit the cracks in the Iranian regime and encourage the people’s frustration by financing a new revolt as in Syria, in the hope that Iran regime will begin to crumble. That gamble is one that is part of a repeating classical script of United States foreign ventures, despite the fact that it rarely succeeds. For instance Vietnam, Afghanistan, Iraq, Venezuela and now Syria among others, it continues to lift this gameplan off the shelf and have another go in another geopolitical setting. There is usually rarely any original thinking in US policy. And unlike China, USA has not yet quite mastered the art of business without military intervention.

The Iran regime is used to revolts. It too works on its tested strategy of crushing opposition through any means. The US no doubt hopes one day either its plan will work or the Iranian regime crackdown will fail through strategy fatigue.

That distraction is not going to stop Iran hitting at US interests. The regime is deft at dealing with its own and external challenges. Its aim will be to oust the United States not only from Iraq, but from most of Middle East. It is likely to foment trouble in some of the pro US Kingdoms without taking direct action. It may even give ISIS a new lease and turn it against the Kingdoms. It will be a difficult one as both ISIS and the Kingdoms are Sunni, pitted against Iran’s Shia resurgence. Nevertheless Iran will not be lost for other ghost allies who want to see US influences further reduced in the region and turn the ISIS Frankenstein against its benefactors.

Iran could also play a more daring but dangerous game that is not beyond its very scheming ability. The Ayatollahs are patient and devious individuals who have long experience of conducting lateral war. It could play a leading stealth role in starting rebellions within the United States and begin its break up. The US is more divided today than any other time in recent history. Neither the black nor the Latino population of US are happy as resurgent white racism threatens them under Trump.

The US is ridden with internal strife. Both China and Iran would like to see the power of US reduced and even consumed by internal tensions. It will be Russia’s icing on the cake for the break-up of the Soviet. It might seem far-fetched but then so was the conspiracy that Iran hatched to get US into war against Iraq, as was the Russian engineering of US election. Both were once unimaginable.

The third reaction from Iran will be its continuing policy of undermining the world’s dependency on dominance of the Dollar and create a different international financial order that can bypass the Dollar as reserve currency. It is something Iran has been engineering but has failed so far. It may escalate its efforts but it is an uphill battle that could be could take decades to have an impact.

The fourth Iranian action may well be a strategic game it has played quite often. It will appear to both negotiate and stall negotiations giving it enough time to build the nuclear weapon it so covets. That will be disastrous for the Middle East as it will kickstart a nuclear race. It is not a situation the world wants to find itself in, given the volatile and infectious appetite for war in the Middle East. On the other hand it might turn out to be the deterrence that Middle East needs to stop its incessant wars.

Matters could turn out differently but it depends on the US. Iran is weakened both militarily and financially. It has hinted a few times that it will negotiate with dignity. The US on the other hand is always tempted by a weaker opponent and go for the kill rather than negotiate.

It seemed at the time of Barack Obama that the US was willing to let matters be and settle with Iran for a prolonged period of moratorium on its nuclear ambition. Unfortunately it is one of the weaknesses of American democracy that leadership has to appear macho. Its leaders need to win a ‘war’ to become political Rambos. Trump needs to have a win without actually going to war now that Congress has tied his hands.  He has rubbished the Obama deal. He has written the script for a conflict that he may not be able to back off from unless he loses power or is impeached.

However, Trump is also the one person who can wriggle out of his own holes without losing face. He may blame Congress for reversal on his position on the nuclear deal and renegotiate with minor tinkering.

Trump’s fall may be the most desired outcome for Iran along with its attempt to acquire a nuclear weapon. The assassination of Soleimani may prove to be expensive both for Trump and for United States if it does not rethink its policy and put further fetters on Trump.

Yet that may all be irrelevant speculation as another rogue actor joins the game. Trudeau, the Canadian Prime Minister, desperate to regain some international respect after his disastrous few years that began with an ill-fated visit to India, has started a belligerent rhetoric prodding the West to take a hardline approach. It is often the unexpected that lays waste the best laid plans. Trudeau, it seems, may be the new Blair. An apparent evangelic liberal with a perverse appetite for war and pontificatory lectures to the world. It is not Boris and the British war machine that the world needs to watch but the new-born Liberal Party whose leader has so far been a damp squid, now willing to turn hawkish.

There is the other unknown, the actions of Israel. Its democracy seems to throw up leaders who can be ever more aggressive towards the neighbours than the previous one. Its actions on Iran may be the aberrant that lights the fuse in Middle East. Qassem Soleimani’s shadow may last much longer than anticipated beyond the grave.