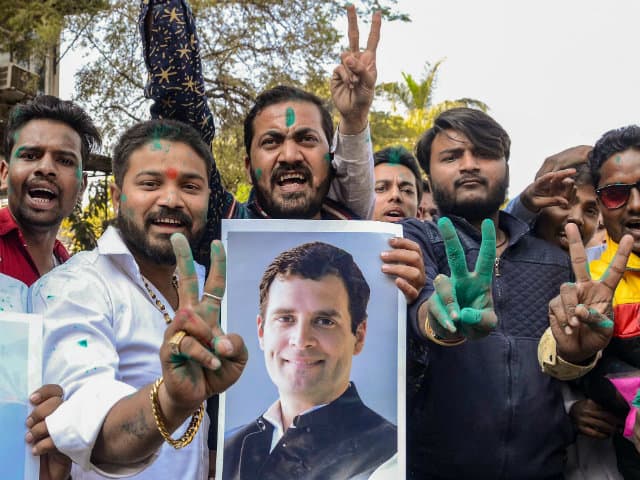 Irrespective of who takes over as the new Congress president, the biggest hurdle the new incumbent will face is that of acceptability within the party

There appears to be a large sink hole developing in Congress as Rahul Gandhi has made it clear that he is firm on stepping down as president, The party is gradually coming to terms with the fact it will no longer be headed by a member of the Nehru-Gandhi family.

The party is like a family of nursery age children left at home for days without parents. But it does not appear they will be orphaned. They will soon be fostered to a caretaker handpicked ‘headmaster’ and Mummy and Daddy will be at hand nearby.

It is not easy for the Congress to grasp this new reality as it has, over the years, become heavily dependent on the First Family. The party relies on the family to win them elections and also to keep it united. It appears to be headless at the moment, at least in the public eye.

There is no doubt that the Congress will soon have a new president. The process of consultations to find a consensus candidate has been kickstarted and the party’s highest decision-making body- the Congress Working Committee – will be scheduled within a week or ten days to appoint the next party president.

Several names are doing the rounds. Mallikarjun Kharge, Sushil Kumar Shinde, Ashok Gehlot, and Anand Sharma are said to be in contention but there is no final decision has been taken.

While there is no room for any ambiguity that the Congress will now be headed by someone who does not belong the party’s first family, there is no clarity on the role of the Gandhis in the new set-up. More importantly, questions are being asked if the Gandhis are ready to relinquish their control over the party.

In the four-page letter he penned announcing his resignation, Rahul Gandhi said  several leaders had suggested that he name his successor but  he did not wish to get involved in the process and wanted the party to take this decision. Congress insiders insist the Gandhis have made it known that they intended to stay away from managing party affairs and that it is now for the others to shoulder this responsibility.

However, this does not mean that the Gandhis will turn their backs on the party. They have told their colleagues that they will be always to there for the party. In his four-page resignation letter, Rahul Gandhi also clarified that though he would no longer be heading the party, he would continue to fight for the ideals of the Congress. He also said he will be available to the party whenever it requires his services or advice. The Nehru-Gandhi scion is planning to embark on a padyatra across the country to create awareness about the Congress philosophy and position himself as an ideologue.

While Rahul Gandhi will be very much on the job, Sonia Gandhi will also contribute her bit.  As chairperson of the Congress Parliamentary Party she has been mandated to appoint leaders in Rajya Sabha and Lok Sabha and also to coordinate with other opposition parties on specific issues. She is also authorized to call regular meetings with MPs to decide on the party’s Parliamentary strategy. Then again, the family’s latest entrant into politics – Priyanka Gandhi Vadra – also has a seat on the high table. As party general secretary, she is a member of the Congress Working Committee.

What this essentially means is that the Gandhis are very much around and are unlikely to fade away or allow the party to slip out of their control. The family has too much at stake and cannot afford to walk away without a backward look.

In fact, it is an accepted fact that the new party president will be picked by the Gandhis as they would like to  keep one foot in the door in case the Congress experiment with a non-Gandhi  fizzles out.  Senior Congress leaders privately admit that it is entirely possible that Rahul Gandhi could return as party president after a couple of years but not before that. However, they also acknowledge that the Congress needs the Gandhis as the party would collapse without them.

This has raised apprehensions in the party that the new president will not be able to take independent decisions and function autonomously. In fact, many leaders are wary of taking on this responsibility in view of the experience of previous non-Gandhi Congress chiefs like P.V.Narasimha Rao and Sitaram Kesari who were booted out unceremoniously.

Irrespective of who takes over as the new Congress president, the new incumbent has a daunting task ahead. The biggest hurdle he faces is that of acceptability within the party and ensuring that he is able to discharge his responsibilities effectively. The “to do” list is endless. To begin with, the morale of the Congress cadre needs an urgent boost, the party organization has to be overhauled and strengthened, the internal wrangling in the state units dealt with forthwith and greater ideological clarity provided to the rank and file.

It is not an easy job given the constraints facing the new President. Unlike the Gandhis, who were insulated from internal criticism as these attacks were generally targeted at their team members, the next Congress chief will not enjoy this luxury. He will be constantly under the scanner and will be in the direct line of fire from in house rebels and critics.

Years ago, a senior Congress leader had once told a disgruntled office bearer to understand that “the Congress is a Nehru-Gandhi party.” The new party chief will soon find out if the Congress has outgrown the First Family or the cadre continues to look up to it for patronage and political survival.