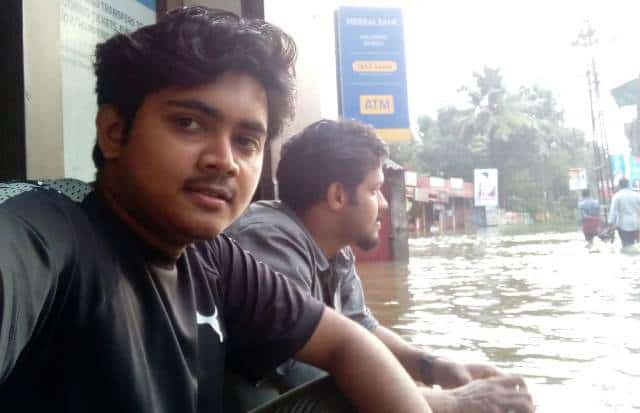 I usually love the rains. Sipping coffee when it is raining is very relaxing. But after this (2018) monsoon, things will never be the same again. It started in May with what seemed like a cloud-burst. Then, there were incessant bouts of downpours. Initially, the problems were limited to waterlogging, potholes etc. The first reports floods came in Kuttanad (Alleppey).

By August 15, when the nation celebrated Independence Day, Kerala began to witness the wrath of nature. Reports said the dams across Kerala, mainly Idukki dam on the Periyar and Shabarigiri on the Pamba, were overflowing. Yet, nobody estimated the magnitude of the calamity in store. On August 17, many districts sounded a red alert. I live in Haripad, Alappuzha, which flooded because of improper maintenance of dams in the nearby districts.

We heard that several leaders blamed the rising waters to beef-eating sinners in Kerala. I believe we reap what we sow. It was just a natural process after ecological rampage. I remembered the Bible quote: Let him who thinks he stands take heed lest he fall, no one is exempted from actions of nature. My phone had not stopped buzzing all this while.

My aunt called from the US kept advising me to “take your necessary certificates, get off and reach some safe zone”. We started rearranging and shifting our items, even packed our trolley and backpacks with the essentials in a bid to move out fast since the water level was increasing in the nearby river. That night we slept very late. At 6 am, we woke up to find the courtyard in ankle-deep water. The passersby, familiar faces, were all hurrying to safe camps.

My friends and neighbours were running away from their homes near the river, leaving behind a life’s worth of savings and memories. When I asked them where they were headed, they said they didn’t know. “Everything is gone! We are running to save our lives at least”. By the next day, I realised that things were getting worse. There were rumours that the water may rise to 3 metres.

I am 5 feet 3 inch and don’t know how to swim. Can you imagine how frightened I was! I called for information about relief camp in the vicinity and whether we could move there. One was being run by an uncle of mine from his new house which was multistoried. That evening when water rose in our compound steadily, we made our decision to leave.

I bundled some clothing, my documents wrapped in plastic covers and some food item and left for my uncle’s place. Our trip there was a long way through knee-deep pools of water. Thankfully, the relief centre was equipped with landlines and a generator, which helped us charge our phones and stay in touch with friends and family. We also managed to get groceries from the nearby town for the next few days via service trucks and rafts.

Day passed, with no relief from pouring water, nights were moonless and the birds silent. Three days later, the sun broke and I heard an ambulance. There were boats and rafts all around our building, and some tractors loaded with people. It looked as if entire town was moving past. From the balcony of our building, I saw a bridge nearby and army men rafting in. There were monstrous sounds of helicopters over us too. The water on the ground was at stomach-level and people of all age were climbing up the ladder handed out by the rescue operators.

Even at such moments, people joked about ‘how a beastly vehicle has turned out to be a saviour’. We were taken to a proper relief camp where we felt safer and calmer. I met many friends who had run away from the flood. There was mobile connectivity and even food was available, though overpriced; imagine paying Rs 80 for a bun! Over the next few days, radio was our only way for information and entertainment.

And we realised how informative its programmes were. I volunteered to visit other camps with supply of food and water. I found young and eager volunteers performing services to assist officials and in some cases even in the absence of any official. Some heroes don’t wear capes. With water levels residing, we decided to return to our house. The route was dotted with abandoned houses, covered with grime, broken walls and damaged vehicles.

Some people were busy cleaning and rearranging their lives. We found the floor covered with slime and mud. My parents, my sister and I got down to the job of cleaning, an effort that took us three days, and yet the stains on the walls and floor refused to go. We had lost our washing machine, motor pump and many other gadgets to the flood, and battled poisonous snakes that had nestled into the compound.

But I also picked up valuable lessons for life. We heard about marriages, festivals and other celebratory functions were either postponed or observed humbly in relief camps. I know some people donated their dowry money to the disaster relief fund. Onam came, and people celebrated its true spirit – “humanity”, and “Maveli naadu vaanedum kaalem manusherellam onnupolae”, the concept of Ram Rajya advocated by Mahatma Gandhi. We were helped by strangers, whose names we forgot to ask, whose castes or faiths we never bothered to know; there was unity without any barrier.