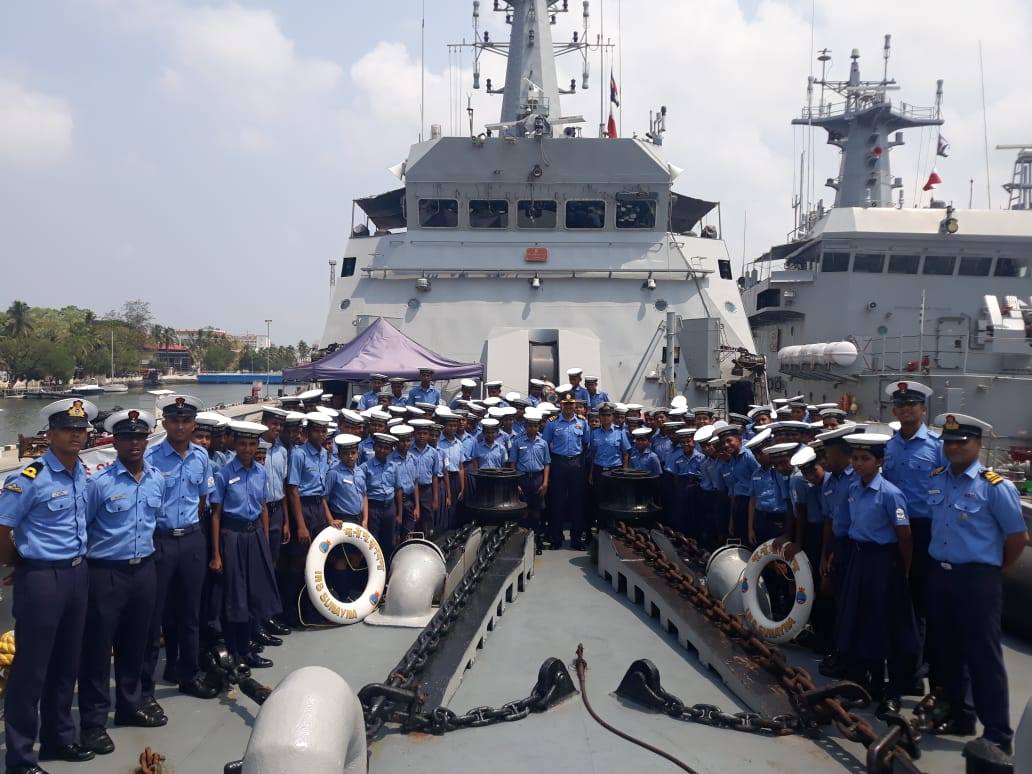 At the southern tip of Mumbai, a ship, unconventionally built with cement and concrete, sits lonely, wafted by the Arabian Sea waves, anxiously awaiting its officers and cadets kept away by the Coronavirus pandemic.

Named after India’s first prime minister who had laid its keel in 1963, Training Ship Jawahar, as the name indicates, currently trains 2,300 of young boys and girls in seamanship – rowing, kayaking, canoeing and sailing – in naval affairs and rigours of being on the sea. But more than that, it inculcates discipline and prepares them for their future lives as caring, productive citizens.

Not everyone joins the military service or one of the many merchant navy companies. That many trained by Sea Cadet Corps (SCC) do get attracted to wearing uniform and have done well in these professions is, not a rule, but a natural corollary.

The ten-year-olds and teens from all sections of society first make a Promise to wear their uniforms smartly and bring pride to it. Once the cadet spends own money on that uniform, training in above and many more activities that are normally reserved for the rich anywhere else, come for just Rupees 400 annually. No fees for the sense of adventure that comes with it.

This culture of volunteering at the sea was initiated 82 years back in Karachi by a young entrepreneur, late Gokaldas Ahuja. It was appreciated by the Royal Indian Navy and the city’s elite that helped the Sea Scouts to build their landship at Chhina Creek. But that dream ended with the Partition.

Ahuja and cadets met, symbolically, at the Gateway of India in Mumbai, then Bombay, to revive the movement. The Indian Navy and the citizenry embraced them.

Commissioned on February 10, 1966 by then President S. Radhankrishnan, Jawahar, now 54, besides Nehru’s name, carries a halo of its own that is sustained by training imparted to over 40,000 cadets to date.

The SCC’s history is also the veritable history of Bombay and other port cities in the decades that followed the Independence. Not just the prime ministers, governors and chief ministers, but also top Services brass, the business community and the social glitterati attend its Parades and the March-past on Independence Day by its units in many cities.

Girl cadets enrolled as early as 1955. Besides Vishakhapatnam (Vizag), Chennai, Goa and Kochi, SCC imparts training even in less-known Okha, Daman, Paradeep and Porbandar. Besides the Indian Navy, logistic and training support comes from the Indian Coast Guard, Army units and even a school in Ootacamund (Ooty).

Sea Cadet Corps is India’s only auxiliary body which is authorized to fly a Blue Ensign. To enable this, Parliament amended the Merchant Shipping Act.

Long years have seen generations of cadets, coached by volunteer-officers, some of whom have returned to Jawahar on retirement after completing their careers. Cadets have excelled in martial music and tattoo, while participating in regattas and water-sports events in the Olympics and the Commonwealth Games.

The Corps has participated in global events and hosted some as part of an international movement of Sea Cadets and International Sea Cadets’ Association (ISCA) forging fraternal ties with 120,000 cadets in 18 countries that stretch from Canada to Hong Kong and Sweden to Britain.

This Indian movement received recognition from the British royalty in the early days. Its Parades were inspected by Queen Elizabeth II (in 1961) Prince Philip (1959) and Prince Charles (198O), besides Lord Louis Mountbatten (1964).

Its Sail Training Ship Varuna became a model for a float at the Republic Day parade in 1982. And in 1987, Varuna represented India at the Bi-Centennial celebrations marking the founding of Australia.

After Nehru’s invitation, followed up by succeeding prime ministers SCC contingents participated in the Republic Day Parades till 1986, marching on New Delhi’s Rajpath. I was lucky to participate twice.

Why do I talk about Sea Cadet Corps? Only because I trained with it? Or, because I was among those cadets that placed stones to reclaim the sea where Jawahar stands, and witnessed its rise — a huge super-structure, ship-like gangways, the Captain’s Cabin and portholes for windows?

See a larger picture before dismissing it as a weekend pursuit for the young. Some of the cadets who went on to join the armed forces were martyred during the conflicts in 1965 and 1971. Lt. Suresh Hiranand Kundamal went down with INS Khukri in 1971 and Major Vetri Nathan died in Kargil sector in 1971. Indeed, the road leading to Jawahar is named after Nathan and the one approaching the Gateway of India, after Flying Officer Prem Ramchandani who died during the 1965 conflict.

Take a still larger picture. Besides the National Cadet Corps (NCC)’s Naval Wing, there certainly are sailing clubs along the Indian shores. But none imparts all-round seamanship training to volunteer, by volunteers, as the Sea Cadet Corps does.

Truth be told, there is little focus on the sea – water in general—in India. View this in the context the fact that only a fourth of our world is land, but also that India has a vast coastline that juts into the Arabian Sea and the Bay of Bengal.

India also straddles the Indian Ocean. I have often used this well-known fact while arguing to emphasize India’s importance as a seafaring nation with a cheeky question: “Sir, tell me another nation that has an ocean named after it?”

And yet, awareness of the sea is woefully poor in India’s security culture since the invader always came from its northwest. When the ‘enemy’ did come by the sea, as trader, India was colonized for over two centuries.

The Indian Navy remains small considering the nation’s maritime interests and its strategic reach on the high seas stretching from the Gulf of Hormuz to the Malacca Strait. It also remains the ‘silent’ Service, not supposed to seek ships and weapons. At least, not boast about it. Once when I wrote about higher budgetary allocations for the Navy, the Western Naval Command Chief pleaded with my editor to ask me to pipe down!

Take the current talk of India having to prepare to fight on two fronts in its north, without jeopardizing security at the sea. Can this be achieved, in short, medium or long term without creating general awareness and without dedicated and disciplined youth that must be trained, at least in the basics?

Or take the talk of PPP – public-private participation – in making the country self-sufficient in national defence. Shouldn’t the PPP concept be extended to and experimented with an auxiliary body like the Sea Cadet Corps?  Its motto, incidentally, is: “Ready Aye Ready.”

You have raised a very valid question. Security implications go beyond precautionary now. As the China paranoia is being drummed up, the sea front has to be war ready…but is not. Hope things start changing for the better soon. Can’t afford shrinkage of influence zones any further.