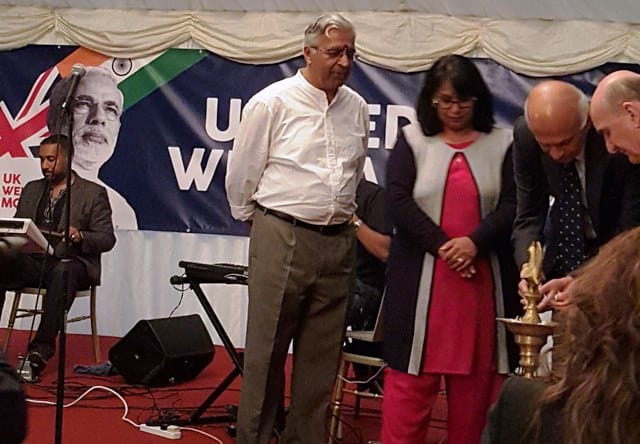 Narendra Modi and RSS have a reliable and prosperous constituency among NRIs who have a translated, frozen and overly benign view of an India they left behind, writes Deepak Pant

The legal definition of an NRI is that of a ‘non-resident Indian’, though sometimes the person also attracts the sobriquet of a ‘not required Indian’. Physically located abroad, the NRI community – and the Indian diaspora – is spread all over the world; in some cases over generations with weak links to what was once their homeland. Many have frozen, nostalgic and mostly outdated memories of the India they left behind; India has, meanwhile, moved on. The dictum that distance makes the heart grow fonder may well be valid in the case of the NRI community: for example, Diwali is celebrated with more gusto and tradition in places such as Leicester in the UK than is the case in many parts of India.

Caught between two cultural stools – their Indian cultural identity and the culture of the place of their location – most members of the NRI community turn more ritualistic than many Hindus in India. Most NRIs are not Indian citizens, so cannot vote in Indian elections, but that does not prevent them from joining the heat and dust of campaigning in large numbers. The BJP is clearly ahead of the Congress in terms of support in the NRI community; from the UK alone, over 2,000 volunteers have travelled to India at their own expenses to campaign for Narendra Modi and the BJP.

The RSS and its organizations have long worked among the NRI community in the UK and elsewhere, benefiting from large donations as well as spreading their version of ‘cultural nationalism’ to a grateful people caught between two stools. Britain has a considerable presence of the Hindu Swayamsevak Sangh (HSS), which has been functioning since 1966. Its structure, principles and activities are similar to those of the RSS, whose head, Mohan Bhagwat, attended its ‘mahashibir’ in Luton in August 2016 to mark 50 years of its existence. It was the influential Gujarati lobby that influenced the David Cameron government before the 2014 elections to abandon the earlier policy of boycotting the Modi government in Gujarat over the 2002 riots.

As prime minister, Modi made a splash while addressing the diaspora at the Wembley Stadium in November 2015, while Cameron, who would often woo the Indian vote by appearing at large events addressed by Hindu religious leaders from India, among others, won much support from the Indian community during the 2010 and 2015 elections. The convergence and conflation of Indian with Hindu interests was evident before Modi’s November 2015 visit to London. At a ‘thanksgiving’ event at the Indian Gymkhana for the benefit of many organizations that had come together to welcome Modi, the influence of the Hindu-HSS-BJP lobby in the UK was evident. On the stage, against a backdrop of a large Modi image, were Dhiraj Shah (president of HHS), Baroness Sandip Varma (Conservative), Ranjan Mathai (Indian high commissioner at the time), Nat Puri (prominent industrialist), Virendra Sharma (Labour) and Stephen Pound (Labour). Other leading lights were also in attendance.

It may well be a case of ‘Begani shadi me Abdullah diwana’, since most of the NRIs cannot vote, but the largely pro-Modi/BJP community has also been courted by Modi during his foreign visits. The template of his visits to various capitals invariably includes an address to the local Indian community, which was not the case with previous visiting Indian prime ministers. At such meetings, Modi makes it a point to deliver feel-good speeches, insisting that the diaspora community has the same ‘khoon’ as that of any Indian. He gives the impression that he is setting things right in the country many had left due to various reasons. But all the while, his stated and unstated focus remains the majoritarian Hindu support base. For example, during the community address in Paris in June 2017, hundreds of members of the Bohra Muslim community resident in France but with roots in Gujarat waited patiently for him for hours, most of them holding small Indian flags. But Modi came, spoke and went away without as much as a cursory glance at them, leaving many of them disappointed.

For the ongoing Indian elections, the Overseas Friends of BJP has been in hyperactive mode. According to its officials, nearly 5,000 volunteers from the UK have travelled to India to join the BJP’s campaign, while others have been enlisted to make calls back home to support Modi as prime minister again. Others have organised bike rallies, flash mobs and pushed on social media videos taken at iconic places such as the Big Ben while extolling the achievements of the Modi government. Leveraging support for the BJP and RSS-backed groups in the 1.5 million-strong Indian diaspora, many of its members and supporters were active in campaigning for the BJP during the 2014 elections. A ‘Chai pe Charcha with Namo’ was also held in Harrow. The level of support for Modi and the BJP in the Indian diaspora far outweighs that for Rahul Gandhi and the Congress, even though the party’s units abroad have a history dating to the pre-independence days, when many Congress leaders studied in the UK.

Most NRIs have a translated, frozen and overly benign view of an India they left behind. They may not make much of a difference on the ground, but in the age of rapid communications, globalization and the internet, Modi and the ‘sangh parivar’ clearly have a reliable and prosperous constituency outside India on which they can fall back as and when required.