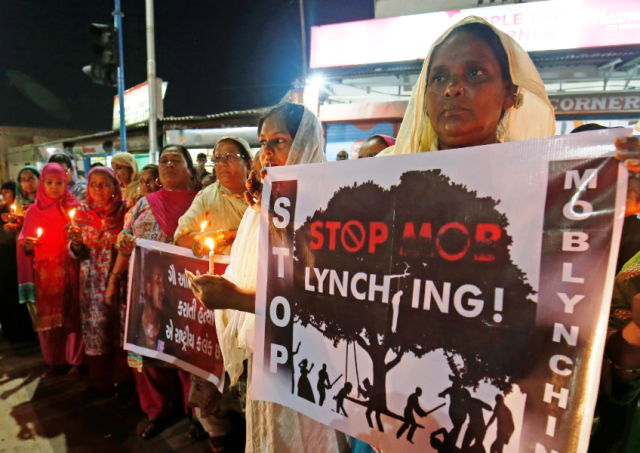 The Bihar Police has withdrawn the sedition case against scores of celebrities. The case was filed on a complaint by a maverick person who has a history of filing such charges against all and sundry to hog headlines. The 49-odd celebrities were no run-of-mill names. They constitute some of the finest artists, writers and actors in the Indian kaleidoscope, including internationally acclaimed film directors Aparna Sen from Bengal, Shyam Benegal in Mumbai, Adoor Gopalakrishna in Kerala and historian Ramachandra Guha.

Their crime? These public figures had written an open letter to the prime minister of India, expressing serious concern on the repeated cases of mob-lynching, especially against minorities and Dalits, a malaise which seem to be spreading beyond control in the last five years. Even a highly respected ‘Hindu’ police officer was lynched in Bulandshahar, Uttar Pradesh, by a violent mob while he was trying to restore law and order. Besides, there have been the usual cases of women branded as child-lifters or witches followed by lynching in several places, especially in the tribal state of Jharkhand. The 49 celebrities had stressed that the ‘Jai Shri Ram’ slogan was being reduced to a “provocative war cry”. They also pointed out that there was “no democracy without dissent”.

While India is no stranger to mob violence, there is certainly a sinister pattern in the current lynching madness. These deaths, a majority of them triggered by suspicion over possessing beef, are not the outcome of kangaroo courts; nor are they following any so-called ‘communitarian’ process of localised, primitive justice. They are solely driven by hate, distrust and xenophobia, similar to hate crimes all over the world, as was meted out to Afro-Americans and Blacks in slave-driven America and in the West. Or as it happens with deranged fanatics, armed with sophisticated guns shooting down school children or immigrants in ethnic or mixed localities in advanced capitalist countries.

Only that in India, especially in the Hindi heartland, it is now well networked. It often seems a planned public spectacle whereby social media and messaging platforms are used to first spread rumours and then exhorting small groups to reach the spot. The crowds collect faster than you can imagine, the cops disappear or become inaccessible, and the district administration turns a blind eye to this macabre act of public lynching.

According to a media group study, there were 45 lynching deaths reported in the country since May 2015. While majority of such violent incidents occurred in the Hindi heartland, 18 of the deaths took place in Jharkhand alone.

This reporter travelled across the interiors of the beautiful tribal state, with its lush green forests and simple people, and discovered that this hostility or hate has been master-minded, calculated and planned to create communal polarisation in a landscape where such feelings never existed. Indeed, tribals or adivasis in Jharkhand have never nourished such hate politics, nor were they hardline supporters of extremist Hindutva, especially because anthropologically and historically they really do not belong to the caste hierarchy of the Hindu ‘varnavyavastha’, though the ritualistic attributes of Hinduism has certainly seeped into their culture as well over the years. However, they neither hate Muslims nor Dalits, nor are they very powerful in the social or political hierarchy. If anyone, their only revered hero is young Birsa Munda, the charismatic tribal leader who led a massive, violent and spontaneous rebellion against the British in late 19th century, and who was reportedly killed in prison.

That is why, it is not difficult to unravel the ‘modern’ one-dimensional pattern in the gory public spectacles that is mob-lynching, especially in Jharkhand. A study of such cases will bear testimony to this phenomenon.

In July this year, at Saraikelan in Jharkhand, a newly married and young Tabrez Ansari was tied to a tree and brutally beaten up as a public spectacle overnight even as he was made to say ‘Jai Shri Ram’ by men who were openly aligned to right-wing extremist Hindutva outfits, sporting saffron mufflers. Those who did not take part in the beatings, cheered the culprits and recorded the event on phone cameras.

Tabrez was taken to the police station after he lost consciousness and kept there, and by the time he was taken to the hospital, it was too late. Tabrez’s alleged ‘murder’ and lack of police action led to massive outrage and angry protests across India, even while it marked yet another dark chapter in the chronology of mob-lynching across India, especially in Jharkhand, the state ruled by a BJP-led government.

Often, the lynching is also an ‘economic hate crime’ derived by vested interests and social jealousy. The killers use the apparent impunity they enjoy to push their macabre agenda. It’s a dark irony, but given the circumstances, there are cases when mob-lynching really makes good business sense.

On March 18, 2016, a 32-year old cattle trader, Mazlum Ansari, and a schoolboy Imtiyaz Khan, who would assist Ansari, were found hanging in Latehar, Jharkhand. A group of men, allegedly Hindutva musclemen, had threatened Ansari to cough up money if he wanted to continue with the trade. The killers used nylon chords used to tie cattle in tying up the two victims, sending a message through the act. The case, which created headlines, was not the only such incident.

On August 19, 2017, Murtaza Ansari and Ramesh Minz were beaten to death by a mob in Godda district in a love jihad case. On September 9, 2018, Wakil Khan was lynched by a mob in Palamu.

Another case belongs to Alimuddin Ansari in Ramgarh, Jharkhand. The Tropic of Cancer crosses Ramgarh’s outskirts, surrounded by green hills and dense forests. ‘Selfies’ are popular at this spot. In its bustling market, Alimuddin was lynched by a mob on June 29, 2017. He was accused of carrying beef. Most of those charged were associated allegedly with the with the Sangh Parivar and cow vigilante groups. Of them, 11 of the accused were sentenced to life-imprisonment by a fast track court in July 2018.

The high court gave some of them bail. Surprisingly, then Union minister Jayant Sinha chose to garland the accused and gave them sweets. His picture garlanding them became viral in the media. He had openly backed them through the trial.

Maryam Khatoon, Alimuddin’s widow, had this to say: “What great act did they do to deserve being garlanded by a big minister and given sweets? How can this government be proud of them? What message are they sending to the country by doing this public act of felicitation? Do they realise how it hurts us and our entire community, and all those who believe in the Indian Constitution?” The questions have remained unanswered.

That it polarises the entire area into deep and irreconcilable communal fault lines, is a priori. That these fault lines help certain forces in the elections, too is inevitable and proved. In the final analysis, truly, it seems as if one or several masterminds are operating on a pre-determined chess board, practising their heinous moves, playing this sinister game with no remorse which unleashes nothing but violence and tragedy.