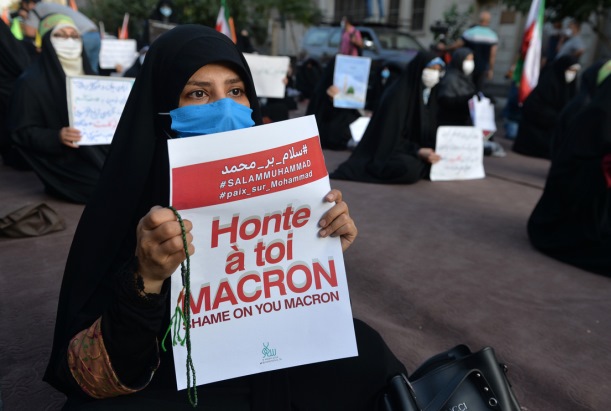 Macron Agenda To ‘Liberate’ Islam Has A History

The recent storm over the inflammatory statements against the Holy prophet and Islam itself, by the French President Macron has set the Muslim world on fire. Leaders of all hues and denominations have condemned the so-called latest attacks on Islam. The outcry as expected follows a similar pattern after any anti-Islam incident takes place in the Western world. We need to take a deep breath, pause and wonder on the similarity of attacks and the Islamic response to it globally.

Muslims, unlike other followers of the ‘books’ do not believe in ruminating about the past. Instead they move on with times. While the two other communities, which follow the book, impart their young generations about the atrocities faced by them in the past, instil anti-Islam feelings in them. Alongside the western world also continues with its activities related to interfaith relations and peaceful coexistence.

In real terms one wonders whether these activities are indeed carried out with intentions or are just an eyewash, while beneath the surface anti-Islam hatred continues unabated, as they are in real terms afraid of Islam and its teachings.

What has happened in France is nothing new. The French radical extremism, legitimises itself under the French term laicité meaning secular, and under this garb it continues its attacks on French and non-French Muslims, and this deceiving is nothing new.

A French NGO, The Collective Against Islamophobia in France (CCIF) listed 1,043 Islamophobic incidents that occurred in 2019 (a 77 percent increase since 2017). Not so far back, in October 2019, French President Emmanuel Macron and his then Interior Minister Christophe Castaner connected terrorism in France to any signs of French Muslims’ faith and culture, including having a beard, praying five times a day, eating halal food, etc.

Last week, Macron declared “Islam is a religion that is in crisis all over the world today, we are not just seeing this in our country”. He added that he is seeking to “liberate” Islam in France from foreign influences by improving oversight of mosque financing.

One wonders who gave the right to Macron to ‘liberate Islam’. Historically, Macron is not the first French ruler who wanted to “liberate” Islam. This is an old French “secular” tradition from the times of Napoleon Bonaparte. When Napoleon invaded Egypt and Palestine in 1798, he lied to the Egyptians by announcing that he and his army were “faithful Muslims” and that they have come to liberate Muslims and Islam from the tyranny of the Turk Mamluks.

However, the deception did not work and both the Egyptians and Palestinians rose against him. Napoleon was defeated, though his army committed untold atrocities in Egypt and Palestine. At that time Napoleon and France wanted to avenge the defeat faced by French forces in the Palestinian city of Acre, two centuries ago.

The French invasion of Algeria was launched in mid-June 1830 and Algiers fell on July 5. The French army robbed Algiers’ treasury clean, stealing upwards of 43 million Francs in gold and silver. The French King Charles X told the French National Assembly that the immediate goals of the invasion were to avenge the French for the Algerian insult, besides “ending piracy and reclaim Algeria for Christianity”.

In line with its Christian commitments, the conquering French army took over mosques and converted them into churches and cathedrals at gunpoint, including the largest Ottoman Ketchaoua mosque in Algiers, built in 1612, which was converted into the Cathedral of St Philippe in December 1832. That same year the French wiped out the entire tribe of the Ouffias, sparing no woman or child, and seizing all their possessions.

We should not forget the French barbarism, which has been recorded for posterity by history. Authors like Martin Evans, John Phillips, Haley C. Brown have documented in-depth the French atrocities in Algeria in their books. It would also be pertinent to note here that the French played a crucial role in persuading the Algerian ulemas and clerics to close the doors of Ijtihad, which ultimately made a crucial and long lasting affect on the growth of Islamic sciences and social sciences.

In 1871, Algerian Muslims revolted again against French rule, with 150,000 people joining the forces of a local tribal leader, Al-Muqrani. The French genocidal machine responded by killing hundreds of thousands of Algerians, which, combined with the French-caused famine deaths in the late 1860s, resulted in the death of one million Algerians. The French razed dozens of towns and villages to the ground while eliminating the entire elite of Algerian society. But even that did not resolve France’s “crisis” with Islam.

During the 19th century, France colonised many Muslim nations, and thus their concern about their “crisis” with Islam increased further. To answer this quest, a journalist of ill repute and with known anti-Turk views was appointed to seek answers. Edmond Fazy (1870-1910) presented his analysis in the form of Questions diplomatiques et colonials, which contained submissions by known anti-Muslim and anti-Turk academics, journalists or so-called experts on Islam and African nations. Edward Said has discussed the real role of these so-called Orientalists in-depth in his book Orientalism (1977).

Chauvinism and hate have always dominated the French culture, whether it is with the British or Islamists. Many of the contributors to Fazy’s journal saw fit to manipulate Islamic theology and transform Muslim ulemas to produce not only a modern Islam that European modernity would tolerate, but also one that, they hoped, would weaken the Ottoman Empire.

The project of transforming Islam into something compatible with European Christianity and which French laicite can tolerate continues afoot in 2020, but with unsatisfactory results as far as Macron is concerned.

Both the French Muslims and immigrant Muslims continue to face an institutionalised discrimination in France. The country continues to be submerged in a dominant discourse of chauvinism and hate today that is not dissimilar to the one that always dominated French culture even before the French Revolution.

The current French crisis is based on its White supremacist Christian agenda and a country holding on to its past glories or misdeeds, while in reality they should strive to undo or repent their misdeeds committed by them in the former colonies held by them.

What the French need to do is to pay back the debts they owe to all those whom they robbed and killed around the world since then. Only that will end France’s crisis with “Islam” and with itself.

At the same time, Muslims across the globe need to connect or reconcile their national, ethnic and sectarian identities within the context of Islam’s inner unity and integrity based on moral and human grounds, on the one hand, and maintain its global and cosmopolitan outlook on the other. This will be the best antidote against such vitriolic agenda.

(Asad Mirza is a political commentator based in New Delhi. He writes on issues related to Muslims, education, geopolitics, and interfaith)