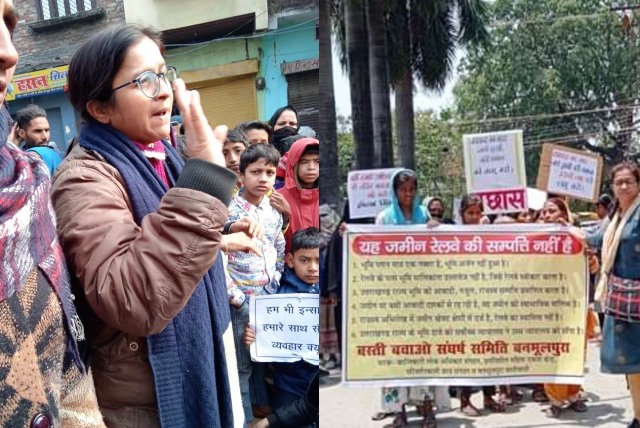 ‘Media Looks At Haldwani Eviction Issue From A Communal Lens’

Rajni Joshi, the convener of Basti Bachao Sangharsh Samiti in Banphoolpura, explains the origin of alleged encroachment issue in Haldwani, and the media’s attempt to communalise it

The issue of eviction in Banphoolpura, Haldwani which abruptly got national attention in the last week of 2022 and drawn the Supreme Court attention, is something that we have been engaged in since 2007 with Krantikari Lok Adhikar Sangathan, a socio-political organisation. This issue needs to be understood in two parts.

The total population of Banphoolpura is around 60,000 with a total of 4,365 families residing in various colonies and hamlets. A part of this is Ghafoor Basti and Dholak Basti, which comprises around 3,000 people. These two hamlets are claimed by the Railway as encroached land due to their proximity to the railway line. In 2007, the district administration wanted to evict these people and demolish the two settlements. We opposed this move and demanded fair rehabilitation before eviction.

The then Chief Minister ND Tiwari wrote a letter for the rehabilitation of these two settlements. The High Court also directed the District Magistrate to rehabilitate these people on the other side of the Gwala river. However, the rehabilitation process was not carried out in a proper manner.

When people started relocating to the other side of the Gwala river on oral orders, the forest department claimed that it was their land and would not allow them to settle. Eventually, the relocated people were sent back. They again raised hutments and slums adjacent to the railway wall.

So, what was essentially an encroachment issue way back in 2007 did not get resolved in the absence of a relocation policy. The people of Ghafoor Basti and Dholak Basti are living there for over 50 years though it is also true that they are possibly encroachers they need to be properly rehabilitated and relocated. This is our demand to date.

ALSO READ: ‘Bulldozer Is The New Symbol Of Communal Oppression’

As for the other lot that comprises around 57,000 people of Banphoolpura, it is clear that most of them have formal ownership and land titles dating back to 1914. This settlement is as old as 1815 and the Railways is claiming this land on the basis of a map dated 1959. Here, people pay taxes; they have functional government schools, dispensaries, and other institutional structures that speak at the outset that this is a legalized settlement. So there is no point in them getting relocated anywhere. We are demanding that they not be evicted in the first place.

These two issues got mixed up in the course of a 2013 PIL filed in the High Court by the BJP leader Ravishankar Joshi over a bridge collapse on the Gwala river. The High Court had ordered the setting up of a team to inquire about the reasons behind the bridge collapse. The team observed that it happened because of illegal mining by encroachers on railway land. The whole matter then got diverted to the encroachment.

In 2016 the state government claimed that it was their land and in fact, the railway was encroaching by expanding its limits. In 2022, Joshi again filed a petition but this time it had nothing to do with the bridge; rather he demanded the eviction of encroachers on the railway land. The state government changed its stance and agreed that the land belonged to the Railways.

In March 2022 we formed the Basti Bachao Sangharxh Samiti with representatives from many socio-political organizations of Haldwani. The Samiti filed an independent case in the High Court demanding relocation and rehabilitation for Ghafoor Basti and Dholak Basti residents while stopping the eviction of the rest. These two demands were entirely different depending on the character of the settlement but somehow they got mixed up in the course of the hearing. We approached Senior Advocate Colin Gonsalves to pursue the matter in a higher court.

The media and outsiders came into the picture when Ghafoor Basti and Dholak Basti were highlighted by a section of people as predominantly Muslim settlements. The media jumped on the scene and projected the narrative as Muslim settlers. Essentially, all these people are from the working class, whether encroachers or not. We have treated them as a single entity. There is no division inside the Banphoolpura community but the media has been trying to divide it into communal lines.

There is hope after the SC stays on the eviction notice. We do not care who gets credit for this success. Being a socio-political activist, I only care about people’s lives and their concerns. Essentially people’s resistance and peoples organizations are behind this success, like Uttarakhand Parivartan Party, Inqalabi Majdoor Kendra, Pragatisheel Mahila Ekta Kendra, Pragatisheel Chhatra Sangathan, Samajwadi Lok Manch, and many more. We all are trying to convert this resistance into a larger movement at the state level.