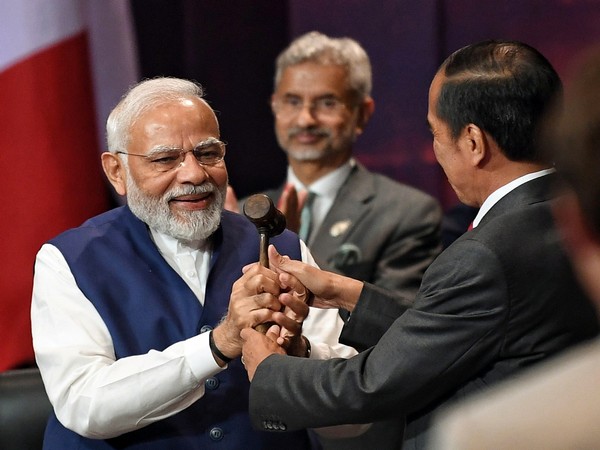 Prime Minister Narendra Modi, while addressing the 95th episode of his monthly radio programme ‘Mann Ki Baat’ on Sunday lauded a weaver from Telangana who gifted him a self-woven logo of the G20 Summit which will be hosted by India next year.

Mentioning Veldi Hariprasad Garu who hails from Rajanna Sircilla district of Telangana, the Prime Minister said that he has a mastery over his skills and he was “surprised to see this amazing gift”.

“A weaver from Rajanna Sircilla district of Telangana Veldi Hariprasad Garu has sent me a self-woven logo of G20. I was surprised to see this amazing gift. He has such mastery over his skills that it attracts everyone. He also sent me a letter. He says that hosting the G20 Summit next year is a matter of immense pride for India. To celebrate this achievement, he made this logo. he inherited this talent from his father,” he said.

“Today, many people like Hariprasad Garu have sent letters to me saying that their hearts have swelled with pride at the country hosting such a big summit. They have highly appreciated India’s pro-active efforts regarding G-20,” PM Modi added.

The Prime Minister said that he had the privilege of launching G20 logo and website of Presidency of India, and the logo was chosen through a public contest.

“When I received this gift sent by Hariprasad Garu, another thought came to my mind,” he said.

The Prime Minister said that India’s Presidency of the G20 Summit shows India’s growing importance on a global stage.

“Leading a group of nations that account for 85 per cent of trade is a huge responsibility and opportunity,” he said.

Calling the G20 presidency an “opportunity” for India, the Prime Minister said that the country has to focus on global good.

“G20 presidency is an opportunity for us. We have to focus on global good, be it peace, unity or sustainable development, India has the solution to challenges related to these things. We have given the theme of ‘One Earth, One Family, One Future’,” he said.

“I extend warm welcome to you all in ‘Mann Ki Baat’, once again. We are fast moving towards the century of Mann Ki Baat. Before every episode, reading letters, listening to audio messages; it is like a spiritual experience for me,” the Prime Minister added. (ANI)