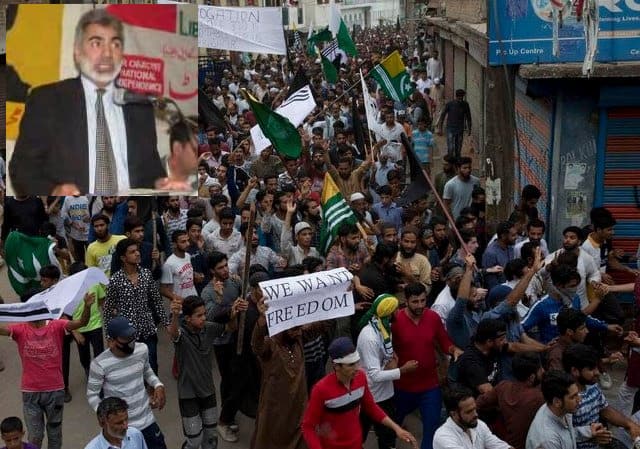 To bring our readers a separatist’s view on the Kashmir issue, LokMarg speaks to Zafar Khan, head of diplomatic affairs in the Jammu & Kashmir Liberation Front (JKLF). Khan believes that by abolishing Article 370, India has taken the status quo in the state back to August 1947. Now, he insists, it is no longer a regional issue between the two countries and the international community must assert on tripartite talks.

What do you make of this step taken by Government of India on Article 370 and 35A?

Article 370 defined a temporary constitutional relationship between Jammu Kashmir and India. Its abolition does not mean Jammu and Kashmir becomes a territory of India. What this chauvinistic and confused Government’s betrayal of an agreement made to the international community in fact means is that there is no longer a bridge between Jammu Kashmir and India. In reality and under international law, Jammu Kashmir has reverted to its constitutional position which it had prior to creation of Pakistan, and modern India on 14 and 15 August 1947 respectively. In other words, the temporary and provisional accession of Jammu Kashmir with India no longer exists. Indian position in Jammu Kashmir today is that of an occupying power without legal justification to be there and hence open to international interference. This now opens the long dreamt legitimate hope of the people of Jammu Kashmir gaining complete independence because the status quo has been pushed back to the 1947.

Today as India holds on to Jammu Kashmir with its military might, brutal force and brazen denial of the inherent, inalienable and internationally recognised sovereign right to self-determination of the people in Jammu Kashmir, it is important to appreciate some legal and constitutional facts as well as responsibilities under international law.

But article 370 is part of the Indian constitution and India can change any constitutional article by its majority if it wants, can’t it?

Article 370 of the Indian constitution defined the sphere of responsibilities between Jammu Kashmir and republic of India pending resolution of the Kashmir issue through UN sponsored Plebiscite. Under article 370, India was responsible for defence, Foreign affairs and Communications. While 35A protected in particular property rights and citizenship. Article 370 didn’t make Jammu Kashmir part of India. It is only part of the Indian constitution for convenience of Indian State to define its administrative status with Jammu Kashmir. India does have right to change aspects of its constitution but by rescinding it, India is effectively breaking that relationship and its arrangement thereby restoring the status of Jammu Kashmir to pre Article 370. It does not have the right to occupy, or change the status of Jammu Kashmir because the State is not part of India. To date and after the 1948 war between India  and Pakistan, the partitioned Jammu Kashmir has been known as Indian occupied Kashmir while Azad Kashmir has been called Pakistan occupied Kashmir.

What about the treaty of accession?

The treaty of accession between the ruler Hari Singh and India was challenged by Pakistan because the will of the people had not been taken into account. It was offered by India at the UN to have Article 370 as a temporary measure until a plebiscite was held. There have been 15 UN resolutions concerning India and Pakistan and there was the 1972 Shimla Accord with Pakistan. In all these the third party in dispute was and continues to be the people of Jammu Kashmir.

Unlike Modi, who has essentially land grabbed Jammu Kashmir, one of the founding fathers and first Prime minister of independent India, Pandit Jawaharlal Nehru, declared in a statement in the Amrita Bazar Patrika of Calcutta on 2 January 1952 that “Kashmir is not the property of India or Pakistan. It belongs to the Kashmiri people. When Kashmir acceded to India, we made it clear to the leaders of the Kashmiri people that we would ultimately abide by the verdict of their plebiscite. If they tell us to walk out, I would have no hesitation in quitting Kashmir.” He continued by affirming that “we have taken the issue to the United Nations and given our word of honour for a peaceful solution. As a great nation, we cannot go back on it. We have left the final solution to the people of Kashmir and we are determined to abide by their decision.”

Is there ambiguity which enables India to see the situation differently and think it has to integrate Kashmir with rest of India?

There is no ambiguity. What ambiguity? By derogating from the promise made by India’s first Prime Minister India has colonised Jammu Kashmir. India has now deployed well in excess of 800,000 military and paramilitary forces to occupy Jammu Kashmir, disregarding internationally accepted agreements and commitments and violating human rights with impunity. While Modi calls this integrating Jammu Kashmir with rest of India, the simple historic and legal facts seem to have been missed in the calculation. They cannot be ignored.

The presidential order on 5 August 2019 with which Modi government annexed Jammu Kashmir and dismembered its political and territorial unity by its absorption of the entire Indian occupied part of the state as a union territory with direct rule from New Delhi has no locus standi. It is plain and simply an invasion and an illegal occupation, continuing colonialism under a new regime. This day will for ever be etched in the memory of Jammu Kashmir citizens as a black day, and a catastrophe, and a day of Nakba on both sides of the ceasefire line in Kashmir and throughout the world.

On this day, India’s communalist and chauvinist leadership, representing the so called largest democracy in the world, disdainfully with a stroke of pen, defied the international community by disregarding international agreements, the regional commitments and the promise to the people of Jammu Kashmir. Human Rights violations have increased exponentially.

What sort of human rights have been violated?

You don’t need to take our word for it. The Office of UN’s High Commissioner for Human Rights published its second report on 8 July 2019 to follow its first ever report on human rights situation in Kashmir of 14 June 2018, which  identified human rights violations and use of militarised violence with impunity against civilian population, and recommended among other things that the  Armed Forces Special Powers Act AFSPA, which gives complete immunity to the security forces must be repealed, and recommended that changes to the draconian Public Safety Act, P S A, should be made to make it consistent with international law.

The UNHCHR has asked the Indian government to be allowed to visit both Indian and Pakistani sides of the divided land to investigate and verify allegations of human rights violations. But India has consistently refused to accede to the request of the Human Rights Commissioner. Ironically Indian government demands that it should be made a permanent member UNSC.

Now an iron curtain has descended over Jammu Kashmir and the huge occupation force has imprisoned millions of men, women and children in their own homes. Thousands of para military and military troops are taking out flag marches throughout the cities, towns, hamlets and villages of Kashmir to instil fear, and awe of the Indian state’s oppressive power. Internet and telephone service are disconnected and an indefinite curfew on the helpless population is enforced at gun point. This is against international law.

Is there a way forward?

Nehru’s statement in 1952 in fact explains the essence of the Kashmir issue. Because at the heart of the conflict in Jammu Kashmir, lies the fundamental principle of the, inherent and inalienable sovereign right of Kashmiris to determine their political destiny. Nehru as well as other Indian leaders in the past including even Atal Bihari Vajpayee, the first ever BJP Prime Minister of India accepted, and respected the democratic rights of the Kashmiris but Modi and ultra-chauvinist successors are nothing like Vajpayee. As a staunch Hindu, Vajpayee, believed and followed god Ram who was legendry for upholding promises and ethics. Which god is Modi following? Modi is not Vajpayee. He does not come close to him.

What if India does not accept your proposition?

As Kashmiris we strongly believe that the history of the almost seventy two year old Kashmir dispute is full of betrayals, duplicity and hypocrisy by India in particular, indifference and abandonment of Kashmiris’ basic rights by the big regional and other powers.

In this desperately fraught situation with national annihilation of the Kashmiri nation under the oppressive onslaught of Indian juggernaut, people of Jammu Kashmir justifiably appeal for support in their struggle to exercise their national self-determination. Kashmiris have always sought to make their country a bridge of peace in South Asia.

Now the international community must intercede since by unilaterally rescinding Article 370 and 35A, India has taken the situation to pre August 1947. India must be made to engage in dialogue with the people of Jammu Kashmir and Pakistan under the United Nations auspices for a just and equitable resolution of the issue.

Is there anything else you wish to say?

The post August 1947 arrangements have ended, hence the international community should insist on tripartite talks and demand the release of leaders like Yasin Malik and others, illegally incarcerated. It should insist on lifting the ban of political parties like the JKLF which is committed to a peaceful political solution of the long standing Kashmir issue. In fact there is a hearing next week in front of the tribunal to lift the ban which should never have been placed in the first place. JKLF is a peaceful political organisation representing the aspirations of all Kashmiris regardless of their religion or background. An international mediated way forward starting the clock from 1947 is now the only way forward to extract the region out of the Kashmir imbroglio. Modi has unwittingly brought it to this, now the international community must act.

(Zafar Khan is a retired academic. He has served JKLF in political and diplomatic fields for 41 years. The views expressed are his own)