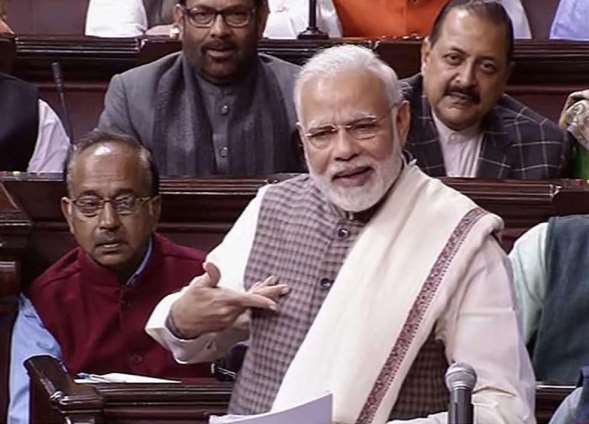 Modi Govt Has Lowered The Stature Of Upper House

Addressing the start of the 250th session of the Rajya Sabha last week, Prime Minister Narendra Modi described the Upper House as the “soul of India’s federal structure” and that it is about checks and balance but went on to add that there is a “difference between checking and clogging, balance and blocking.”

Modi’s statement, underlining the importance of the Rajya Sabha, had a touch of irony to it. That’s because ever since the Modi government came to power in 2014, it has made systematic attempts to undermine the Upper House where it was in a minority. His ministers and Bharatiya Janata Party leaders often referred to the Rajya Sabha as a stumbling block, stating angrily out that the Opposition should not stall the government’s legislative agenda as their party had got the people’s mandate to rule.

Modi’s remarks also revived an old debate about the relevance and importance of the Upper House and India’s decision to settle for a bicameral system of legislature. This was a subject of animated debate in the Constituent assembly which drew up the country’s Constitution.

As was to be expected, opinion on this was divided with those arguing against the need for a second chamber, saying it would  “act as a clog in the wheel of governance” and that it would be undemocratic since it would have the powers to veto the decisions of an elected House. On the other hand, those who were in its favour stressed that decisions taken hurriedly and due to political pressures can be deliberated upon in detail without any such compulsions in the second chamber. Not only can such an exercise improve the quality of legislation but also act as a check on any rushed move by a government.

The debate in the Constituent Assembly was based on a report of the Union Constitution Committee submitted by Jawaharlal Nehru. This document provided details about the composition, role and functioning of the second chamber. The debate eventually ended with the Constituent Assembly deciding in favour of a second chamber on the ground that it would reflect the country’s pluralistic character and provide a forum for the states to put across their views as the second chamber was proposed to be a council of states.

Over the past years, the Modi government has not just attempted to thwart the functioning of the Rajya Sabha but this attitude has also been extended to the Lok Sabha where it has the advantage of a stronger bench strength. It, therefore, tends to rush through it is business by stonewalling the opposition’s demands to refer important Bills to Parliamentary standing committees for detailed scrutiny.

The opposition-dominated Rajya Sabha has been an irritant for the Modi government since 2014 and it is only recently that the BJP and its allies have inched closer to the majority mark. While the BJP improved its tally after it won a bulk of state elections, it also engineered defections from other parties to ensure that numbers in the Upper House did not come in its way in pushing ahead with the government’s legislative agenda. For instance, it was only after it was certain that the opposition no longer enjoyed an edge in the Rajya Sabha that the Modi government brought the triple talaq bill and the bills stripping Jammu and Kashmir of its special status and bifurcating the state into two Union Territories.

In fact, Modi’s first brush with the Rajya Sabha came after he first rode to power five years ago. Euphoric over the BJP’s impressive win, Modi soon realized that despite the ruling alliance’s big majority in the Lok Sabha, his plans to enact legislation was not possible as it was in a minority in the Upper House. His government hit a wall in the Rajya Sabha which did not allow the passage of its initial two reform legislation, the Land Acquisition Bill and the Goods and Services Tax Bill. The opposition had then forced the government to refer them to a Parliamentary panel. While the GST Bill was eventually passed after several rounds of meetings with opposition parties, the land Bill was eventually abandoned.

This had led furious BJP ministers to rail against the functioning of the Rajya Sabha  with Arun Jaitley, then finance  minister, to declare that the Indian democracy faced a serious challenge as an “indirectly elected” Upper House was questioning the wisdom of the “directly elected” Lower House.

Instead of reaching out to the Opposition and opening channels of communication with members on the other side of the political divide, the Modi government started circumventing the Rajya Sabha by converting bills into money bills. The Upper House does not have the authority to vote out a money bill.

It was left to former Prime Minister Manmohan Singh to refer to these moves by the  government when he spoke after Modi’s address on the first day of the Rajya Sabha’s 250th session. “In the recent past, we have seen instances of misuse of the Money Bill provision by the Executive leading to bypassing the Rajya Sabha on crucial legislation of national importance without any deliberation. Those in treasury benches must ensure that such instances are avoided,” Singh remarked.

Singh also made a valid point when he drew attention to the hurried manner in which the Modi government pushed through the Bills on Jammu and Kashmir by giving MPs no time to study the legislation, which was tantamount to belittling the Upper House.

“This House should be given greater respect by the Executive than is the case now,” Singh stressed, adding that far-reaching proposals like abolishing certain states and converting them into Union Territories must be discussed at greater length in the Rajya Sabha as it is a Council of States. In fact, he went a step further saying the Upper House must be given greater powers to deal with issues like these.

This debate on the role and functioning of the Rajya Sabha will continue as long as a ruling party does not enjoy a majority in both Houses. It is only then that political leaders find merit in opting for a bicameral system of legislature.