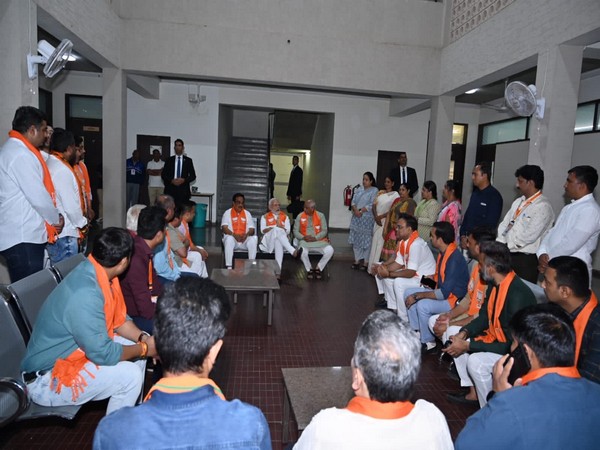 After power-packed campaigning and addressing four rallies, Prime Minister Narendra Modi on Sunday chose to go to ‘Kamalam’, the Bharatiya Janata Party (BJP) headquarters in Gandhinagar, and spend some time with party workers and colleagues.

While his sudden visit was surprising for many, it was a pleasant meeting for quite a few who spent a couple of decades working for the party.

Sources told ANI that it was a “light and fun” conversation as the Prime Minister walked into the Kamalam office and instead of going into a room, he chose to sit in the open area and on the benches. Initially, only a few people who were working in the party office late in the night came and welcomed the Prime Minister. However, PM Modi asked that everyone who was there in the party office should be called.

Much of the conversation between the Prime Minister and party workers were on how each of them was doing and whether they were maintaining good health.

Modi, who is known to focus on the tiniest of details, even checked with party workers whether their food gets arranged properly, as most of them work at the party headquarters for long hours, especially during the elections time.

A source told ANI that the youth workers who have been associated with the BJP for not long were really impressed to see that the Prime Minister addressed most of the old party workers by their names and even joked with them rekindling the memories that dated back years ago.

In fact, some woman workers who were at the party office and interacted with the Prime Minister also got emotional with PM Modi’s gesture and the kind of love and respect how he had for his party colleagues despite being in such a high office, a source said.

Prime Minister Narendra Modi who is in poll-bound Gujarat, on Sunday addressed rallies in Veraval, Dhorarji, Amreli, and Botad.

Earlier on Sunday, he reached the Somnath temple to offer prayers.

The Assembly polls in Gujarat will be conducted in two phases, on December 1 and 5. The counting of votes will take place, along with those of Himachal Pradesh, on December 8.

The state has been a BJP stronghold for a long and the party has set its sights on returning to power with a handsome majority this time as well.

However, it faces a stiff electoral challenge from the Arvind Kejriwal-led Aam Aadmi Party (AAP), which has named Isudan Gadhvi as its chief ministerial candidate.