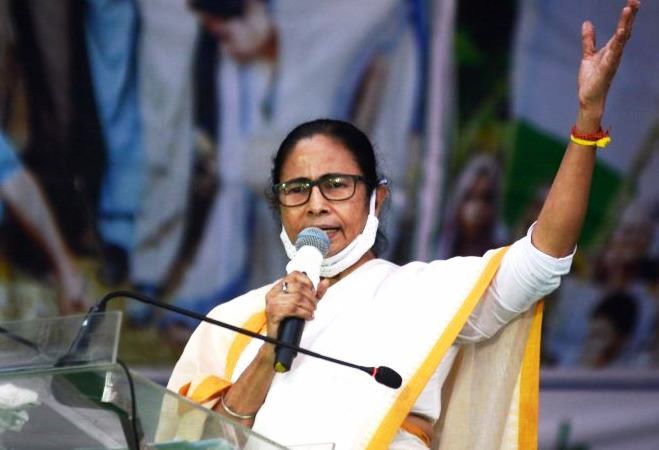 As the poll fever intensified ahead of the West Bengal Assembly elections and Trinamool Congress leaders joining the ranks of the Bharatiya Janata Party, Chief Minister Mamata Banerjee on Monday targetted the Central leadership and said that “Prime Minister Narendra Modi will soon rename the country after his name.”

“He got his picture on the vaccine (certificates). It is not a COVID vaccine, it is a Modi vaccine. He has colleges in his name. stadiums in his name. And, now vaccine in his name. It is just a matter of time, he will soon rename India after his name,” Banerjee said while addressing the people of the state after completing her padyatra.

She further alleged that the top leadership of the Bharatiya Janata Party (BJP) give false statements during poll campaigns in West Bengal.

“Amit Shah and PM Narendra Modi are two syndicate ministers who come to Bengal and speak canards and lies. I respect the chair of a Prime Minister but it is surprising to see a Prime Minister speaking lies,” stated Banerjee.

The chief minister expressed greetings on the occasion of International Women’s Day.

“I wish happy International Women’s Day to every woman. This is the land of Matangini Hazra and Mother Teresa. Women are our pride. We celebrate this day as Naari Mukti Divas. We cannot tolerate atrocities on women,” added Banerjee.

On the occasion of International Women’s Day, Mamata Banerjee held a 4.5-km long march that started at College Square and concluded at Dharmatala in Kolkata.

Trinamool Congress and BJP are in loggerheads ahead of the Assembly polls in West Bengal. West Bengal Assembly elections will be held in eight phases starting from March 27 with the final round of voting taking place on April 29. The counting of votes will take place on May 2. (ANI)