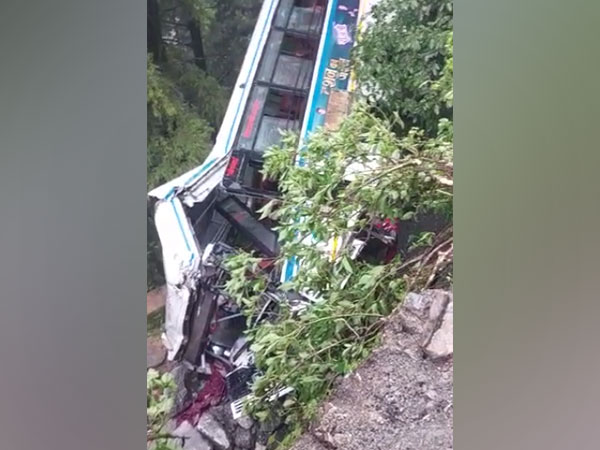 Several people were injured after a roadways bus carrying 39 passengers fell into a deep gorge near the Indo-Tibetan Border Police (ITBP) Academy in Mussoorie on Sunday afternoon, said ITBP.

So far, no fatalities have been reported.
Personnel of ITBP Academy rushed to the spot and evacuated the injured, as per ITBP.

The bus was coming from Dehradun and was going towards Mussoorie. The bus went out of control and fell into a gorge near ITBP Academy.

As soon as the information was received, the police-administration team left for the rescue on the spot.

The injured passengers have been rescued and admitted to the Civil Hospital.

Incessant rain has also become a problem for the rescue team.

Earlier on July 30, amid the ongoing orange alert in the northern state of Uttarakhand, a part of the Badrinath National Highway-7 (NH-7) was washed away due to the rising water in the Khachda drain located at Lambagad.

Following the incident, pilgrims were stranded on both sides of the highway.

In another incident, teachers of an inter-college in Uttarkashi helped their students cross an overflowing drain after a heavy downpour. The students and teachers formed a human chain in order to cross the flowing waters.

Earlier on Friday, a landslide was reported at Nainital Bhowali road in Nainital.

“The road is completely damaged. It will take at least a week to restore it” said Dheeraj Singh Garbyal, DM, Nainital.

Warning of heavy rainfall in the region, the Dehradun Meteorological Centre flagged an orange alert for the next four days starting July 29. The areas included in the alert are Dehradun, Nainital, Tehri, Pauri, Champawat and Bageshwar. (ANI)