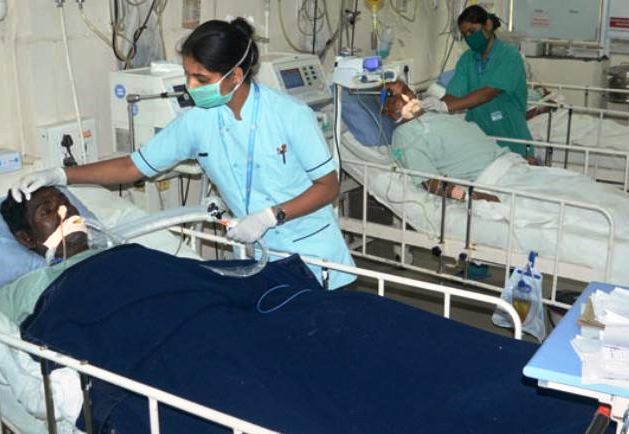 At all times in India before the outbreak of Covid-19 pandemic, government hospitals and other health centres in urban, semi-urban and rural areas were overwhelmed by patient visits with all kinds of ailments as majority here do not have the means to avail treatments at private hospitals and nursing homes. To the extent there has been private investment in the health care system since the start of liberalisation in 1991 heralded by the likes of Apollo, Fortis and Max, the load is off from government sector.

Unfortunately, even while medical experts and welfare economists are recommending that investment in health (and also education) has a positive bearing on sustainable GDP growth, New Delhi in its wisdom made an allocation of less that 1.5 per cent (₹67,484 crore) in the 2020-21 Union budget for the health sector. Here it needs recalling that Prime Minister Narendra Modi himself talked about the sector ideally claiming at least 2.5 per cent of national budget.

Because of the failing of the government manifest in insufficient investment in health care over the years, people at large are paying a heavy price during the current pandemic. India’s Covid-19 tally has already crossed 8 million with around 45,000 people contracting the virus daily. Mercifully, the recovery rate here is 98 per cent and death rate at 2 per cent is lower than in most other countries. Indians are not known to be disciplined even in the face of a looming danger. The world has been witness to an identical behaviour of a large number of citizens in many developed countries, all leading to exacerbation of the global health crisis.

The Indian festive season has begun with Durga Pooja to be followed by Diwali and ending with the Christmas and New Year. With thousands milling around in festive celebrations throwing caution like mask wearing and social distancing to the wind, a second wave of coronavirus is logically feared.

ALSO READ: Virus Is There, Fear Is Gone

Doctors, paramedics and nurses are already a highly stretched community working without a break. Many of them contracted the virus in the process with quite a few dying. Now when hospitals and nursing homes have made it known that in case of a second wave during the not faraway winter infecting a larger number than now, they will not be able to provide beds to all the sick people. Why only beds, the Indian health sector on whose services demand is made by 1.38 billion people and also growing numbers from neighbouring countries, particularly Bangladesh suffers from considerable shortages of doctors and nurses by World Health Organisation (WHO) benchmark.

We have in India 6.4 allopathic doctors, nurses and midwives per 10,000 compared with WHO recommended 22.8 persons per 10,000. No doubt, the health care system here was stressed out before coronavirus hit the country. The situation has only become worse both for medical staff and people needing care since the third week of March when the country went for a comprehensive lockdown to fight the pandemic.

This certainly is not the time when the country can afford to lose any more of its nurses to foreign countries however desperate they may be to shore up their medical support system. But only recently, according to United Nurses Association, Maharashtra chapter, close to 500 nurses made it to the UK, traditionally an alluring destination for Indian Florence Nightingales. They are drawn to the UK and several other countries for much better pay, social security and quality training facilities leading to assured career development. Unfortunately, the profession that should automatically command respect has long been neglected in India with nursing commanding a low status in medical hierarchy.

In attempts to address shortages of qualified human resources in its famed National Health Service (NHS), the UK government introduced a fast-tracked visa for medical professionals in November 2019. To top it off, the eligibility criteria for job entitlement has been revised to the advantage of Indian doctors and nurses.

Why only the UK, other developed countries where English is the medium of communication such as the US, Australia and New Zealand are always welcoming the services of doctors and nurses from India. In consequence, India continues to lose one section of medical professionals at a rate faster than ever before when, according to one reliable estimate, we will need over 30,000 nurses in the next few months.

Moreover, as the medical services are expanded principally by private sector investment and the government too remains engaged in beefing up facilities in rural centres, India will need extra 2 million nurses in the next five years. Acceleration in migration speed in recent periods makes one wonder about the feasibility of achieving the targets. Shortages of nurses are becoming acute this year as around 250,000 who graduate around this time every year could not join the job market with the pandemic standing in the way of final examinations being held.

In any case, according to a recent government submission in the Rajya Sabha, the country has 3.07 million registered nursing personnel (nurses, midwives, women health visitors and auxiliary nurse midwives). This works out to 1.7 nurses per 1,000 people, 43 per cent less than the WHO norm of 3 per 1,000. At the same time, like in so many other sectors, a large number of women with some kind of basic training and skills but without official registration offer their services in their localities. There is an exponential growth in the number of nursing colleges from 30 in 2000 to over 1,800 now, thanks to leading private hospital chains and also practising non-resident Indian doctors making significant investments.

Students of nursing and midwifery have the option to do either a diploma course or a four-year degree course that allow them registration with Indian Nursing Council. Since the courses are conducted in English and young nurses seeking migration are proficient in conversing in that language, they settle down easily in English speaking countries. The Gulf countries too are an important migration destination for Indian nurses. Their only competition is from nurses from the Philippines.

Nursing courses in private institutions are expensive and the students are required to borrow money from banks to fund their studies. So the pressure is on them to clear their borrowings once they have earned their diplomas and degrees. Let’s see what at the entry level nurses get here and in the preferred foreign destinations. The government on the basis of recommendation of seventh pay commission has fixed the starting salary of nurses in its hospitals in the range of ₹50,000 and ₹70,000. In contrast, the better of the private hospitals will offer a starting pay of up to ₹20,000 plus training and some other facilities. But at a number of privately owned establishments, the pay could be as measly as ₹7,000 a month – that is, less than $100.

Salary and perquisites available to nurses in the UK and the US are many times better than in India. Rewards for nurses in Saudi Arabia and Kuwait are even more. As long as the host countries will leave the door open for Indian nurses, the migration will happen. The only way to put a check on migration will be to give nurses better compensation and recognition for their work.