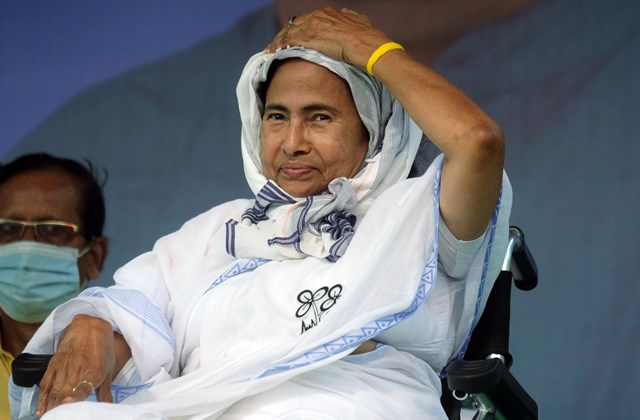 West Bengal Chief Minister Mamata Banerjee on Saturday blamed ‘bohiragoto’ (outsiders) goons for spreading COVID-19 in the state, adding that people from outside will now require an RT-PCR test to enter the state.

Speaking at a public gathering in Galsi, Banerjee said: “The Centre promised to deliver vaccines to all mothers and sisters but it still has not given. There are around 10,000 people, such ‘bohiragoto’ goons from outside the state are residing in the state, a maximum of whom have brought COVID-19 here. They are spreading the virus in Bengal.”

“PM Modi uses people outside the state to stage public meetings. Around 12 to 14 of whom have contracted the virus. We have mandated that people coming from outside the state will have to undergo an RT-PCR test and will be allowed entry after he clears the coronavirus test,” she added.

She further slammed the Election Commission (EC) for not allowing the remaining phases of the West Bengal Assembly elections to be merged into a single phase.

“We asked to merge the election phases. These are our areas. We do not people to face problems. They did not do so. They reduced timings. Why? When elections took place in BJP’s areas, then you (EC) took 8-10 days and now in four phases you have reduced campaigning. You have ruined four days of our campaigning. If you can disrupt four days of campaigning, why can you not club the elections?” she questioned.

The Chief Minister further said that two candidates have already succumbed to the virus and that the EC will be responsible for any major adverse incident while accusing the Commission of trying to stop her.

“You (EC) cut four days of our campaigning because there were no more meetings by PM Modi and Amit Shah. You have done this to stop me. You are doing whatever BJP is asking you to do. You do not have the capacity to think on your own on clubbing phases,” she remarked.

Speaking on her leaked audiotape, Banerjee said BJP has no issue to talk about, so they are resorting to tactics such as recording her conversation with another candidate.

“This means all of your phones are tapped. The Central government even has knowledge of what food is being cooked in your house. It is a big scam and I will call for a CID inquiry. I want to know who tapped my phone. I will not leave this matter,” she promised.

On the day of polling, the BJP and Trinamool Congress sparred over a purported audiotape of a conversation between Chief Minister Mamata Banerjee and TMC candidate Partha Pratim Ray. It was released by BJP.

A BJP delegation met the Chief Electoral Officer (CEO) in Kolkata requesting the Election Commission to constitute a Special Investigation Team (SIT) for probing the purported audiotape of Banerjee, in which she can be heard telling the TMC candidate from the Sitalkuchi constituency to hold protests with bodies of the four killed in Cooch Behar violence.

TMC said it was “illegal and unlawful recording” and blamed the BJP’s “dirty tricks department” for the audiotape.

West Bengal saw 78.36 per cent voter turnout till 6.30 pm in the fifth phase of the assembly election on Saturday. Chief Electoral Officer Ariz Aftab said that the polling “was held peacefully” in 15,789 polling stations spread across 45 assembly constituencies.

The voting for the sixth phase will be held on April 22, wherein 306 candidates will contest for 43 constituencies across four districts. (ANI)