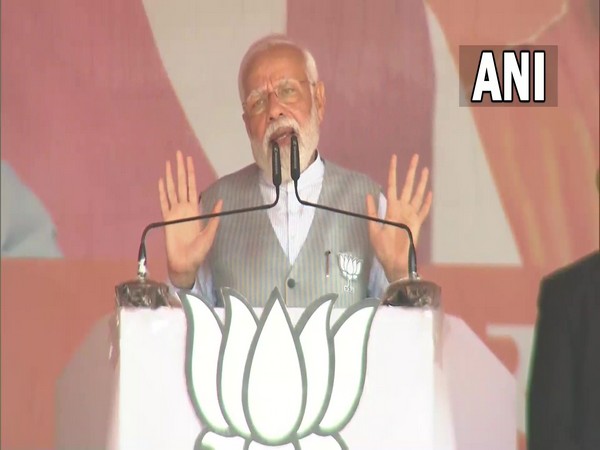 Prime Minister Narendra Modi on Wednesday took a jibe at the Congress over its protest over “price rise” on August 5 in black clothes and said some people “are resorting to black magic as they are immersed in despair and negativity”.

“We saw on August 5 that there was an attempt to propagate black magic. These people think that by wearing black clothes, their period of despair will end. But they do not know that however much black magic they do, resort to superstition, people’s trust on them will never be restored,” the Prime Minister said in his speech through video conferencing at the inauguration of the second generation (2G) Ethanol Plant in Panipat.
Prime Minister Narendra Modi had laid the foundation of a grand Ram temple at Ayodhya on August 5, 2020.

The Prime Minister said that during the Amrit Mahotsav when the entire country is painted in the colour of the Tricolour, he would like to draw the attention of the country to something that has happened.

He said an attempt has been made to defame this holy occasion, “to humiliate our brave freedom fighters” and it is important to understand the mentality of such people.

The Prime Minister said there are some people in the country who are trapped “in the vortex of negativity, immersed in despair” and even “after lying against the government, the public is not ready to trust such people.”

Union Home Minister Amit Shah had hit out at the Congress over its protests on August 5 on price rise, saying the party chose the day for protest and its leaders wore black clothes because they “want to give a subtle message to further promote their appeasement politics” on day PM Modi laid the “foundation of Ram Janambhoomi”.

“I can’t understand why they protested today. Every day when they protest, they used to wear their usual normal dress but today they wore black clothes. Congress chose this day for protest and wore black clothes because they want to give a subtle message to further promote their appeasement politics because on this day itself PM Modi laid the foundation of Ram Janambhoomi,” Amit Shah had told ANI.

He said that the foundation stone of the grand Ram temple at Ayodhya was laid by Prime Minister Modi after a peaceful solution was found to the issue that had been pending for 550 years.

“There was no riot in the country, no violence, the Prime Minister fulfilled the aspiration and faith of crores of people. Congress held a protest today and especially in black clothes at it wanted to give a subtle message that they oppose the foundation stone of Ram Janambhoomi and want to carry forward their policy of appeasement. This policy of appeasement is neither good for the country nor for Congress. It is due to policy of appeasement that Congress is in the state in which it is today,” Shah said.

Congress MPs led by Sonia Gandhi and Rahul Gandhi held a protest in the Parliament House complex on August 5 wearing black clothes as part of the party’s stir against the government on price rise and unemployment.

Uttar Pradesh Chief Minister Yogi Adityanath had also slammed the Congress over its August 5 protest and alleged that the party chose ‘Ayodhya Diwas’ to sport black outfits to “insult” the Ram Bhakts.

In his speech during the inauguration of the 2G Ethanol Plant, the Prime Minister also spoke against the culture of freebies.

He said if there is selfishness in politics, then anyone can come and announce to give free petrol and diesel and noted that such steps will take away the rights of children, and prevent the country from becoming self-reliant.

Due to such selfish policies, the burden on honest taxpayers of the country will also increase, he said and noted that challenges faced by the country require clear intentions, commitment, extreme hard work, policy and huge investments.

“Anyone can come and announce to give free petrol and diesel if their politics is self-centred. Such steps will take away rights from our children and prevent the country from becoming self-reliant. It will increase the burden on the taxpayers of the country,” he said.

PM Modi said that people who have a tendency to avoid problems by adopting shortcuts for political selfishness can never solve the problems permanently.

“Those adopting short-cuts may get applause for some time, and may gain political advantage, but that does not solve the problem. Adopting a shortcut will definitely result in a short-circuit. Instead of following shortcuts, our government is engaged in permanent solutions to the problems. A lot has been said about the problems of stubble over the years. But those with a short-cut mentality could not solve it,” he said.

The Prime Minister listed steps that aim to solve the problem of stubble (parali) in a comprehensive manner. Farmers Producer Organisations (FPO) were given financial support for ‘parali’ and up to 80 per cent subsidy on modern machinery for crop residue.

He said this modern plant will help in providing a permanent solution to this problem.

“Farmers who were given a bad name due to compulsions of parali burning will now feel the pride of contributing to production of bio-fuel and nation building”. The Prime Minister also mentioned Gobardhan Yojana as an alternative means of income for farmers.

The Prime Minister said that those making populist declarations for their self-interest will not invest in new technology. “They will make false promises to farmers but will not set up plants such as for ethanol,” he said.

The 2G Ethanol Plant has been built at an estimated cost of over Rs 900 crore by Indian Oil Corporation Ltd. (IOCL) and is located close to the Panipat Refinery.

Based on state-of-the-art indigenous technology, the project will turn a new chapter in India’s waste-to-wealth endeavours by utilising about 2 lakh tonne of rice straw (parali) annually to generate around three crore litres of ethanol annually. (ANI)