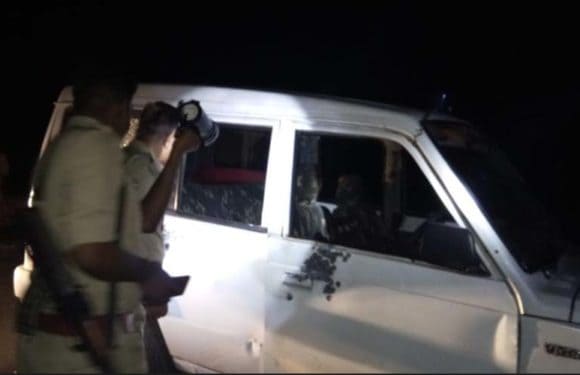 Cop On Encounter: ‘There’s No Time… You Kill Or Get Killed’

A UP Police officer, who chased and gunned down a group of notorious gangsters in western UP, later faced accusations of a fake encounter. Truth prevailed, he told LokMarg, as the enquiry cleared him all charges. The officer recounts the hazards of carrying out one’s duty in khaki.

That night in October 2009: Far from the bustling city, we were on the trail of a black Mahindra Scorpio, that was speeding on the Noida-Greater Noida expressway. A notorious western UP Gangster was going to Bulandshehr, my informer had tipped me off some time back.

The Black Scorpio in front of us, was his ride for the night. We had waited patiently outside near the Mahamaya flyover in Noida for over 5 hours and followed it for eight kilometers.

Finally, we managed to intercept the vehicle. We came to sudden halt. Before, we could ask them to come out, the men inside the car opened fire at us. We ducked in defense. At the speed of lightening, our fearless driver rammed our car into theirs from the side. He pushed their SUV towards carriageway, leaving no option for them to move.

Four armed assailants stepped out of the car and swiftly ran towards the fields near the expressway, while shooting at us. We had expected lesser people and country-made guns. But the manner in which they kept spraying bullets at us, we realized their weapons were rather sophisticated.

We were forced to fire in retaliation and ran after them towards the fields. I felt numb. All I could hear was the loud thumping of my heart. They might easily hide in the dense forest, we feared. This was the best opportunity for us to catch them and the darkness and the wilderness weren’t of much help.

After running for a while, I found myself staring at a seven-foot deep pit. One of the many pits that you come across at the Yamuna ravines. And right across the pit were two of the armed gangsters.

I had to act fast. Before they could fire, I shot at them, killing both of them. Another man, popped out from his hideout and started running. He too was gunned down by one of our men. The fourth man managed to escape.

We recovered sophisticated weapons from them which they had bought for carrying out kidnapping and dacoity like cases. The media was quick to reach the spot and started their live coverage. The next 24 hours, went by like a dream. My team and I were projected as national heroes. But soon, a media trial started, stripping us of all the glory.

‘Why didn’t Noida’s Dabangg police officer shoot them on their legs?’ a news anchor shouted at his top of voice. I wish I had! Back home, in the comfort of my living room, I replayed the incident over and over again in my head. Was it possible to catch them alive? I wondered. Every time the answer I got was a ‘no’.

For us it was either kill or get killed. The topmost officer of the district summoned me the next day and told me there will be an inquiry into the incident. He had asked me to stay prepared for media trial and the court proceedings.

As I was taking my leave from the meeting, he said a few words of encouragement that have kept my spirits high till this date. He said my team and I were very brave, and that the incident will act as a deterrent for highway crimes. An inquiry was conducted in the case.

It kept me on my toes for some time, since I had to travel to Lucknow and Allahabad. Finally, the court decided the case in our favor. I served Noida for another nine months and was transferred to other districts of Uttar Pradesh. Since this incident, there have been 11 more shoot outs, but this particular case is known as my ‘claim to fame’.

(The officer, currently a Deputy SP, requested not to disclose his identity)