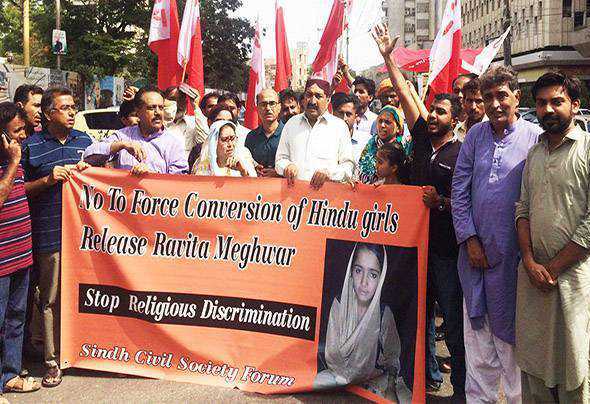 Protests In Pakistan Over Assault On Hindu Women

Minorities in Pakistan protested against an alleged assault on a Hindu woman over a false accusation of theft, local media reported.

A large number of people gathered outside the District police office and Deputy Commissioner’s office in Bahawalpur on Monday to protest against the atrocities against the minorities in Pakistan.

The protestors said that a Hindu woman was falsely accused of theft and was assaulted on the pretext of it. The victim is a resident of the Yazman Mandi area and was working as a housemaid. It was alleged that a group of people attacked her house and assaulted her, local media reported.

She was taken to a local rural health center where the doctor refused to treat her and did not give her a medical certificate, the protestors said.

The rally was addressed by some minority leaders, who demanded a fair investigation into the matter. They demanded action against the accused and the doctor.

The misuse of the draconian blasphemy laws against minorities and even members of the Muslim community to settle personal grudges is rampant in the country.

The minorities are constantly being murdered and subjected to inhuman brutalities in the name of blasphemy, conversion to Islam, and other sectarian differences.

The situation faced by the Hindu women and Christian groups in Pakistan is bad in general, but women from these communities are the worst victims of the discriminatory attitudes of the authorities, political groups, religious parties, the feudal structure, and the Muslim majority.

The dilemma of forced conversions and marriages put minority Hindu women at risk and the issue of securing rights for minority women has become particularly complex in Pakistan. (ANI)