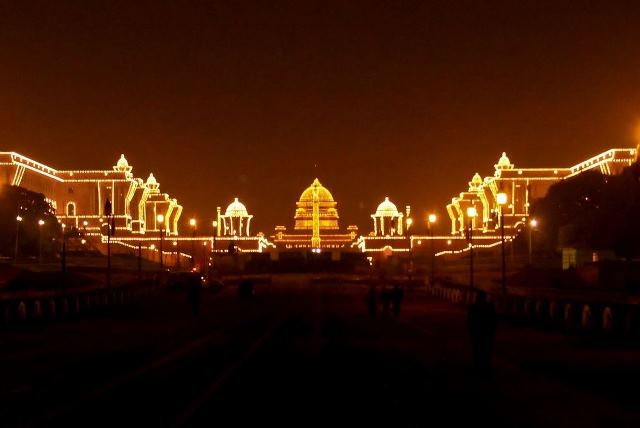 At a distance from India’s current political discord and economic slowdown, but inevitably connected, has begun a spree to demolish what is there and to build afresh — state capitals, cities, conference complex and more.

Take New Delhi. It is barely a century-old, when other world capitals, ancient and modern, stay where they are. Over a dozen old cities that preceded it were invaded, occupied, abandoned and re-occupied over two millennia. Now, the first case of massive refurbishing is about to begin.

The Parliament’s present complex will become a museum. Radical changes await the vast boulevard that stretches from Rashtrapati Bhavan, the presidential palace on the Raisina Hill to India Gate. Built post-Independence, Dozens of government office buildings built around it post-independence, will be demolished and re-built into modern, supposedly environment-friendly glass-and-concrete structures. On Friday, March 20, the Centre approved the land use change for execution of the Central Vista redevelopment project with the issuance of a notification to Urban Affairs ministry. The face of the Government of India built during the British era by Sir Edwin Lutyen is set to change.

There is tearing hurry, it would seem. A new triangular Parliament will be ready by 2022. Only, estimates of the entire exercise are not worked out. The security angle is high, with plans to re-locate the Prime Minister’s residence close by and a tunnel to connect it with the office.

It is nobody’s case that new constructions should not come up or old ones should be repaired. But no priority, no rationale is put forward. The total cost is going to be staggering.

Save Le Corbusier-deigned Chandigarh, a resource-starved India did not build a major city for a half-a-century. After years of discord, Haryana and Punjab settled for Chandigarh that also houses its own administration.

Perspectives have changed with the century. Chhattisgarh built Naya Raipur without much acrimony. But Uttarakhand, created on the same day doesn’t have a capital after 19 years. Gairsain, centrally located – near the tri-junction of Almora, Garhwal and Chamoli districts, was to be the state capital. But Dehradun located in the state’s extreme corner remains the ‘temporary’ capital.

Five successive governments have failed to take decisions. The state that was created essentially to undo severe neglect of the Himalayan hills when under Uttar Pradesh still has its capital in the plains.  Once-pristine ‘Dehra’ is getting congested, but its political pull is too strong for any government to consider a shift.  Just symbolically, one legislative assembly session is held at Gairsain.

If New Delhi is planning its splurging, the state satraps are having their own. In Hyderabad, which is five year-old Telangana’s capital, Chief Minister K. Chandrshekhar Rao, has built a sprawling hundred million rupees mansion that can beat the palace(s) of the erstwhile Nizam, the princely house that was one of the world’s richest in the last century.

In 2014, when Telangana was carved out of Andhra Pradesh, it was decided that Hyderabad would remain the joint capital of the two states for a maximum of 10 years. But Rao pushed Chief Minister N. Chandrababu Naidu to build a city for himself. Naidu, who created Cyberabad, India’s first Information Technology hub, took the challenge.  From here starts the southern splurging saga that has gone haywire.

Naidu nursed Amravati, locating it on the banks of Krishna, harking back to “the glorious capital of the Satavahanas,” the ancient kingdom that ruled the Deccan region for five centuries.

He needed 33,000 acres of land. To encourage farmers to give up their land voluntarily for the project, his government launched a land pooling scheme. Publicized as farmer-friendly, the scheme was, however, seen as the state government’s way of circumventing the Right to Fair Compensation and Transparency in Land Acquisition, Rehabilitation and Resettlement Act, 2013.

Naidu also managed funds from abroad and brought a Singapore consortium on board. His ties with the Narendra Moi-led government were never close enough to get central funds. That Modi’s party aspired to make political gains at Naidu’s expense was also a factor.  And then, Naidu lost the elections last year to his rival, neither to the Congress nor the BJP, but to debutante Jagan Mohan Reddy.

By that time, work at Amravati, touted as a world capital, was 60 percent complete. It has involved Rs.10,000 crores investments from various agencies including central government assistance of over Rs.2500 crores.

Prior to the political change of guard, Amaravati was bustling with construction activity and tenders for projects worth Rs. 43,000 crores were already issued. The World Bank had agreed to finance the Singapore consortium. Now, investors have vanished.

A green-field city with its revenue generating urban centric developmental model with an estimated three million population in next ten years is now being demolished even before it is born. The futuristic vision of Naidu, which he hard-sold to the people, especially the farmers who surrendered land, now lies shattered.

Jagan Mohan Reddy’s government is alleging wrongdoing and wants the city project, now at standstill, completely scrapped. There is none to ask what is to be done about the huge effort at constructing the city and the money that has gone into it.

Allegations fly around in any such project — they did even when Chandigarh was built. Jagan and his party leaders are being accused of inside trading of lands around Visakhapatnam, just as Naidu group was accused of doing around Amravati.

Cash-strapped Jagan — the state has been revenue-deficit since 2014 and has run a debt of over 2.5 lakh crores — is lobbying with Modi for “special status” for the state, which means more funds. The unstated offer is willingness to join, or stay close to, the ruling alliance. Letting the kilkenny cats fight, the Centre last week refused to intervene.

That, again, is not all. Reddy has got two bills passed envisaging three capitals in the Legislative Assembly where his party enjoys a brute majority. But the Legislative Council where Naidu’s party has the majority has stalled the bills, sending them for further deliberation to the Select Committee. Now, Reddy wants to dissolve the upper house itself to push his three-capital project!

The two regional satraps, instead of making a collective effort to salvage Amravati, are running highly personalized and caste-based political campaigns, damaging social harmony and the economic progress.