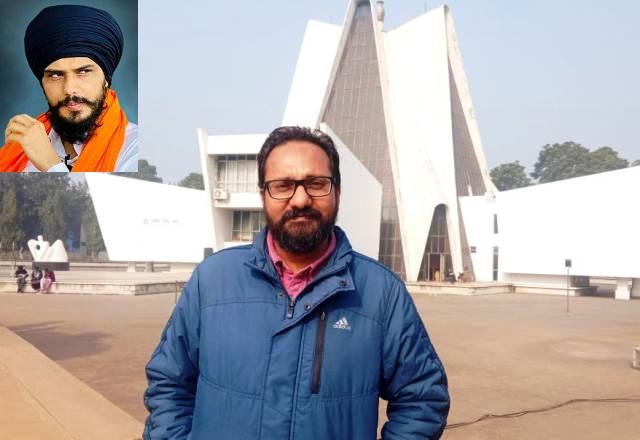 Punjab has been in a cyclical crisis, perpetually. Over an interval of roughly 20 years, the state faces some or the other issue that boils over to push it into a grave situation. From Partition in the late 1940s to Naxalism in the 60s, then from militancy to the drug menace and now the current economic mess, the state has hurtled from one disruption phase to another.

The rise of Bhai Amritpal Singh as a cult figure is a manifestation of the crisis that Punjab faces today. It is essentially a politico-economic crisis which is being voiced by many groups, organisations and movements simultaneously, especially on the federal front and its relations with the Centre. Farmers, labour and sectarian groups articulate this crisis and address their respective constituencies. Amritpal is one of them.

Punjab is battling multiple challenges related to unemployment, water scarcity, farmers’ income and immigration. The state and central leaderships have failed to provide any solution and this has created a vacuum where the youth is searching for an alternative route. Now, Amritpal emerges on the scene. He slams the failure of progressive forces in Punjab, and offers a one-size-fits-all solution. He is angry and appealing to many.

While Amritpal Singh does not articulate the voice of the entire Punjab, it will also be foolish to assume that no one is responding to his narrative. His is a voice that needs to be heard and resolved, just like the voice of farmers, teachers and labours who continue to question the accountability of the government.

Amritpal Singh has many admirers among the youth and the NRIs and a sizeable following on social media. However, to my mind, he neither represents the Sikhi nor the concerns of his proclaimed supporters. His narrative only talks of suppression, federalism and renaissance etc, but he leaves little scope for a dialogue. Dialogue brings responsibility and that is missing from the Amritpal narrative. Besides, he makes veiled threat to take up violence. This is a matter of concern.

The other issue is how Amritpal is expressing his ideas. He is not questioning the state. He talks of the management of Gurdwaras, the proliferation of other religions etc. This creates social tension, especially within the marginalised sections of Punjabi society like Dalits. He is possibly antagonising these sections.

So in terms of manifestation, form and articulation, the Amritpal phenomenon is essentially problematic. How will this phenomenon unfold in the context of the immediate politics is yet to be judged. The newly formed AAP government does not seem to be addressing the problems, so the crisis may deepen with time.

Parallels may be drawn with the crisis of the 1980s when the Khalistani identity had emerged in the face of an authoritarian regime at the Centre. Punjab has witnessed violence in the past and drawn its lessons. But if the state too repeats its mistake and resorts to more repression or any external factor comes into play, the state may face turbulence again. Yet, I do not think we will repeat the 1980s situation.

But the divisions are likely to grow. Separate, new constituencies may emerge. I see an increase in the acceptance of Amritpal phenomenon too. But within Panthic politics, there have been differences. It will largely depend on the calibre and cult of their leaders. Is Amritpal capable of overshadowing all other forces as one individual did in the 1980s? I am not sure of this.