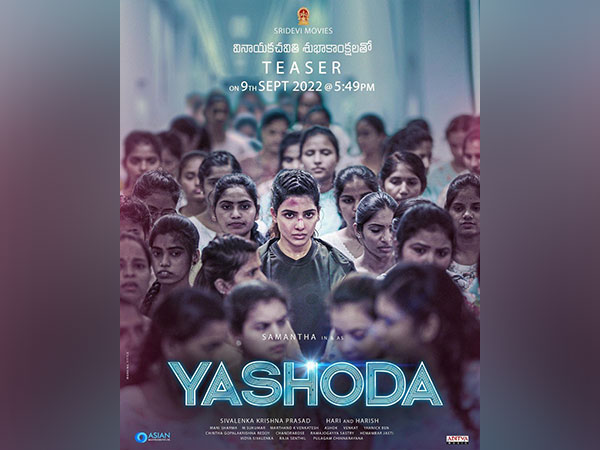 Taking to Instagram, the ‘Family Man Season 2’ actor shared the poster which she captioned, “The indomitable will!! #YashodaTeaser on Sep 9th @ 5:49PM”
https://www.instagram.com/p/Ch6bt4hL1HL/

In the poster, Samantha could be seen standing in between a group of women with injury marks on her face.

With the new poster, she also announced the release date of the teaser of the film, September 9, 2022.

Helmed by the director duo Hari and Harish, ‘Yashoda’ is a science fiction thriller film which was earlier slated to release on August 12, 2022, but the makers opted to postpone their film.

The new release date of the film is still awaited.

Soon after she shared the poster, fans swamped the comment section and dropped heart and fire emoticons.

“Shining out in the crowd and how,” a fan commented.

Another fan wrote, “I’ve heard about seven wonders of the world and the 8th just showed up!!.”

Meanwhile, Samantha made her ‘Koffee with Karan’ debut alongside Akshay Kumar. She is now all set to make her Bollywood debut. She has reportedly signed her debut film alongside Ayushmann Khurrana. If reports are to be believed, Samantha has joined Varun Dhawan in a remake of Russo Brothers’ Citadel, which is helmed by Raj Nidimoru and Krishna DK.

Apart from that, she will also be seen in a mythological drama film ‘Shakuntalam’ and in a romantic comedy film ‘Kushi’ alongside Vijay Deverakonda, which is all set to hit the theatres on December 23, 2022. (ANI)