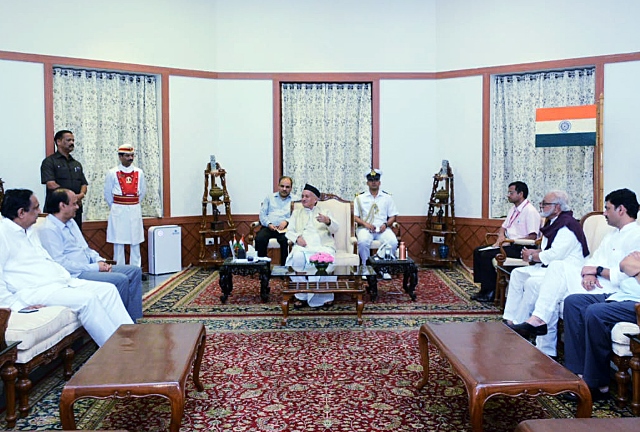 The political uncertainty continued in Maharashtra after a day of hectic political developments on Monday though there was some movement towards forming a non-BJP government in the state with the Shiv Sena talking to NCP, and the Congress holding a meeting of its working committee in the national capital.

At the end of the day, Shiv Sena, which is keen to have its chief minister in the state, did not get additional time from Maharashtra Governor Bhagat Singh Koshyari to submit letters of support from the NCP and the Congress.

The Governor, instead, called the NCP, which finished third in the assembly polls, and asked it to indicate its willingness to form the government in the state.

In another development, Arvind Sawant, the lone representative of Shiv Sena in the BJP-led government at the Centre, resigned from his post as part of his party’s efforts to get the backing of NCP.

The political chess-game in the state started after BJP, which emerged as the single-largest party in the results declared on October 24 by getting 105 seats, declined to form the government following its differences with its ally Shiv Sena over power-sharing.

The Shiv Sena insisted on getting the post of chief minister for two-and-a-half years but the BJP said there had not been any such understanding between the two parties ahead of the polls. Shiv Sena emerged as the second-largest party in the polls and got 56 seats.

Both the NCP and the Congress held meetings in the morning over the developments as the Shiv Sena expressed its desire to form a non-BJP government. The NCP made it clear that it will not make a decision without its ally Congress spelling out its stance. The NCP has 54 MLAs in the assembly while the Congress has 44.

Sources said that there was a meeting between Shiv Sena leader Uddhav Thackeray and NCP chief Sharad Pawar.

The Congress Working Committee discussed the developments in Maharashtra and decided to have a meeting with its leaders from Maharashtra before taking a decision.

However, at the end of deliberations, the party issued a statement which talked of further consultations with the NCP and made no mention of the Shiv Sena.

“The Congress Working Committee met this morning and had a detailed discussion on the situation in Maharashtra after which consultation was held with Maharashtra Congress leaders. The Congress president has spoken to Sharad Pawarji. The party will have further discussion with NCP,” said the statement issued by party general secretary KC Venugopal.

Extending support to the Shiv Sena is not an easy proposition for the Congress, not only because the two parties have been adversaries in Maharashtra but also because of its implications on the electoral prospects of Congress in other states.

However, a section of the newly-elected MLAs is in favour of joining hands with the NCP and the Shiv Sena to form a non-BJP government.

Koshyari on Monday asked NCP leaders including Ajit Pawar to indicate willingness and ability of his party to form the government in Maharashtra. He had on Sunday asked Shiv Sena legislative party leader Eknath Shinde about the government formation in the state.

NCP leader Jayant Patil told reporters after meeting with the Governor that as per the procedure, the party had been given the letter. “We suggested to him that we will have to talk to our allies and we will get back to him as early as possible. The deadline is 8.30 pm tomorrow,” he said.

Patil said the party will hold consultations with the Congress and convey its views to the Governor.

NCP leader Nawab Malik had said earlier that non-BJP government cannot be formed in the state without NCP, Congress and Shiv Sena.