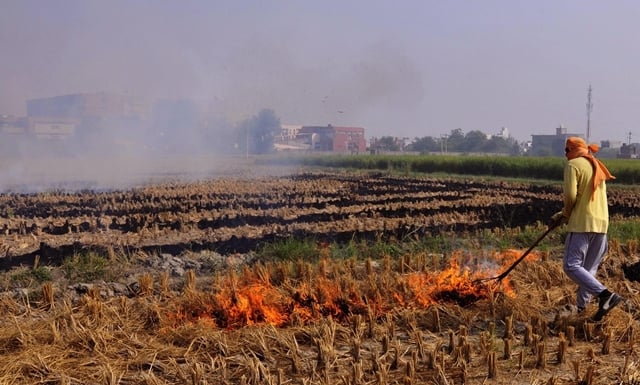 'Stubble Burning Down This Year'

The government on Friday said that smoke from the burning of paddy crops by farmers in Punjab, Haryana and Uttar Pradesh contributes to environmental pollution during the winter season, however, there has been a reduction in the incidents of paddy residue burning.

In his written reply to a question in the Parliament that whether crop residue burning is a great cause of pollution, skin disease, Union Minister of Agriculture and Farmers Welfare Narendra Singh Tomar stated, “Among other factors, smoke from the burning of paddy crop residue by the farmers in Punjab, Haryana and Uttar Pradesh contributes to environmental pollution during the winter season which increases the risk of human health hazards including skin problems.”

“However, as per satellite data, overall about 15 per cent and 41 per cent reduction in the number of paddy residue burning events were observed in the year 2018 as compared to that in 2017 and 2016, respectively in these three States,” he added.

To the question that the machinery available for management of crops residue is very expensive even after the subsidy given thereon, Tomar stated, “No sir. After the applicable subsidy (50 per cent for individuals and 80 per cent for groups), the cost of machinery works out to be reasonable. This machinery can also be availed on rent through Custom Hiring Centres.”

Lastly, Tomar stated “Does not arise” to the question that whether Government would consider buying machines and giving them on rent to farmers to eliminate residue burning activities? (ANI)