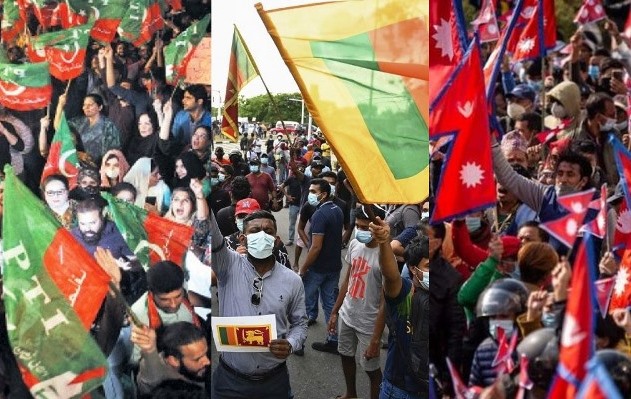 The recent regional economic and political crises in south Asia, most of them in immediate neighbours of India, have raised concern amongst the Indian establishment. The economic turbulence in Sri Lanka, Nepal and Maldives and the political turmoil in Pakistan may affect India manifold.

The economic impact of the various crises is expected to begin manifesting themselves soon, if governments of those countries fail to address the crises quickly.

To accord priority to India’s neighbours in their international activities, programmes and projects, was stressed at the first ever Inter-Ministerial Coordination Group (IMCG) meeting organised on April 12 in New Delhi.

The economic turmoil in Sri Lanka is currently viewed as the most pressing foreign challenge by the MEA with diplomatic and trade ramifications.

Over the years the Sri Lankan economy has failed to attract much foreign direct investment or spread its export basket, though it has transitioned into an upper-middle income country.

For most part, Sri Lankan growth was sustained through international sovereign bonds and expensive short-term external borrowing. These funds were channelled into education, infrastructure, and healthcare, besides maintaining financial liquidity and promoting better macroeconomic policy.

However, by April 2021, Sri Lanka’s external debt had touched $35 billion. In March, inflation zoomed to 17.5%, the highest since 2015, and forex reserves dwindled to $1.9 billion, enough only for a month’s imports.

Its debt-to-GDP ratio stands at an alarming 120%. Not surprisingly, on April 12, the government defaulted on all its outstanding foreign dues. The country has to repay $4 billion in debt this year.

Deep political and economic mayhem has followed, as there is no money to pay for food and fuel imports. Protests have broken out countrywide.

While India is under pressure to continue supporting the island country through a series of lines of credit, political dialogue with the administration of Sri Lankan Prime Minister Mahinda Rajapaksa has not yielded results. While protests rock Sri Lanka demanding Rajapaksa’s resignation, he has resisted both political as well as economic change by spurring plans of urgent economic reforms.

By depositing their savings in Nepal, overseas Nepalese would continue to “maintain their link as well as benefit from 6 to 7 per cent interest” offered by Nepali banks, Sharma said.

Though Sharma maintained that the Nepalese economy did not face a crisis and Nepal’s situation could not be compared with Sri Lanka, the fact is that the Himalayan kingdom is facing its worst economic crisis in decades and increasing anti-government protests.

In Nepal, remittances by overseas workers, which constitute nearly a quarter of the economy are crucial for external payments, they fell 3 per cent to US$5.3 billion between mid-July to mid-March, compared with a 5 per cent increase in the same period a year earlier.

The political turmoil in Pakistan has caused a stir in India’s MEA, yet many believe that it may prove to be a positive development. The country’s new prime minister, like his elder brother and former prime minister, is essentially a businessman and he may try to salvage the ties between the two countries by boosting trade amongst them, as his brother tried in the past. Reports speak of a large section of the traders favouring reopening bilateral trade ties with India.

Pakistani importers, especially of cotton, textiles, pharmaceuticals and chemicals and exporters of dry fruits and handicrafts are keen on the border being open once more, officials said. They added that the government expects the thaw in bilateral relations to begin from this if they happen at all.

Is China To Be Blamed?

Currently many theorists have blamed Sri Lanka’s economic relations with China as the main driver behind the crisis. This has been called “debt-trap diplomacy” by the Untied States.

However, in reality loans from China accounted for only about 10 per cent of Sri Lanka’s total foreign debt in 2020. In addition defaults over China’s infrastructure-related loans to Sri Lanka, especially the financing of the Hambantota port, are being cited as factors contributing to the crisis.

But the facts don’t add up. The Chinese Exim Bank financed the construction of the Hambantota port. As it was running in losses, the Sri Lankan government leased out the port for 99 years to the Chinese Merchant’s Group, which paid Sri Lanka US$1.12 billion. So in reality it actually bolstered Sri Lanka’s foreign exchange reserves by US$1.12 billion.

The situation turned bad due to two economic shocks in 2019. First, there was a series of bomb blasts in churches and luxury hotels in Colombo in April 2019. These led to a steep decline in tourist arrivals, a major source of foreign exchange earning for the country.

Second, the new Gotabaya government carried out irrational tax reforms. About 2 per cent of the gross domestic product was lost in revenues because of these tax cuts.

Though the situation in every country may seem different, yet they may have a cumulative bearing on India in the near future. It might be looked up to, to act as a big brother by Sri Lanka and Nepal. As regards to Pakistan it may prove to be a case for caution both militarily and politically, but indeed the times ahead seem to be challenging for the Indian foreign policy deliverers.

Though the Indian economy overall seems resilient to the external forces, yet a word of caution to some Indian states. Some of these states may have the makings of a crisis, due to their populist policies. A recent report states that most of the non-BJP ruled states, such as Punjab, Andhra Pradesh and West Bengal may end up wrecking their economies, which are under strain due to the populist policies being implemented there.

So, in the near future Indian government may have to deal with both external and internal financial woes.