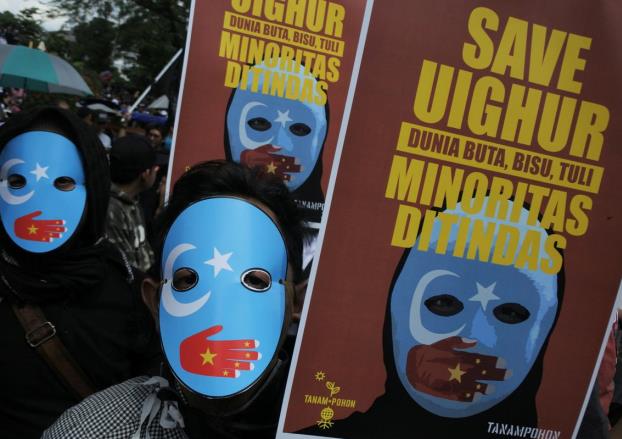 Systematic Genocide Of Uighurs In Progress

Last month in early July, the BBC reported that the Americans, in a significant move, have “seized a shipment of human hair products from China” that it says was made by forced labour from children or prisoners. “Production of these goods constitutes a very serious human rights violation,” said US customs official Brenda Smith. China, as it routinely does and rather nonchalantly, with a straight face, vigorously denied the charges. The ‘forced labour’ charge was malicious and totally fabricated, it claimed.

The American authorities did not clarify if the hair products, or products made from hair, literally, came from children or women, or prisoners, especially those imprisoned in the huge province of Xinjiang in China. Indeed, did they come from this far-west province, now dubbed as a vast concentration camp, perhaps bigger in size than what the Nazis ever imagined before the Second World War and during the Holocaust, where more than one million local Muslim Uighurs are reportedly trapped as prisoners and bonded labourers, including children and women.

According to the report, the products were detained by the US Customs and Border Protection at the Port of New York and New Jersey. The products were part of a 13-tonne shipment of hair products worth more than $800,000. “The goods came from a company in Xinjiang, which, the agency said, indicated potential human right abuses of forced child labour and imprisonment.”

If anything, the seizure was scary and reminded the world of yet another grotesque and heart-rending chapter of history: the manner in which the Nazis used the body parts of Jewish prisoners in the death and labour camps, especially that of women and children, including their skin, hair, etc, to make products. Their teeth, especially those with gold embedded in it, were melted to extract gold.

So what is happening in Xinjiang, and with its indigenous population, even as China enforces a total information blockade in the region with reporters not allowed to venture in, and vast prisons and ‘concentration camps’ the size of several football fields being used for ideological indoctrination, mass brutalization, sexual slavery, bonded labour and total subjugation with a military clampdown? Are Uighurs the victims of mass incarceration with total denial of fundamental rights which the world is refusing to see despite the stark evidence pointing to it again and again?

Recently, a video had surfaced which looked like a bigger and more draconian version of what used to be the Guantanamo Bay during the times of George Bush in the US after the September 11 attacks in America by the Al Qaeda. Rows of uniformed prisoners sitting with their heads bowed, their heads shaved, being herded by armed military men.

The picture taken by drones was shown in almost all top television channels in the West and in some cases the Chinese ambassadors and other officials were asked to respond. In most cases, the Chinese had no answer at all, not even a clear denial, saying, really, what’s new about these video pictures, they could be just routine movement of prisoners in routine prisons, what’s so surprising about it?

However, the drone videos clearly pointed out that the location was Xinjiang and the people were Uighurs. Indeed, in a dark Orwellian twist, these prisons and concentration camps are called ‘re-education camps’, even ‘loving, kindness camps’ or even vocational training camps where all are happy and healthy. Typically, it is reported that the prisoners are forced to sing and shout aloud in chorus praising Xi Jin Ping, the Chinese president for life.

Xinjiang was incorporated in China in 1949. Unlike the occupation of Tibet, the diabolical paradigm shift in the demographics of population and social and economic life came much later. Tibet has over the years seen the influx of Han Chinese population from the mainland, shifting the local population in this vast, scattered and beautiful mountain landscape to an inferior position, with most top positions held by the Han Chinese appointed by the Chinese Communist Party and the regime in Beijing, and with local Tibetans having been totally compromised and coopted.

This reporter has witnessed several ‘exemplary villages’ in Tibet, as he covered the region before the Summer Olympics in China in 2008. Every house in the village celebrated ‘happy’ Tibetan families and farmers, with a calendar showcasing the smiling leaders of the Chinese government: Deng Xiao Ping, Hu Jintao etc. All of them unanimously praised the Chinese government in the various Tibetan-Buddhist monasteries controlled by Beijing and the Prefecture of Tibet, as well in these exemplary villages which showed no signs of poverty with beautiful rivers and water bodies, flourishing agricultural fields, sturdy houses, and with private property, including land, now allowed.

The only irony was the hidden joke: that under some of these government calendars with smiling faces of top Chinese leaders of the past and present, there might occasionally lurk another small calendar: that of a smiling Dalai Lama.

However, Tibet, where, even before the Olympics, scores of monks did ‘self-immolation’ in protest, and where several other protesting monks – branded criminals – literally disappeared, has not gone through the same kind of mass persecution which the Uighurs are going through right now in Xinjiang. Tibet did not have concentration camps, though State repression was universal and there were no freedoms. Perhaps this is because Tibet has always been under the international scanner with celebrities, world leaders and human rights groups openly backing the Dalai Lama.

ALSO READ: Why Is Europe Quiet On Baloch Journalist’s Death?

However, the huge administrative province of Xinjiang, with its Islamic, Turkic and Central Asian roots, and bordering, among others, Mongolia, Kazakhstan, Kyrgyzstan, Tajikistan and Pakistan, has chosen to violently rebel many times in the region and even in Beijing. There have been clashes with the Han Chinese, the police and military, and a car exploded at Tiananmen Square in Beijing too in the past. China clamped down with an iron hand branding them terrorists.

The locals speak a variant of Turkish and are believers in strong Islamic traditions. Ethnically and culturally they believe they have inherited their history from Central Asia. Kashgar here was a famous town during the Silk Road era, with local craft and agriculture their mainstay at one time. Now, everything is controlled by the Han Chinese and the Chinese military administration.

As of now, almost 40 per cent of the population is Han Chinese. Mass surveillance including facial records of individuals is now an accepted reality. Islamic traditions have been banned and instead indoctrination based on so-called ‘Chinese Communist Characteristics’ are drilled inside children and adults. Most ‘brainwashed’ children are separated from their family and friends who do not know their whereabouts. Recently, some local students returned from Hong Kong to find that their parents, family and friends have disappeared. In secret files discovered and exposed by The New York Times, several such cases were reported.

The students were told, as the leaked internal Chinese government documents of 400 pages plus revealed, that if they choose not to follow the dominant code, even in answering the questions put up to them, the detention period of their loved ones can be prolonged or shortened accordingly. They were told that their family is in a ‘training school’ set up by the government and that they were not criminals, but they will not be allowed to leave these training schools. Occasionally, some of the disappeared people appear on state television, looking emaciated and tortured, praising their life and the contribution of the Chinese government. This especially happens if their relatives and friends choose to campaign for them ‘outside China’ especially in the West.

There have been other horror stories, one most horrifying being that local women, whose husbands are in prison, or have disappeared, are being forced to sleep in the same bedroom with unknown Han Chinese men – so as reportedly ‘to acclimatize and protect them with mainstream Chinese culture and family values’. Not only that, in yet another move reminiscent of the Nazi era, birth control measures are being pushed forcibly down the throat of Uighur women. Soon, observers believe, that they might be forced into marriage with Han Chinese men, or compelled into some form of sex slavery or trafficking.

Wrote the Newrepublic.com in a recent article: “The horrors Beijing has rolled out in Xinjiang are almost too nauseating to name. Buoyed by a series of thousands of so-called ‘re-education camps’, Chinese Communist Party (CCP) authorities have effectively transformed the entire region into what The New York Times describes as a ‘virtual prison’ with everything from race-based facial recognition tools to the  tracking of DNA samples and iris scans stalking Uighurs wherever they go. To take just one measure of comparison, Xinjiang now has a higher level of police density than even East Germany— which itself had magnitudes more police informants per capita than even Nazi Germany — at the end of the Cold War. “Nowhere in the world, not even in North Korea, is the population monitored as strictly as it is in Xinjiang,” wrote the German magazine, Der Spiegel. ”

“China’s camps have yet to become reprises of Dachau or Sachsenhausen, and the region has not fully collapsed into outright genocide. But that’s not for lack of trying. While Chinese authorities continue to strip-mine the region of any of its pre-CCP past—of mosques, of Islamic graveyards, of cultural trappings and non-Han ethnic identity—the CCP has launched a simultaneous campaign of eugenics against the Uighur population.” By forcing sterilization and abortions alike on hundreds of thousands of Uighur women, China hopes to kill off the next generation of Uighurs before they’re even born.