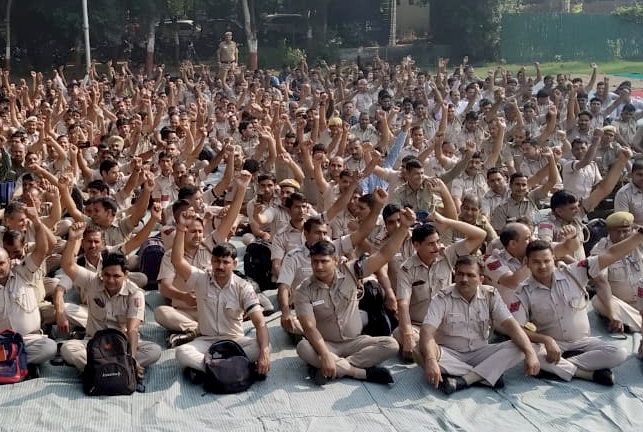 Delhi Police Commissioner Amulya Patnaik on Tuesday appealed the cops who were staging a protest here over the Tis Hazari clash, to resume their duties.

“We have stood patiently against some incidents which happened recently but we maintained law and order. This shows our professionalism and strength. We understand your problem and trying to take up with seniors. We have to work within the boundaries of the law. We have to maintain the dignity of the Delhi Police. A case has been registered in the incident at Saket Court,” he said in an audio message to police personnel.

“On orders of the Delhi High Court, an investigation is underway. We appeal that you should resume your duties. Your protest was peaceful. We are with you on this issue. We will take every step for your welfare,” Patnaik added.

Delhi Police has announced compensation of at least Rs 25,000 to police personnel sustained injuries during a clash with lawyers at Tis Hazari court.

“All the policemen who were injured in Tis Hazari clash will be given a compensation of at least Rs 25,000 by Delhi Police… I request all of you to please return to your duty points,” Special Commissioner of Police Delhi, Satish Golcha said while addressing cops at Police Head Quarters (PHQ) where they were protesting over the incident since morning.

A clash had broken out between lawyers and cops over an alleged parking issue at the Tis Hazari court on November 2, in which several police officials and lawyers were injured.

One of the protesters read out the list of demands. They demanded that suspension and transfer of police personnel allegedly involved in the incident should be cancelled.

Protesters also sought an FIR against lawyers allegedly involved in the incident, while adding that no be taken against them for protesting. They also demanded a Police Welfare Union.

Earlier in the days, family members of Delhi Police personnel also staged protest against the clash at India Gate today.