The political pendulum has now swung from one extreme to the other, from ‘appeasement’ to ‘appropriation’ of the community

It is not unusual, given the great churning India is going through, to welcome legislation, soon to be law, with a few caveats and some apprehensions.

With Rajya Sabha doing so last week, both Houses of Parliament have passed the Muslim Women (Protection of Rights on Marriage) Bill, 2019,  that makes talaq-e-biddat a criminal offence. It provides for three years’ imprisonment to a Muslim husband who divorces his wife by pronouncing the word ‘talaq’ thrice, irrevocably, in one sitting.

ALSO READ: The Law Will Get Me The Respect I Deserve

After a prolonged, yet inconclusive, debate in parliament, by top judiciary and the academia, if one excludes sections of the Muslim clergy, the conservatives and sections of the political class (for reasons both legal and political), the move has received widespread approval.

With that India, having the world’s third largest Muslim population, is on par with several Islamic countries, including Sudan, Egypt, Iran, Jordan, Morocco, Tunisia, Algeria, Yemen and Iraq. Of those with similar social norms to India, Pakistan and Bangladesh had outlawed it in 1961. It remains in vogue in Sri Lanka.

Indian Muslims are governed by the Muslim Personal Law (Shariat) Application Act of 1937, as interpreted by the All India Muslim Personal Law Board (AIMPLB). This body comprising mainly Sunni ulema, has rigidly stuck to its turf and opposes any ‘interference’ in the ‘divine’ law.

But others like Professor Tahir Mahmood, an internationally recognized expert on sharia law, support a ban on triple talaq. Mahmood recently told Scroll, an Indian news website: “Ignorance, obstinacy, blind belief in religion and morbid religiosity are undoubtedly the factors responsible for triple talaq being allowed in India.”

Lawyer-politician Arif Mohammed Khan, who played a key role in drafting the legislation, says despite prohibition, this practice is rampant in Pakistan and many with overwhelming influence of the clergy that propagate it as the “word of God” among illiterate masses.

To end the practice effectively, he justifies a law that deters. However, debate persists on this point. Criticism centres heavily on criminalizing of a marriage that is essentially a civil act. The opposition was outvoted on this in parliament.

Then, there are practical issues: How does one adjudicate in a his-word-against-hers exchange between husband and wife? Who will look after the wife, abandoned and in all probability ostracized by the husband’s family through this illegal act? More importantly, the children, once the erring husband goes to jail? The problem is acute if the wife has no independent income and worse if she is not accepted in her parental home.

Despite this law as a deterrent, the practice is unlikely to end soon. Law Minister Ravi Shankar Prasad who piloted the bill, said some 300 marriages dissolved under the spell of instant talaq while the debate was on. In 2017 alone, 574 instant divorces had occurred, just before the Supreme Court declared it illegal.

Seeking to implement this verdict, the government amended some provisions of its original legislation, making the offence cognizable only if the affected wife, or one related to her by blood or marriage, files a police complaint. A man arrested under this law may get bail, after the Magistrate grants a hearing to the wife. Thirdly, the offence is compoundable, that is, the parties may arrive at a compromise.

Questions persist. Why this new law when wife and children’s abandonment, failure to provide for them and dowry harassment can be tackled under the existing law? Once the apex court has declared instant talaq illegal, what is the need for criminalizing it?  The bill doesn’t convincingly answer these and many other questions.

The government has chosen to give teeth through a three-year jail term, ostensibly in keeping with a general approach that makes many other laws, even traffic violation, stringent with higher punishment.

Moving on to giving credit and the blame, a less-talked aspect of the debate is that the predecessor Congress-led government had studied status of India’s Muslims through a commission headed by late Justice Rajinder Sachar. A committee it formed to assess Muslim women’s status said in 2013 that the triple talaq “makes wives extremely vulnerable and insecure regarding their marital status”.

However, over half-a-century in power, the Congress followed the liberal/secular approach of leniency to ‘protect’ the minorities. In the case of Muslims, it adopted the British colonial practice of tackling the community through its generally orthodox clergy. This got institutionalized as AIMPLB in 1973.

The Bharatiya Janata Party (BJP) and its government accuse the Congress and the Left parties of ‘appeasing’ the Muslims and holding them as “vote bank.” Now it ingeniously takes the credit for this Muslim-specific law enacted in the name of “gender justice”. The political pendulum has now swung from one extreme to the other, from ‘appeasement’ to ‘appropriation’ of the community.

This fits in with the BJP’s majoritarian agenda and its two-pronged strategy of neutralizing the community’s vote while seeking support from among its women.

There is another less-talked aspect that needs attention. Given the rising education levels among Muslim women, especially in the cities, it is conceivable that they would vote for Prime Minister Modi for this act. Statistics of the last two decades show that more Muslim girls are entering schools and colleges and into the work force when compared to boys who are either not inclined to study or are required to turn family’s bread-earners early in life.

The community leaders are subdued. The AIMPLB has not reacted. Save some Muslim lawmakers, there is no significant opposition. Including a Congress in disarray, the Opposition was out-maneuvered and outvoted. The government managed the numbers even in the Rajya Sabha where it is in minority, first by engineering defections and then ensuring absenteeism.

India is on the cusp of social and political change. The challenges are all-round and more layered as the changes are being initiated by a Hindu right-wing majority party. Its triumphal mood is palpable.

Doubts and apprehensions arise as it seeks to ‘protect’ women of a community when its men are lynched by right-wing vigilantes if they happened to be cattle traders. Why single out one community when others, too, require reforms?

The social and political cost of not having a Uniform Civil Code (UCC) is showing. Besides being mandated by Article 44 of the Constitution, the UCC is also part of the BJP’s agenda. It would unite India in true fashion where citizens irrespective of religion would follow the same laws for marriage, divorce, succession, etc.

Will Modi and his government bite the bullet while seeking to earn everyone’s saath and vishwas (support and trust)? 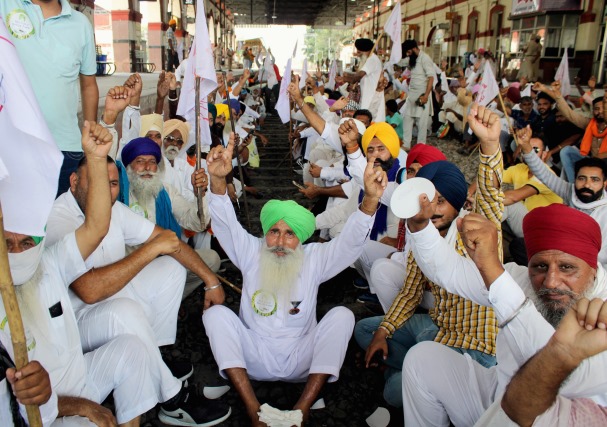