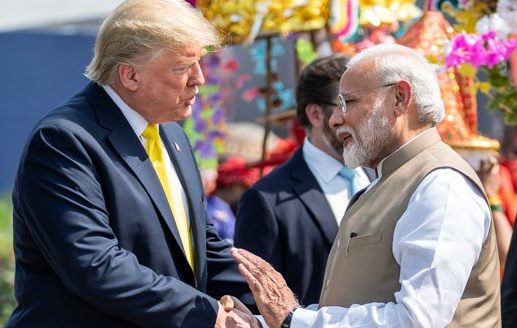 US President Donald Trump’s India visit in the month of February 2020 clearly indicates that India’s alignment with the US is now complete. India’s Foreign Policy approach for the last many decades has been of multi-alignment with major partners in the most geopolitically important regions of the world. This particular visit with the visible camaraderie between the two leaders, President Trump and Prime Minister Narendra Modi of India, proves to be a landmark. The defining feature has been the signing and announcement of the ‘Comprehensive Global Strategic Partnership’ at the end of Trump’s visit. The much-touted trade deal between the two countries, however, remains a task to be completed over the coming years.

In terms of geostrategy of the Indian Ocean Region (IOR), it marks the final acceptance of the US Indo-Pacific Region strategy for India. The practical framework or background of the Indo-Pacific strategy was already established when the US and India signed the Logistics Exchange Memorandum of Agreement (LEMOA) and Communications, Compatibility Security Agreement (COMCASA) were signed in 2016 and 2018 respectively. The LEMOA facilitates the US with using Indian military bases in the region certain conditionalities and case by case basis. The COMCASA on the other hand, allows India to access and purchase the military communications systems of US origin like the C-17, C-130 and P8Is. A combination of these arrangements leads to increasing interoperability between the militaries of the United States and India.

Since the Comprehensive Global Strategic Partnership has been signed, it accords India status of a Major US ally and this has ramifications for India in the larger international system. India’s clear and overt tilt towards the US may cause concerns in the Russian strategic circles but the trend clearly indicates that Indian military and weapons imports from the Russia are declining and India’s recent purchases have been from France, Israel and the United States. China has gradually emerged as a major partner for Russia, because of its multiple collaborative arrangements in the field of trade, transport, industry and finance.

For Beijing, the hope to draw India into its fold through Russia and multilateral agreements like the BRICS and SCO, will eventually fade with the increasing bonhomie between the two leaders (Trump and Modi). The resultant security and strategic apparatus in the IOR or the larger Indo-Pacific under the US leadership and India as a junior partner is directed towards the Chinese is no secret either.

With its subscription and eventual promotion of the terminology of the Indo-Pacific, a certain deviation from the Asia-Pacific of the Cold War years, India also has become part of the multilateral arrangements like the QUAD which provide tangible flesh and bone for the furtherance of the encirclement/containment of the Chinese. The leadership for the QUAD, again, comes from the United States, the other partners being Japan and Australia. The geographic location of Japan and Australia, which have been US allies since the Second World War and now India, indicates towards a certain geostrategic encirclement of China. Some international commentators have argued that the New Cold War has begun, and such new geopolitical alignments need to be factored in to make sense of the international system with Beijing as a major actor.

To conclude, the Trump visit, with all the pomp and glory aside, finally is a declaration from both New Delhi and Washington that US-India partnership is going to be a long-term affair. An important marker for South Asia from the visit is the de-hyphenation of the India-Pakistan connection from the US strategic mindset.

Indian efforts to make the international community realize that Pakistan’s support for the terrorism infrastructure in the subcontinent and outside have borne results. Donald Trump is perhaps the first president of the US to not visit both India and Pakistan on the same tour. The focus during the visit was solely on New Delhi and with that a clear signal that India is the only partner of importance for the US in the region. The expected outcome for Pakistan is that it will have to be content with the Chinese alliance, whereas India can still leverage its economic prowess and markets to maintain harmonious relations with China.

The benefits for India and US with the Comprehensive Global Strategic Partnership will be manifold and will be decisive in the affairs of the Indo-Pacific as well as the Indian Ocean Region.