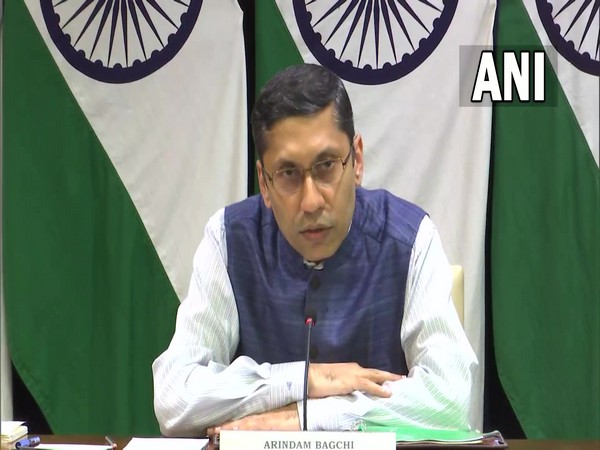 Terming China’s defence of Abdul Rauf Azhar, a top commander of Pakistan-based proscribed terror outfit Jaish-e-Mohammad (JeM), as “unfortunate”, India on Friday said that when it comes to the collective battle against terrorism the international community has been unable to speak in one common voice.

This comes as while all other 14 members of the United Nations Security Council (UNSC) on Wednesday agreed to impose sanctions on Abdul Rauf Azhar, a top JeM commander, China stood out by coming to the defence of the terrorist and placing a hold on the proposal.
Addressing a media presser, Ministry of External Affairs Minister Spokesperson Arindam Bagchi said, “I want to emphasize that it is unfortunate that when it comes to our collective battle against terrorism and the international community has been unable to speak in one common voice.”

Moreover, Bagchi highlighted that India will continue to pursue its principled position of bringing terrorists to justice including through the UNSC resolution.

He reiterated that India’s permanent representative in United Nations in New York during the United Nations Security Council (UNSC) open debate on August 9, had flagged this concern categorically to all members.

“We note with regret that a technical hold has been placed on the listing proposals,” Bagchi added.

Bagchi while quoting the Indian envoy to UN Ruchira Kamboj said, “There should be no double standards in dealing with terrorists. The practice of placing holds and blocks without giving any justification must end. It is most regrettable that genuine and evidence-based listing proposals pertaining to some of the most notorious terrorists in the world are being placed on hold. Double standards and continuing politicizations have rendered the credibility of the sanctions committee regime at an all-time low.”

“As you are all aware Abdul Rauf Azhar, the deputy chief of Jaish-e-Mohammad which is a UN proscribed entity was actively involved in terrorist acts such as the hijacking of Indian Airlines flight IC 814 in 1999 as well as the terror attacks on the Indian Parliament in 2001 and the terror attacks at Indian Army camps in Kathua in 2014 as well as the Indian Air Force (IAF) base in Pathankot base in 2016.”

Abdul Rauf Azhar “has been proscribed in Indian and US laws already therefore the placing of the technical hold against such unwanted terrorists is most uncalled for. India will continue to pursue its principled position of bringing these terrorists to justice including through the UNSC resolution 1267 sanctions regime.”

India and the United States wanted Azhar to be designated as an international terrorist and be subjected to a global travel ban and freezing of his assets, a proposal that would need to be agreed by all members in the 15-nation UNSC body but China, a permanent veto-wielding member of the UN and a close ally of Pakistan, delayed the move by putting a hold on it.

Reuters cited a spokesperson for China’s mission to the United Nations as saying that the delay was done as China needed “more time to study the case.”

“Placing holds is provided for by the Committee guidelines, and there have been quite a number of similar holds by Committee members on listing requests,” the Chinese spokesperson was quoted as saying.

Azhar has been under US sanctions since 2010 after the United States accused him of urging Pakistanis to engage in militant activities and organize suicide attacks in India.

On Tuesday, India’s Permanent Representative to the United Nations Ruchira Kamboj, in an apparent reference to China, said that the practice of placing holds and blocks on listing requests of terrorists without giving any justification must end.

India’s Permanent Representative to the United Nations Ruchira Kamboj made these remarks during a UNSC debate on Tuesday on threats to international peace and security caused by terrorist acts.

Ambassador Kamboj said India has suffered from the menace of terrorism for decades and has learned to counter this threat with resolve and firm determination.

“We hope that the international community will stand united in addressing this threat to humanity with zero tolerance,” she added.

A spokesperson of the US mission to the United Nations told Reuters, “The United States respects other countries’ needs to verify that a sanctions proposal meets their domestic evidentiary threshold to justify a listing at the UN.”

“The United States values cooperation with our Security Council partners to effectively use this tool in an apolitical way to stop terrorists from exploiting the global order to do their misdeeds,” the spokesperson added. (ANI)