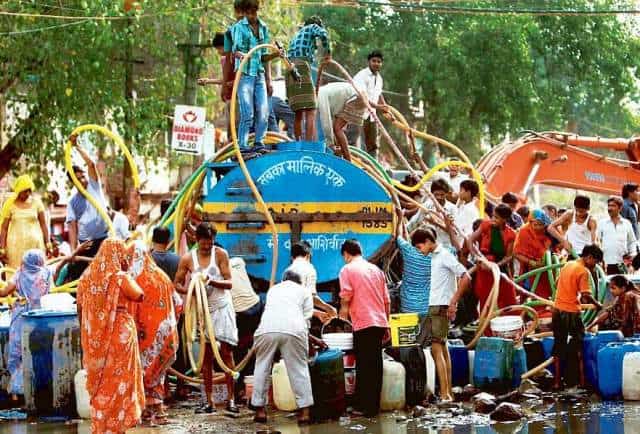 It’s official. And it is also shocking. By 2020, which is next year, as many as 21 major Indian cities are likely to run out of their groundwater reserves. This, incidentally, is a finding from a report by the Indian government’s think tank, NITI Aayog, which was established to replace the erstwhile Planning Commission. The 21 cities include India’s capital city of New Delhi, its satellite growth centre, Gurugram, and several others smaller cities in northern India. But it also includes important southern cities such as Bengaluru, Hyderabad, and the seaside city of Chennai, which has been in the news now because of the severe water crisis it is facing currently.

Chennai’s four reservoirs that supply water have gone dry leading to an unprecedented crisis in India’s sixth largest metropolis, home to more than 10 million people. Images, videos and news items of the scale of suffering on account of water scarcity in Chennai have rung alarm bells not only across India but also around the world.  Coupled with the fact that the monsoons this year are running at a 43% shortfall, Chennai’s water crisis has been unprecedented in a city that chronically suffers on account of lack of that vital resource. It has resulted in long lines for tanker supply of water—which are not only inadequate but also expensive and can be afforded only by the very rich—and violent protests that could quickly turn into water riots.

The situation in Chennai could be a foretaste of things to come across India as an estimated 600 million Indians face water shortage. More than 40% of India’s water requirements come from groundwater reserves and these are fast depleting in its cities but also in rural India. In Gurugram and Delhi, part of the heavily populated National Capital Region, daily dependence on water shipped by tankers to condominiums, buildings and well-off neighbourhoods has become a routine affair. However, the prices for water delivered via tankers is soaring and only the affluent can afford to pay for it. In Chennai, for instance, A government water tanker costs Rs 700-Rs 800 for 9,000 litres, but supplies are scanty and private operators are making merry. Private tanker water prices have soared to Rs 4,000-Rs 5,000 for 900 litres, prices that are way beyond what an average Indian household could afford to pay.

At the root of India’s water crisis are several key factors. First, the increase in population and, hence, the soaring demand for water. India’s population runs at over 1.3 billion and is likely to soon overtake China’s. This has created tremendous pressures on cities and smaller towns where people migrate in search of earning a livelihood. Cities have been growing because of relentless building of legal as well as illegal settlements. This leads to unabated pumping out of groundwater and the water tables across the country are being depleted. Second, there is a combination of factors such as drying up of tanks and lakes because of increased demand and successive years of rainfall shortages. Desalination efforts by which seawater in coastal areas can be converted to potable water have been hopelessly inadequate and ineffective. Third, the governments and local administration, particularly in highly populated areas, have been short-sighted and their plans to mitigate or be prepared for water crises of the kind that is afflicting India now do not match the growth in demand.

What could this mean? Besides widespread suffering (in some cases, life threatening ones) it could be just a matter of time before water riots break out on the streets of Indian cities and towns. Last Friday, the United Nations’ Human Rights Council cited reports and estimates to describe what it termed as a “climate apartheid” where only the wealthy would be able to afford to counter and survive the effects of drought, overheating, and hunger. And a World Bank estimate suggests that climate change could push at least 120 million more people into poverty globally by 2030. In India, the situation is already hurtling towards that.

India’s Prime Minister, Mr Narendra Modi, recently called for greater measures for rainwater harvesting and more efficient ways of limiting water wastage. However, even if adopted, such measures could already be too late. A scenario where water becomes exorbitantly costly and leads to protests and violence is neither difficult to imagine nor unrealistic. And that could lead to civil strife of proportions that the authorities may not be equipped to handle.

A major cause of the crisis that Indians face with regard to basic infrastructure and resources such as water, electricity, and proper housing stems from the runaway surge in population. But it also has to do with the government’s lack of long-horizon planning. In most growing urban agglomerates in India, growth has been lop-sided and haphazard. Take the case of Gurugram. Touted as the “Millennium City”, it is the base for several Fortune 500 companies and has emerged as a go-to destination for wealthy Indians who can afford the sky-rocketing property prices and rents. However, in terms of basic infrastructure such as electricity, water, policing, and roads, it lags far behind what is required. When builders and real estate developers zeroed in on Gurugram, it was not matched by urban planning that would have to be commensurate with the growth that would come.

Today, Gurugram and several other Indian cities are in the throes of a crisis, teetering on the brink of a manmade disaster. The problem is so acute that solutions at this stage could be difficult to envisage. The problem is exacerbated by the fact that 65% of India’s population is below the age of 35, and 50% below the age of 25. Millions of them are workforce eligible people with aspirations, longevity, and demands that need to be met. For any government, it is a Herculean challenge to face.

One solution could be to involve the private sector in collaborative strategies to fight the crisis. In areas such as water supply where the government’s wherewithal is limited and often inadequate, partnering with private enterprises and local communities could be one route towards solving the problem. If companies are provided incentives to partner the government in areas such as large-scale rainwater harvesting; distribution network for tanker water supplies; and limiting the surge in migration to cities (by making available livelihood opportunities in rural areas), things could take a turn for the better, or, at least, it could stem the spiralling fall towards disaster.

But even if such initiatives are adopted, they would be slow-burn processes that could take years, if not decades, before their effects are perceived. Meanwhile, in the short run, India’s cities—the situation in Chennai is a rude awakening—could be facing a doomsday-like situation.

Biden Close To Victory With Growing Lead In Pennsylvania