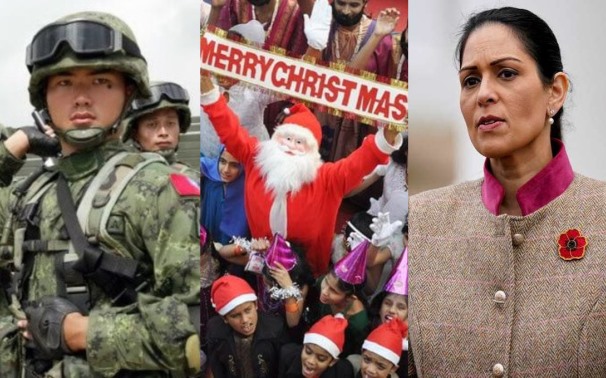 Weekly Update: A Bridge Too Near; Stealing Xmas; Priti Wants No More Pritis

China seems in a rush to get to the border in case Modiji calls them for chai and talks at the army posts. Or China wants to get its army to the border quicker when it decides it has had enough of talks and wants to start a bit more of territory that doesn’t really belong to it. So it is building a bridge over the lake Pangong Tso in Eastern Ladakh, an area it took over in 1962 in Sino-Indian war. China claimed that the land east of the current line of actual control belongs to it.

There has been dispute over this for a long time. In classic British ambivalence, the lines were never properly sorted. The British gave a considerable part of that region and some of Tibet to Raja Gulab Singh on paper but didn’t quite send a letter to China. Subsequently they drew new broders but apart from one border, the Royal Mail delivery didn’t reach China. So China is sticking by what it received in 1850s.

In fact Raja Gulab Singh under Maharajah Ranjit Singh had conquered quite a bit of land east of the current LOC in 1842. It seems the British redrew the boundary.

Now China wants a trade route to Karachi port to transport toys and other things made by its manufacturers. Lots of Middle Eastern people want toys and of course mobile phones and other China made things. Transporting these goodies through Karachi to Europe and Africa is also easier rather than ships going all the way through South China Sea. Hence the Belt and Road initiative is quite dear to China. Whereas India says it goes through the territory which was historically its (Ranjit Singh’s Kingdom).

So China is building a bridge to connect the northern beach of Lake Pangong Tso with the southern part. It’s only about 15 km inside the LOC. This will save some 6-8 hours of drive for the People Liberation Army (PLA) so they won’t have to go around the lake. They can get straight to the area of confrontation. Not looking good.

The Bhakts seem to have found another distraction to promote their very intolerant-tolerant creed. Boasting of a tradition that is accepting of all, they decided that others too need to be like that. So they crashed into a kids Christmas event at a Church. There they gave the confused little ones a lecture on theology, philosophy and history and at the end told them to say Jai Sri Ram.

Kids are kids. They are still learning. They probably thought this was all part of an act. Or they were frightened and decided to chant what the Bhakts were saying, sensing that their Christmas has been hijacked in the name of pluralism or Hinduism or Hindutva.

This is turning the whole idea of Hinduism on its head. For decades, if not centuries, Hindus have been proudly saying that Hinduism is one of the most tolerant, accepting and pluralist of all religions and belief systems. But to barge into some other religion’s holiest celebration, take it over, frighten the children, the ladies (the nuns) and the elderly and force them to chant for your own religion is a new for the civilisation that Bhakts are proudly promoting as greatest. Stealing Christmas. Or they have misunderstood the Vedas. Shouldn’t the Mahasabha be talking to them?

UK’s Boris Johnson is so desperate for trade deals these days that he and his wannabe Prime Minister, the Foreign Secretary, Liz Truss are willing to sign a deal with India and give study and work visas to the whole of India if Modi wants. Its quite a turn around when UK wouldn’t ever hear of letting a few hundred Indian students work after finishing their education. Times change.

However it is not so easy. Priti Patel, doesn’t want more Indian in UK. There might be too many Pritis then in Britain. Well, she doesn’t want any more immigrants in UK, be they Indian, African or whoever. She is trying her best to turn the illegal boats bringing migrant people from Europe back to France. She is not having success. She is the Home Minister.

It is all a bit strange. Priti Patel was much feted in India when she became the Home Minister. From Gujrati background like Narendra Modi, there was hope that she would make it easier for Indians to come to UK for further studies in interest of knowledge transfer. It was generally thought that she might persuade her cabinet colleagues that it will be in every one’s interest. Yet it’s her opposing the very idea! And surprisingly it is Liz Truss, a right wing politician, who appears to be more in favour of letting more Indians into the country. Politics has many twists.