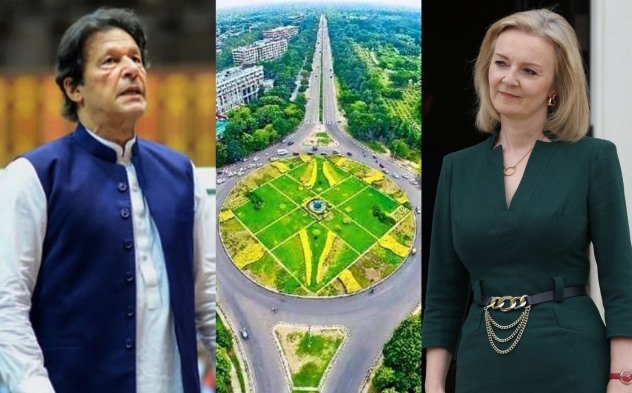 Khan The Pathan Brought Down: The great Khan Pathan, Imran Khan, has also been shafted back to earth and his assumption of invincibility punctured by the real power of Pakistan, the Army. Khan was toying with outsmarting the Army. When on the verge of being removed from office, dismissing the C in C of the Pakistan Army seems to be the favourite last desperate preoccupation of many Prime Ministers of Pakistan. But they soon realise their office is a clerical extension of the Army and not the throne of power. They get into a habitual error of thinking that because they got the mandate through votes, they must be more popular and powerful than the Army. The Pakistan Army, like armies elsewhere, does not have a single vote nor does it seek any. It has the tanks and the finance, both of which tend to be more powerful in any political set up.

Now why our westernised anti-west star, the great Imran, international cricketer and once sought after by every socialite lady in the west, thought he could become pro Kremlin and at the same time recruit the democratic mandate in his favour is a mystery. Democracy wallahs are supposed to side with USA and authoritarian leaders on the side of China and Russia. In Pakistan, it is a bit topsy turvy. The Army that hasn’t a single vote, is pro USA, while the democratic elected leader is pro authoritarian Russia.

Pakistan’s perennial problems has been a failure to institute a constitutional structure that reflects the real structure and distribution of power in the country. But it was forced by the United Kingdom to adopt a democratic constitution. The UK calls itself as mother of democracy.

Contrary to popular myth, the UK is really a monarchy and power exercised by some powerful business interests. The System is all in the name of the Monarchy. The Queen has a Government to do the running around and manage the country. The Government is elected. But the leader that pleases Mr Murdoch and a few other British Barons, usually gets the seat of power. The one they don’t like, tends to get hammered in the media, owned by powerful barons.  Even though elected, the Government rules and acts on behalf of the Monarch, not the people. In effect, the Monarch asks the people to elect among themselves a leader and a party to manage her country. Brilliant. Its rule by the Barons, for the Monarch, with the people.

Pakistan on the other hand was bullied by this Monarchical -Baronial UK to adopt a democratic system to be consistent with the requirements of that other non-democratic institution, the Commonwealth. The Commonwealth insists that all member countries be democratic as Britain supposedly is. But it has a permanent non-elected leader, the Queen. And no one has asked when will Britain become a truly democratic State, except for the Sikhs. Once in Britain when the Government patronisingly lectured the Sikhs to become modern and adopt elections in their Gurdwaras, the Sikh leaders told the Government that when the head of State in UK is elected, then they will also pay more attention to Government sermons. The Government backed off.

So we have perpetual issues in Pakistan. Power is with the Army. The Army has set up a democratic front to shut the Brits and Americans up. Meanwhile Pakistani people think they are democratically holding power to account. It serves everyone. When things go wrong, the Army blames the elected leadership and people get a chance to elect another leader who can’t sort the mess either. UK and USA are happy that the country is listed as ‘democratic’ and can tick the boxes. A bit like medieval crusades, when the converted could do anything such as rapes, pillages etc, as long as they called themselves Christian. But if they weren’t Christian, they were called the devil incarnate, child eaters, witches and any grotesque character adjective that the pious Vatican could think of for non-Christians. In modern times, the UK-USA alliance does the same for countries who are not ‘democratic’. India therefore is saved from this name calling.

Time changes but nothing changes. Let’s hope one day Pakistan will have the ability to set up a constitutional structure that reflects the levers and distribution of power as it really is. In the meantime Mr Khan has been bowled out. We hope he has enough money to go into exile in Dubai.

Well, who would have thought that one day the nationalist Hindu party, BJP would be screaming for Chandigarh to be recognised as capital of Punjab? ‘Qudrat’ (Nature) indeed is ironical.

During the militant days of Akali run Anandpur Sahib Resolution campaigns in the late 1970s and then Khalistan campaigns of 1980s, one of the key demands was that Chandigarh should solely be the capital of Punjab. The Punjabi Hindus opposed it.

Ever since the family run Akali Dal Badal came to power, the issue of Chandigarh seemed to have evaporated just as the rest of Anandpur Sahib resolution did. Now that Akali Dal can only be seen with the Hubble Space telescope from outer space, as otherwise it is no where to be seen in the levers of power, the BJP decided it was going to raise the issue of Chandigarh. Obviously it is to start a headache for Aam Admi party in Punjab, but the irony is too much not to be commented on. Fact is that in reality all BJP Punjab has to do is ask its Daddy BJP in Lok Sabha to hand over Chandigarh to Punjab. But where is the fun if it does that?

Britain Told To Look Around

The Indian Foreign Minister is not as much of a rottweiler as the Russian foreign minister Sergey Lavrov is, but S Jaishankar certainly gave the British Foreign Minister an earful. In reality Jaishankar is not aggressive at all in dealing with other leaders. He is the epitome of a diplomat. Lavrov, on the other hand can get annoyed and throw put downs with ease.

When the British Foreign Minister, Liz Truss, went over to India to give a colonial dressing down to Jaishankar reminding him that India is part of the democratic block and further told him to get in line and oppose Russia, the mild mannered Jaishankar did a Lavrov.

He told her that times had moved on and the world is in a period of multipolar power blocks. India will make its own decisions and not be dictated to by the Brits. Liz Truss, who likes posing as Ms Rambo in tanks, quickly belted up, took the next flight home and sat mopping in her toy tank in the back garden, firing soap bubble shots at the Indian Foreign Minister. That has not been reported or verified yet, but not one beyond possibility. Liz Truss always has the look of a Captain Britain with raised eyebrows.

Do you understand Journalism and the duties of the Journalist, or you just publishing the news for sake of it. The news should be truthful and transparent. Journalism does not believe in reporting in a manner to divide between the religion or religious belief. One shall not label parties on the name of religion. Grow up and get a life, publish the real truth on the real issues. If you have so much courage why don’t you publish about how punjab has been eaten by drugs and state government did nothing, whatever party it was.