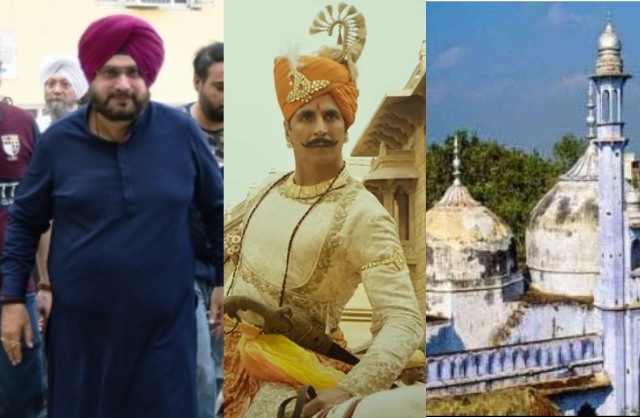 Navjot Sidhu, a maverick, has hopped around many roles but hopping into jail was not the one he probably scripted for himself. Sometimes events and ‘Qudrat’ sabotage the best of plans. Sidhu first became a great cricketer, starting his rise in 1981 to dizzy heights in international arena. Sixter Sidhu was his nickname as he had a habit of hitting sixers. But even that was not uneventful. Sometimes he swore and got himself kicked out and sometimes he just walked out as he did in the match against England. Yet, his talent always got him back. Finally the sixes ran out and he retired in 1999. Not for him to the idea of buying a farm, raising chicken or growing rice.

Sidhu joined media as a commentator, then as a comedian and even acted in a film or so. He became famous for his one liners. He hopped around various stations as his tongue got the better of him at times, getting him the odd sack. Stations had to drop him, only for him to surface in a different station and finally back to the one that booted him. His talent at laughing at his own jokes before anyone else even got it, was infectious. Everyone laughed and his bank balance also laughed.

Then he started hopping in politics. First it was BJP, then independent, then Congress and he was even wooing Aam Aadmi. Perhaps he was too big or hot or a loose cannon for the control-obsessed Kejriwal to handle. In Congress he created enough entertainment to be a constant headliner in the media, a media sixter if any. Finally he was bowled out from political stardom in 2022 when a relatively unknown grabbed his Amritsar seat. Qudrat again!

Still groping around for a role after his political demise, the esteemed judges of Supreme Court obliged him with one. They gave him the title of prisoner number 137683 in Barrack no 10 of Patiala jail for a year! That was one role Sidhu had probably never expected he had a talent for, but all signs are he is playing well. He doesn’t like the paani dal (hot water with a sprinkle of masala) containing six peas and a potato slice served with crusting roti. So he has gone hungry and still grabbing the headlines.

Sidhu landed with this role because Supreme Court decided to hear a case from 1988 after a few decades. It finally came up for a final hearing in 2022 at the Supreme Court. Voyager 1, the space craft launched in 1977 reached interstellar space in 2012. So the Indian judicial system, known for its ‘justice in eternity’ has just about beaten the space mission by a year (77-2012 =35 years: 1988-2022= 34 years) and Sidhu should be grateful that our SC is faster than space travel.

Sidhu got the sentence for his slightly lesser known talent. That of landing a hard punch. In 1988, in a road rage incident he is accused to have punched a 60-year old man. The fist blow caused death.

There are going to be a lot of headlines with Sidhu tantrums in Patiala Jail. But he has company with Bikramjit, his political adversary. If he is lucky and Bhagwant Mann gets around to it, he might be joined by a few more political celebrities, possibly from Akali Dal and Congress.

As the common Indian is trying to take cover from searing heat and eating a reasonable meal a day against rising fuel and food prices, there are still parts of the nation where even more important issues such as attempts to get to the one place where a certain group will get access to God and what caste was Prithviraj Chauhan.

Religion and caste is never further than micromillimeter in Indian politics. However times slogans of unity, one nation, ekta etc. are promoted by Governments, the people have a habit of blowing up in identity politics. The very political class that doesn’t want this, also joins in.

Heat, inflation and climate change are miniscule problems compared to the caste and religion conflicts. After all they have been going on for thousands of years in India, whereas climate change issues are only a few decades old, without a pedigree.

Prithviraj Chauhan was a King in twelfth century. His last war is said to be with Muhammed Ghori. Ghori defeated him and paved the way for Islamic rule in India. He is called the last Hindu king, although others dispute that as Hindu kings continued to flourish in south India and parts of North India.

Bollywood is making a film. Chauhan is a subject that draws in box office money. Nothing wrong with that. No one is fighting over or complaining about the money.

But it is what Chauhan is being depicted as that has started another war, albeit peaceful at the moment. No it’s not something as trivial as depicting him as ‘Last Hindu King’. It’s far more important.

Chauhan has been claimed to be a Rajput. The Gurjars don’t agree. They say he was a Gurjar. The film maker is lost.

Rajputs have a national body. In fact it is an activist movement called ‘Karni Sena’ or more precisely Shri Rashtriya Rajput Karni Sena. In 2017 the Karni Sena even threatened to cut off Deepika Padukone’s nose for her role in Padmavaat. It became famously infamous when it started protesting against Jodha Akbar film in 2008.  That move ended with Rajasthanis having to take a bus to Gujrat to see the film.

Now the Sena wants the title Samrat and surname Chauhan to be used. They want him to be referred as Samrat Prithviraj Chauhan. They are threatening to gherao theatres around the country if film maker does not oblige.

The film maker who only wants to make a few crore rupees, doesn’t want to upset the Rajputs or the Gurjars. The title Samrat and surname Chauhan are not being used much to the annoyance of the offended Rajputs.

The Gurjars, have their own national movement called the Akhil Bharatiya Veer Gurjar Mahasabha. They don’t want word Chauhan used. They say that Prithviraj was a Gurjar and has been historically kidnapped or hisnapped (our word from history and kidnapped) by the Rajputs.

They have told whoever wants to listen, that they too have a presence from Kanyakumari to Kashmir. They can disrupt the film and stop it in all the states of India. They have filed some sort of a case. That’s a few crores gone down the drain for the producer.

The only redeeming fact is that both groups are resorting to peaceful tactics such as protests and courts, instead of a spears and talwars as would have happened at one time.

Murti In The Mosque?

In Varanasi, on the other hand, a group of women have also gone to court inspired by the BJP game of claiming every other religion’s holy place as a a building built over a hidden ‘murti’.

In this case the murti exists. It is in the territory of a Mosque. It’s probably been there for few centuries. However the women claim that they must be allowed to ‘worship’ or do puja there. Perhaps their call to the murti won’t be heard if it is in another place.

Looking on the bright side, ‘life never changes in India even for centuries’.