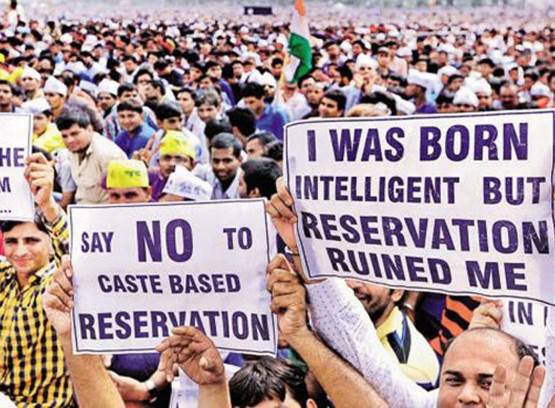 Reservation In Promotion Is A Flawed Idea

The Supreme Court’s judgement last month, validating the Uttarakhand government’s decision to fill up posts without providing reservation to SC/STs in government jobs, has sparked off a debate on the bench’s judicial prudence. This is probably ‘reservation’ is a subject which draws strong arguments both in favour and against the subject. While it is understood that communities in India which are backward and do not have adequate representation in public jobs require handholding, it cannot be taken as a right for demanding jobs, much less promotions, from the state.

There are clearly laid down judgements which say that the state is not obliged to give reservations to people from the scheduled caste and scheduled tribes in matters of jobs and promotions and the February judgement by a division bench of Justice L. Nageswara Rao and Justice Hemant Gupta only furthers the argument.

The verdict was pronounced in Mukesh Kumar & Anr vs The State of Uttarakhand and Ors. The case is related to appeals seeking reservations to Scheduled Castes and Scheduled Tribes in promotions in the posts of Assistant Engineer (Civil) in Public Works Department, Government of Uttarakhand.

The apex court set aside a High Court of Uttarakhand order, where among other things the High Court had directed the state government to collect data regarding the adequacy or inadequacy of representation of Scheduled castes and Scheduled Tribes. The court had then directed that the state’s decision whether to give reservation or not, ought to be backed by the data. It had also directed the government of Uttarakhand to reserve the post of Assistant Engineer (Civil) for scheduled caste and scheduled tribe candidates.

The idea of reservation in promotion is fundamentally flawed. One cannot claim a right to reservation at every step of the ladder. This cannot go on, in perpetuity. It is still okay at the time of appointment to the government job, but to expect reservation in promotions tantamount to encroachment on the rights of other individuals. It violates the right to equality granted by the constitution under Article 14.

The apex court rightly upheld the right of the state to choose if it wants to give reservations to the members of the Scheduled Caste and Scheduled Tribe communities, whether or not they are adequately represented in matters related to jobs in government departments.

In doing so, the bench also said in no uncertain terms that it was not mandatory for the state government to collect quantifiable data to indicate if the members of the Scheduled Caste and Scheduled Tribe communities were adequately represented or not.

On the contrary, if the state chooses to give reservation to individual/s in government jobs, the state concerned shall have to place before the Court, the requisite quantifiable data and satisfy it (Court) that such reservations became necessary on account of inadequacy of representation of Scheduled Castes and Scheduled Tribes in a particular class or classes of posts, without affecting general efficiency of administration as mandated by Article 335 of the Constitution.

The apex court further made it clear that no court could issue a direction to any state government to provide reservation, upholding the laid down law in the C.A. Rajendran (supra) and Suresh Chand Gautam (supra) judgement. The judgement makes distinction between a court’s authority to interfere with a policy decision and issuing orders to make a policy in a particular way.

In the 23-page order, the apex court also set aside high court’s direction to the government to reserve the post of Assistant Engineer (Civil) for scheduled caste and scheduled tribe candidates. The high court’s assertions were not only erroneous but sans logic.

The top court also ruled that Article 16(4) and 16 (4A) of the Indian Constitution cannot be used as a recourse by appellants to demand reservations in government jobs and promotions calling them as “enabling provisions”.

Article 16(4) and 16(4A) allows a State to provide reservations to a SC/ST in matters of appointment in government jobs and promotions, as long as the State believes that the SC/ST is not adequately represented in government services.

The appellants, under the said provisions in law, argued that the state was obliged to give reservations in promotions for the upliftment of the members of the Scheduled Caste and Scheduled Tribe categories – a point rejected by the top court.

All citizens are equal before the law irrespective of the category one belongs to – general or reserved. At no point can a privilege of one (reservation in promotions) encroach upon the right of the other which is “equality” in matters of appointments and promotion in government jobs.

By dismissing the appeal, the Supreme Court in its wisdom, once again stood for equality and justice as envisioned in Article 16(1), which calls for equal opportunity for all citizens of India in matters relating to employment or appointment to any office under the State.

The government should examine promotion or employment on a case-to-case basis as one size fits all strategy cannot be applied everywhere and there are sections which need support and initial handholding. But, a State reserves the right to decide if it wants to give employment or promotion to an individual. Any attempt to quell it, will not withstand the judicial scrutiny and be quashed, as has been demonstrated in this case.