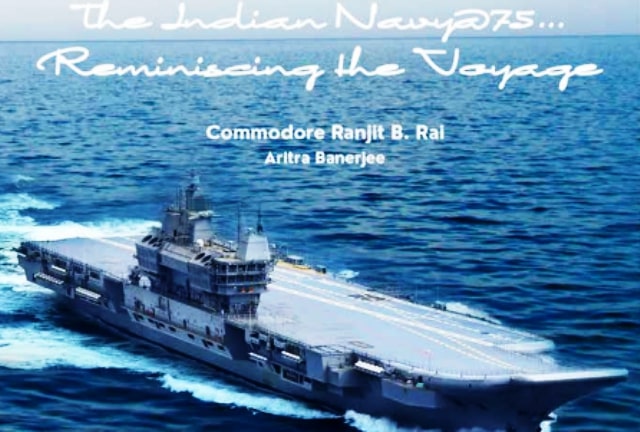 Indian Navy@75 – The Rime of The Modern Mariner

When a Task Force of the United States Navy’s 7th Fleet headed by USS Enterprise sailed into the Bay of Bengal in December 1971, ostensibly to counter a Soviet flotilla but actually to impact the ongoing conflict in favour of close ally Pakistan, it was India’s hour of reckoning. Till high-octane diplomacy helped, the only defence arm protecting the Bay, and carrying out assaults in the Arabian Sea, was the Indian Navy, a tiny force by the two superpowers’ reckoning.

“What would have happened had you come face-to-face with the Enterprise?” Looking back, then Eastern Command chief, Vice Admiral N Krishnan’s response to the question this writer put a month after the conflict is immaterial. What remains is the supreme confidence on the face of that chubby sailor in the Navy’s hour of glory and its long-awaited, full-blooded participation in a war that India won.

That hour, the centuries that took to build it, and the Navy’s evolution over the next 50 years are vividly recorded by Commodore (retd) Ranjit B Rai, co-author Aritra Banerjee and dedicated contributors in The Indian Navy@75… Reminiscing the Voyage. An individual’s labour of love, it deserves a warm welcome. Rai’s many books done earlier and his naval museum to record India’s naval prowess make him a worthy sailor storyteller.

Rai was a rare witness to some of the Navy’s ‘sea-mark’ moments, from Goa’s liberation to the 1971 war to the operations in Mauritius, Seychelles, Madagascar, the Maldives and then the disastrous Operation Pawan in Sri Lanka. A former Director, Naval Operations (DNO) and Director, Naval Intelligence (DNI), he adopts an autobiographical style even as he tracks down his peers and shipmates, long after their retirement to construct a narration that, given India’s notorious lack of a sense of history, could otherwise drown in the whirlpool of time.

It has not been easy in a country that has always faced adversaries from the north. The common Indian psyche is to think of the soldier and the airman, much less the sailor. Launching “Make in India”, it has perforce indigenized, more than the two other services.

It still needs emphasizing that the Indian Ocean has always occupied a vital place in India’s national security and economic prosperity, more now as it has risen on the world stage. The Indian Ocean’s waters wash the shores of 40 countries and have four strategic choke points and 90 per cent of India’s trade by volume, and 85 per cent of oil imports for India come by sea. Half of the world’s container and one-third of the world’s cargo traffic pass through this region.

Perceptions have changed. The British thought IN was not “mature enough” to acquire submarines, till the Russians stepped in. Australia was alarmed over India’s “blue water ambitions” in the 1980s. Now it partners the Navy along with US and Singapore and in the IN’s outreach, including the Malabar naval exercises.

The book stresses that over time, the Navy has gained importance as the 21st century is predicted to be a Maritime Century and the centre of gravity of the world has shifted East, with the rise of China and India.

Yet, for long years the Navy remained the “silent Cinderella” when it came to allocating funds. Ships and submarine acquisitions suffered long waits. The inter-service rivalry forces ‘silence’. On writing on the Navy’s wish list, pre-Budget, for a Mumbai paper in 1983, this writer’s editor was requested by the then Western Command chief, late Admiral R H Tahiliani, to ask me to pipe down a bit. Mercifully, the Navy has now been given ₹47,590.99 crore ($7 billion) for capital spending in 2022-23 and is tasked to be the net security provider in the IOR.

No other service has had to change the basics as much as the Navy. Rai tells you how a question from Soviet Admiral Sergei Gorshkov visiting INS Nilgiri in 1960, “where’s the weaponry?” prompted the Navy to alter its British-based philosophy to Russia on weapons fit. He traces the IN’s journey from the British, to the Russians and now, many others in the new century to reach the world class.

The Navy evolved from buyer to builder post-1972 but its limitations remain. Cmde. (retd.) Uday Bhaskar notes that while it can design ships (few other nations do), build the hulls and develop some of the missile systems, it still imports most of the gadgetry and weaponry that make a ship sea and combat-worthy.

As the only service that has to work outside the territorial boundaries and on the high seas, the Navy’s challenges lie there and far outweigh its progress. Take just the aircraft carrier. After six decades of refitting foreign ones to its needs, it has just acquired its first indigenous one. Late-coming China has three and is projected to possess five or six by the 2030s.

Indeed, China’s advent into the Indian Ocean Region (IOR) poses the biggest security threat that India must tackle. The reality is that IN could pulverise Karachi port and harbour in 1971, and blockade it in 1999 during the Kargil conflict and in 2001 when the Indian Parliament was attacked. Now, the Chinese presence and a heavy stake in the shape of the China-Pakistan Economic Corridor are bound to prevent such a recurrence.

As the only military service that operates outside the country’s borders and on the high seas, IN plays a key diplomatic role, of hard and ‘soft’ variety. Rai correctly says IN is a necessary adjunct to the foreign office and matches its diplomatic objectives far and near. Its noblest mission, of course, was in 2004, to reach, within 12 hours of the Tsunami, Indonesia and the Malacca Straits, its guns covered, not blazing, on a disaster relief mission.

As Defence Advisor posted in Singapore in 1991, Rai takes the widest possible picture of India, then on the cusp of historic economic reforms. He narrates his experiences when Manmohan Singh under P V Narasimha Rao and with Montek Singh Ahluwalia, marshalled the much-needed resources. India began to “Look East” and it is just as well that it now “Acts East.” As emphasized by Harsh V. Pant, this is where its security lies given the need to counter China’s pushy advances.

The Indo-Pacific has become crucial to India’s statecraft as evidenced by the Prime Minister’s articulation of Sagar (Security And Growth for All in the Region), and Mausam and Sagarmala. The changing security architecture in the maritime Indo-Pacific with the rise of China and QUAD behoves the Government and the Navy to review India’s maritime strategy and the strength of platforms it needs, and swiftly provide the funds.