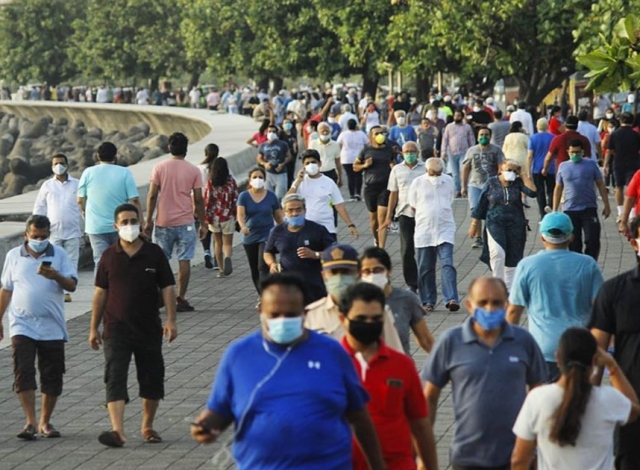 Virus Is There, Fear Is Gone

In social sciences and critical theory this would be called a kind of epistemological rupture. A break in time, in self consciousness, collective understanding and individual and public perception. A certain paradigm shift.

By all accounts, in terms of human behavior in public places, especially by the poor in the margins, the widespread fear, phobia and terror of the deadly and killer Coronavirus seems to have passed. In simpler terms it can be stated that the fear has gone, even though the virus remains alive, and blooming. And it is both good and bad news at the same time.

Good news because the hustle and bustle in public places seem to have come back with a fervour and passion which seems to have reaffirmed the strong human will to survive and live and perhaps enjoy, even in the worst case scenario. Large parts of urban settlements, be it bustling tier two towns in north India, or metros like Delhi, Kolkata and Mumbai, thousands seem to be stalking colourful market places, savouring street, including ‘Chinese momos & chowmein’, cooked on roadside carts, smoking and hanging out. Apparently, there is nothing like a mass killer pandemic on the loose lurking in god knows which nook and corner. All izz well!

The fatigue of the lockdown, the slow despair of the extended quarantine, the holed-up compulsion of the four walls, the prevalence of distress, disease and death everywhere as visible and invisible ‘atmospherics’, the ring tone warnings about the virus on phones, the imposed isolation and fear of travel and movement, has recoiled. The closed borders and markets, the shut offices, malls, the Metro or local trains not running anymore, has all deeply impacted the social consciousness of communities in urban centres. Especially of the working class.

The dark irony is that this just might not end in 2020, which has been largely a bad year, and might extend up to the next year also. This seems to be the universally depressing public perception.

Already, around 29 lakh people are infected in India, with over 60,000 dead. This might touch many more thousands and lakhs by the end of September. The health infrastructure has not really showed signs of radical improvement, especially in terms of affordable healthcare, and the vaccine still seems elusive. Media reports say at least 18 million salaried employees lost jobs in India till July. The curve has certainly not flattened and is rising exponentially and dangerously.

In rural India, for instance, especially in the Hindi heartland where millions of workers migrated from urban cities due to lockdown and the near absence of affordable health infrastructure, there might be a volcanic explosion one day. With no ground reporting, and now floods in several states, it will a sad situation.

Even the most optimistic supporters of the current regime cannot claim that the Indian government, with its huge population, is anywhere close to declare that, okay, hereto, be safe and cautious, but there is nothing to fear. We have controlled the pandemic. Now we will shift focus to the economy and charge full steam ahead to turn the graph of the collapse around and mark a decisive paradigm shift. Nothing of that sort seems to be in the cards in the near future or later.

Surely, India will not be able to declare a Covid-free society as many Scandinavian countries, France, New Zealand, South Korea, Taiwan, Singapore, even many parts of China and Europe, have declared. India will continue to do what it knows best – fudge, flounder, hesitate, remain trapped in forebodings, and generally lacking the strong will or structure to stop and control the pandemic once and for all, despite our brave and resilient doctors, nurses and healthworkers, especially in the government sector. Many of them have fallen in the line of their duty.

In this context, people seem to be braving it out. The small carts, paan-cigarette shops, the man on a cycle selling fried snacks, the man selling vegetables, the painter, the plumber, the electrician, all seem to be turning the corner. Or else they will just die, if not by the disease, then by hunger and helplessness.

ALSO READ: ‘Street Food Lovers Are Back With A Vengeance’

So people are thronging the markets, not just the small town markets but also the crowded hubs of large cities, shopping and window-shopping. Indians love melas and there is one in every locality now. The youth are sitting inside closed air-conditioned restaurants. Some are smoking out in the open, sitting close to each other, happy in their defiant and dreamy youth. It is infectious, this sudden collective joy to be out in the open, the smells and flavours of the old life. Social distancing and masks have disappeared from fatigue.

Indeed, you can’t but smile in appreciation when you realise that the lethargy and isolation have really got to the people, and they want a break. Life and bonhomie is as normal as before, on the streets and in tea shops. For all you know, the pandemic was just a hoax.

But that is not the truth. Tens of thousands of migrant workers have reached their stagnating villages and small towns, and with no economic or health infrastructure, how will they cope with their daily lives, remains a conjecture. In large cities and their suburbs, the thousands who would throng to the mahanagar for work daily, are stuck in their homes with no work because the local trains and buses are not running.

In this terrible and relentless scenario, indeed the fear may have gone, but the virus remains out there as a silent and stated killer. In the life of a country, this is both a happy and a tragic dilemma.