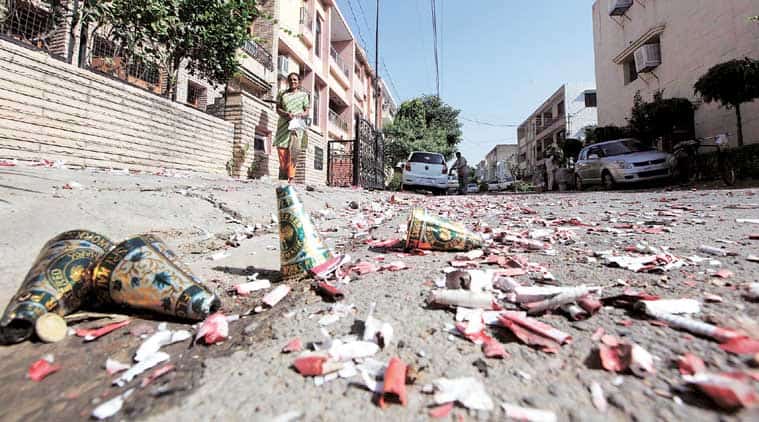 “What have we done to be singled out like this?”

Lokmarg met some bulk dealers of firecrackers in Gurugram, a component of the NCR. Here’s what one had to say: Rakesh Goyal (first name changed on request), 41 years old, bulk trader for firecrackers in Gurugram, timber trader through the year “We have been destroyed by the court order. This is not our only business, it happens only once a year but it gives us very good profits in a very short time. “I have been selling crackers for a decade now. I’m up to investing a couple of crores now, and like always I’ve expected walk away with a 25 to 30 per cent profit in less than two months. I’ve never had unsold stuff, the leftover goods are picked up at a markdown by Delhi traders who have permanent licences. “Now my godowns are full of firecrackers because the court ban came just a day or two before sales would really begin. “You don’t understand how we’ve been made to suffer. The Supreme Court had banned permanent licences for firecracker sales in November last year. Then it removed the ban in September this year, and everybody went for temporary licences. Now it’s re-imposed the ban to test what difference it makes to pollution. “This test is ruining our lives. We’ve got no place to go now. I’m going to have to get rid of my stocks and God knows what a hit I’ll take. Or I keep them stored for next year, which is a risk in more than one way. “Do you know the GST rate on crackers? It’s 28 per cent. “There’s a ban on stubble burning in the paddy belts of north India. Is anybody obeying that ban? What have they done to check traffic and pollution from cars? What have we done to be singled out like this?   In Delhi, traders had the same pain even though they spoke in different voices. “The government spends crores on killing mosquitoes. Bursting of crackers on Diwali is a boon as it helps dealing with diseases like dengue and malaria. There isn’t a lot of pollution generated in just one day anyway,” said Jai Kishan Das, 72, who otherwise sells soft drinks and temporarily does the business of crackers in the Diwali season. His grandson said: “We will celebrate October 19 as black Diwali and would start selling crackers after the ban is lifted on November 1. There will be a Diwali celebration with crackers on November 6 here.” Amit, 42, from Ajit Fireworks, said their family business of crackers has been running for past 50 years and “people’s livelihoods will have a tragic impact” from the court’s “experimental” order. “The court must have taken the decision due to reasons it found relevant. For us, there is no relevance of it at all. There have been a solid instigation that has led to such a wrong decision. One day control cannot change the overall situation of the environment. “We get very little business opportunities on other days and during other festivals. Diwali is major for us. Does the court have any answer to our problems?” he asked. Satya Prakash, 54, runs a general store in the same bazaar and does additional business of crackers this time every year. “There won’t be any noise or dirt this Diwali because of the ban but the lives of people only selling crackers will be affected tremendously. “So many people come from villages specially for this trade. Millions are associated with it. They have been left helpless. Hence, it is a very insensitive order,” he said.

The ban on the bang

The Supreme Court on October 9 banned the sale of firecrackers in Delhi and NCR till November 1 to curb rising pollution levels during Diwali. Last year on Diwali, PM2.5 —the smallest kind of deadly particulate matter—levels in some areas of Delhi increased to 1,238. The World Health Organization recommends that PM2.5 is kept below 10 as an annual average, as exposure to average annual concentrations of PM2.5 of 35 or above is associated with a 15 per cent higher long-term mortality risk. Delhi and NCR are one of the worst polluted regions in the world, with an annual average PM2.5 measurement of 122. On Tuesday, average air-quality index reading for Delhi was said to be “very poor” and “severe”, amid apprehensions that firecrackers on Diwali would further worsen the air quality.

The 2016 post-Diwali scenario is unlikely to be repeated this year on Friday after Diwali even in the worst-case scenario where firecracker emission in the national capital remains same as in 2016, forecaster SAFAR said on Monday. However, according to the System of Air Quality and Weather Forecasting and Research (SAFAR), the air quality on October 20 and 21 will still swing between “severe” to “very poor”, with Delhi University North Campus expected to receive maximum pollutants. At “very poor” level, outdoor physical activities are discouraged, while in “severe” or “emergency situation”, even stepping outside is discouraged. Delhi faced its worst air pollution and smog of decades in 2016 post-Diwali scenario, with unabated and unchecked stubble burning in neighbouring states being coupled with additional emissions from Diwali firecrackers took the PM2.5 pollution far beyond the worst-case scenario. Schools were closed after November 6, 2016 with the OPDs at AIIMS recording 35 per cent and Safdarjung Hospital recording 20-25 per cent spike in the number of patients with respiratory issues. The international permissible limit for PM 2.5 is 25 micrograms per cubic metre, while for India it is 60. (with IANS)   // ]]>