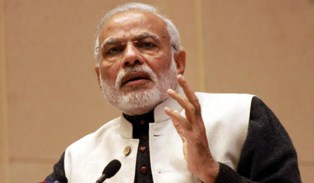 Modi said that there has been a “positive change” in the mindset and self-confidence of the people ever since his government came to power in 2014. “If we see the country as a living entity then the positive attitude that has come to India, was never before,” Modi said while addressing the inaugural session of the Hindutan Times Summit. Earlier the youth, women, farmers and the poor had minimal faith in the country’s resources, Modi said and added that now they trust the government and its resources. Emphasising that the citizens of India in 2014 not just voted to change the government, Modi said that people wanted and therefore voted for “change in system that will be permanent, stable and irreversible”. “Every where in the country, someone had to fight with the system day and night. I am trying and have committed that there will be irreversible change — ease of living will improve,” said Modi.

‘Aadhaar a weapon against benami properties’ Describing Aadhaar as a major “power” to bring about an “irreversible change” in the common man’s life, Modi on Thursday said that the Unique Identification Number will now be used in cases involving benami properties. “By linking Aadhaar to Mobile and Jan Dhan, we have created such a system that could not have been imagined few years back. “In last three years, with the help of Aadhaar, crores of fake names have been removed from the system. Now it is going to be a big weapon against benami properties,” Modi said while addressing the inaugural session of the Hindustan Times Summit. He said that the country saw a “behavioural change” after demonetisation, which helped in converting to a “clean and healthy economy”. “For the first time after Independence the corrupt people are scared of transacting in black money. They are scared of being caught. The black money which was earlier base of parallel economy, has now become part of formal economy,” he said. “Such an irreversible change is getting boost from Aadhaar. Aadhaar is such a power through which this government want to ensure rights of poor. It is also playing a big role in providing subsidised ration, scholarships, medicines, pensions and other government subsidies,” he said. He said the day the country would adopt maximum transactions via digital addresses, “organised crime would come to an end to some extent”. Modi said “big transformations” do not come easily and for it “hauling up of the entire system was needed”. “We can increase our ease of doing business ranking from 142 to 100 only when we take initiatives for big transformation,” Modi said. (IANS) // ]]>