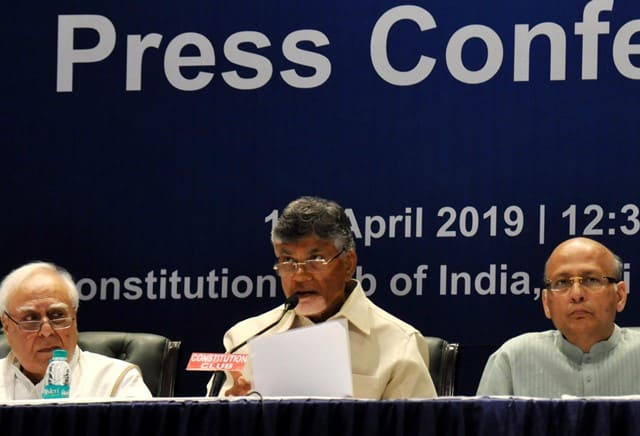 Andhra Pradesh Chief Minister N Chandrababu Naidu on Sunday alleged that the Election Commission was acting at the behest of BJP as it turned down his demand for 50% Electronic Voting Machines to be verified against paper audit trail machines.

“EC is acting under BJP. They are not correct. They have to act impartially which they are not doing. Also, we doubt that even EVMs are being manipulated and that’s why we are demanding 50 per cent counting of VVPATs. They are not agreeing. Why are they not doing so?” Naidu told ANI after the press conference of the Opposition leaders, who earlier threatened to move the Supreme Court over the issue of alleged malfunctioning and tampering of EVMs.

The TDP supremo claimed that people had “lost trust” in EVMs, while underlining the need for the EC to restore the confidence of the voters through paper trail machines.

“People are not trusting EVMs. EC has to restore the confidence of people,” Naidu said.

On Saturday, Naidu met EC officials over the issue of EVM ‘malfunctioning’ in the ongoing Lok Sabha elections. He demanded the top electoral body to revert to ballot paper system immediately to “preserve the sanctity and protect the spirit of the electoral process and democracy.”

On April 11, polling in a few districts of Andhra Pradesh was disrupted briefly due to malfunctioning of EVMs, following which Naidu had requested the EC for an extension of polling time in the state to compensate for the time lost due to technical glitches.

Voting took place for all the 25 Lok Sabha seats in Andhra Pradesh and for its 175 Assembly seats on April 11. Counting of votes will take place on May 23. (ANI)