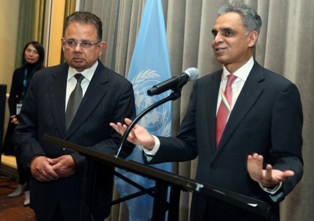 Dalveer Bhandari of India ?? is elected by #UNGA and the Security Council as a member of the International Court of Justice (@cij_icj) for the term 2018-2027. ? Watch Full ? https://t.co/nqUvZqKq6v What is the #ICJ? Full explainer? https://t.co/diHJdvy9pU pic.twitter.com/eQr1uKkYP2

— UN Web TV (@UNWebTV) November 20, 2017 The withdrawal of its candidate by Britain, which had the backing of its fellow permanent members, was a setback for the Security Council that had been locked in a test of wills with the Assembly. A candidate has to win a majority in both the chambers. Bhandari won majorities in the Assembly in the first 11 rounds of voting over two meetings, while the Council blocked his election by giving majorities to Greenwood in the ten rounds of balloting it held.

“The British ultimately had to bow down to the will of the majority,” a diplomat said. “The Indians stared them down.” The Council’s permanent members have traditionally had a judge in the ICJ, assuming it to be a matter of right. This time the 193-member Assembly asserted itself, forcing the Council to back down and put at risk the continuation of the ICJ perk of the permanent members. In letters written to the Presidents Miroslav Lajcak of the Assembly and Sebastiano Cardi of the Council, Britain’s Permanent Representative Matthew Rycroft said that his country was withdrawing Greenwood’s candidature keeping “in mind the close relationship that the United Kingdom and India always enjoyed and will continue to enjoy”. Bhandari’s election was a dramatic face-saving turn of fortunes for India, as he lost the Asian seat on the ICJ to Lebanese lawyer-turned-diplomat Nawaf Salam, who had been campaigning for two years and had the backing of the powerful Organisation of Islamic Cooperation with 55 members in the UN. Bhandari got a second chance only because an unpopular Britain could not get an Assembly majority for a remaining judgeship requiring a runoff where the two chambers of the UN split in their voting. Bhandari’s cause became a rallying point for the nations not a member of the Council, who were chafing under the domination of the unrepresentative Council to make a popular show of force.

Congratulations to EAM @SushmaSwaraj and her entire team at MEA & diplomatic missions for their untiring efforts that have led to India’s re-election to ICJ. Our deep gratitude to all the members of UNGA as well as UNSC for their support and trust in India.

India hammered home the representative character of the Assembly compared to the Council and insisted that the UN members follow democratic principles and re-elect Bhandari by accepting the global majority he has received in the Assembly. In the last round of voting on November 13, Bhandari received 121 votes, just short of a two-thirds majority in the 193-member Assembly, while Greenwood received nine in the Council. “The precedent is clear,” India’s Permanent Representative Syed Akbaruddin said at a reception for Bhandari attended by representatives of over 160 countries on Thursday. “As is expected in the 21st century, the candidate who enjoys overwhelming support of the General Assembly membership can be the only legitimate candidate to go through.” Diplomats familiar with behind-the-scenes manoeuvres said Britain indicated late last week that it would withdraw Greenwood, but over the weekend changed course with the backing of some fellow permanent members and came up with a plan for the the Council to call for ending the balloting and set up a joint conference to resolve the deadlock. The statutes of the ICJ provides for a joint conference made up of three members each from the Council and the Assembly to resolve a deadlock that persists after three election meetings. India feared the outcome and campaigned resolutely to avoid it, pointing to the precedents in the elections in 2011 and 2014 and earlier when the candidate leading in the Council withdrew in favour of the candidate with the majority in the Assembly even though in those cases permanent members were not involved. Bhandari’s election upsets what has become a traditional balance in the ICJ. Besides a permanent member going unrepresented, four Asian countries will be represented on the ICJ bench instead of the usual three. Three incumbent judges of the ICJ — President Ronny Abraham of France, Vice President, Abdulqawi Ahmed Yusuf of Somalia, and Antonio Augusto Cancado Trindade of Brazil – were elected along with Salam in the first four rounds of voting on November 9. Bhandari and the others elected will start their term in February next year.

India’s Dalveer Bhandari re-elected to International Court of Justice after Britain withdraws candidate from election. For the first time a country has gone against P5 and emerged as a winner.#DalveerBhandari #ICJ#InternationalCourtOfJustice pic.twitter.com/alYD1aVzAk — Abhishek Singh ?? (@kabhishek744) November 21, 2017

For first time since #ICJ was established, no UK judge on the bench, UNGA votes for India’s Bhandari #ICJElection

Good news,Bhandari re-elected as Judge at ICJ after Britain withdrew it’s candidate.will be 1st time since 1945 that ICJ will be without British Judge.

Congratulations to Justice Dalveer Bhandari on his re-election as a Judge of the ICJ. Huge efforts by Team – MEA. Syed Akbaruddin @AkbaruddinIndia our Permanent Representative in UN deserves a special mention. 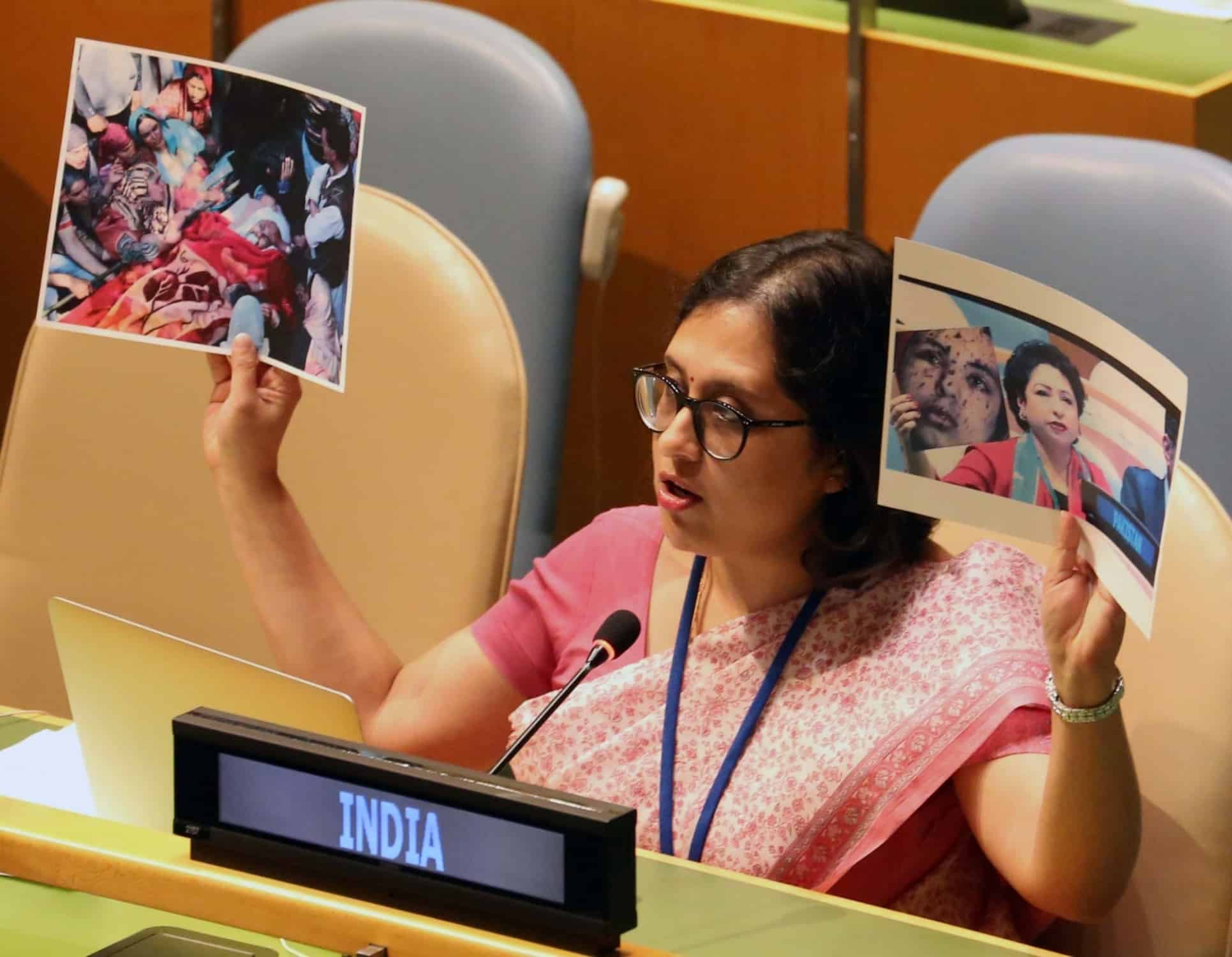 ‘A LONELY FURROW’ “Even as all those who have taken the floor have focused on issues of these Non Self-Governing Territories, a solitary member State, as usual, has ventured to plough a lonely furrow contrary to the onward march of history,” Prasad added. Lodhi said that UN’s decolonisation agenda would remain “incomplete” without resolving the Kashmir issue. Pakistan came back again after Prasad’s speech with Saima Sayed, a counsellor at Pakistan’s UN Mission, harking back to the 1948 Security Council resolution on Kashmir while exercising Pakistan’s right of reply. India did not use its right to reply to Sayed. This was Lodhi’s second attempt this month to introduce Kashmir during a debate on topics without any relevance to it. TRY, TRY AGAIN  During a debate last week in the General Assembly on the UN’s annual report, she said the surgical strikes carried out last year by India against terrorist hideouts in Pakistani-held territory never happened and asserted that New Delhi was trying to provoke her country by saying it took place. The surgical strike was in response to an attack on an Indian position in the Uri sector that killed 18 soldiers. As Prasad pointed out, Pakistan has been “ploughing a lonely furrow” at the UN in trying to raise the Kashmir issue with no other country taking note of it despite Lodhi bringing it up in forums where it has not relevance. India is adopting a tactic of reacting to Pakistan’s taunts over Kashmir by either ridiculing them or ignoring them, rather than getting entangled in a debate giving it importance. When Pakistan Prime Minister Shahid Khaqan Abbasi launched one of the most heated attacks in recent times on India during his address to the high-level meeting of the General Assembly last month, a First Secretary in India’s Mission Eenam Gambhir, called Pakistan “Terroristan” in her reply. “The quest for a land of pure has actually produced ‘the land of pure terror’.” Again last week, Gambhir dismissed Lodhi’s statement on the surgical strike by saying: “My delegation does not wish to waste the precious time of this august assembly in further engaging with such distractions.” Lodhi’s response to External Affairs Minister Sushma Swaraj’s  speech last month at the General Assembly backfired when she held up the picture of an injured Palestinian child claiming she was from Kashmir. (IANS) // ]]>