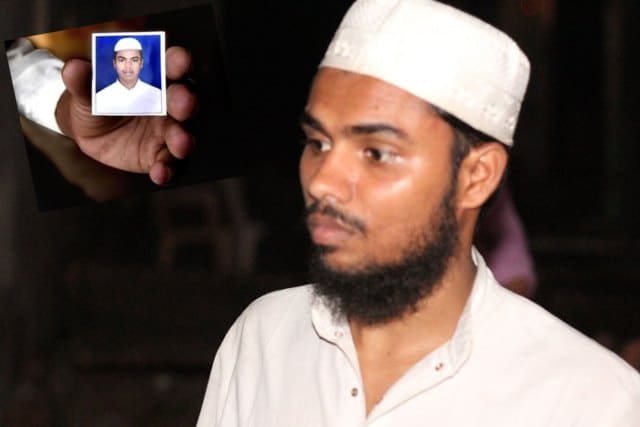 What could possibly lead a group of men to stab a fasting teenager just because he belongs to a different faith? What can provoke complete strangers in a train to turn into a lynch mob? Hashim, brother of Junaid Khan who was killed a year and half ago, is still searching for these answers.

One and a half years ago, my younger brother Junaid made the headlines. He hasn’t been alone though. There have been others in his league — Pehlu Khan, Mohammad Ikhlaque, Rakhbar Khan… Alimuddin Ansari. The list is growing by the day. All these names are connected with one thread: they were attacked and lynched in the most brutal manner because they were Muslims.

I have recalled this story a multiple times, yet the gory details remain a blur.  I was on the train with Junaid and our brother Shaqir (22). We were on our way back to our village in Ballabhgarh after shopping for Eid in Delhi.

At the Okhla Station, 20-25 people scrambled into the train. An elderly man asked for a seat and Junaid got up and gave his. But as soon as he stood, one of the men pushed him and said, “Yeh toh Mulle hai, gaddar hain, beef khate hain, Pakistani hai. (These are Muslim traitors, eat beef. They are Pakistanis.)” We sensed their intent but we had an answer ready. ‘We are all Hindustani,’ we countered. But that did not stop people from hurling abuses at us, repeatedly calling us beef-eaters. It was Ramzaan and we hadn’t had anything to eat since dawn.  But our attackers could not care less.

The group started to provoke other passengers, until at one point of time the entire train bogey turned against us. The name-calling continued, followed by some heavy punches. And then the knives were out. They stabbed Junaid incessantly. Shaqir and I were stabbed too, I don’t remember how many times.

We were thrown out of the train at the Aasoti Station near Faridabad. Junaid bled to death on my lap and I could not do anything about it. We were taken to a hospital in Palwal where reality slowly started dawning upon us. Life will never be the same again.

My brother left a vacuum in the family. A boy who did not even care much about eating meat was called a beef-eater and killed.  As for me, my legs still pain from the injuries though it has been one and a half years. I can’t run like I did before and I can’t even tell my mother about my suffering. The pain of loss does not seem to go away. And the wait for justice seems endless.

Six people were arrested for the crime. But all are out on bail. One of them got bail after 28 days! The other four got bail in two months. And the main accused, Naresh Kumar, was freed by the Punjab and Haryana High Court on October 3 this year. He had confessed to his crime before the judge, everyone knew he had wielded the knife, yet he was let off.

When the DSP arrested them, he told us: ‘I have done your work, now I will have to work for them. My hands are tied, I have kids and a family to take care of.’ He made it quite clear that he will ensure that those murderers are let off the hook.

Every day, we live in fear. My father suffered a heart attack when four of the accused were granted bail. The government lawyer, we found, was worthless. We have not even seen his face in a long time. We also hired a non-Muslim lawyer, thinking maybe that would get us justice but that too hasn’t helped us. We do not know whom to trust.

We have already spent Rs 25-30 lakh on court expenses and had to sell three plots of land to meet them. Each trip to Chandigarh (for the high court) costs us about Rs 15,000. The Haryana government hasn’t been of much help. We were promised Rs 10 lakh as compensation but have never seen the money. The only respite is that Communist leader Brinda Karat has now got us a decent lawyer.

We have already petitioned the Supreme Court. We have full faith that justice will prevail but imagine if the child of a politician had been killed this way. Don’t you think the murderer would have been hanged by now?