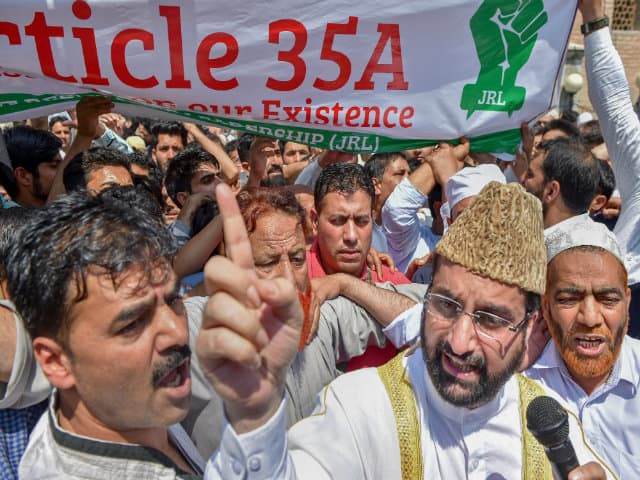 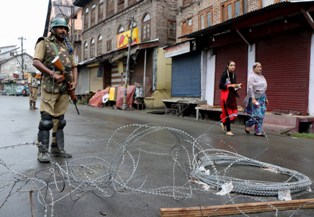 No hopes from talks, autonomy only way: Farooq

National Conference President Farooq Abdullah on Sunday said he does not have any expectations from newly-appointed J&K interlocutor Dineshwar Sharma and the only way forward in Kashmir is restoration of autonomy to the state. Addressing a party gathering in border town of Tangdhar in Kupwara district, he said the the Central government should devise a sound Kashmir policy and termed the appointment of a new interlocutor to J&K as nothing new. “I have very little expectations from this new interlocutor. Like it has been done before, he will come and meet people. In 2010, then UPA government appointed a group of interlocutors who visited the state and had detailed discussions with every section here. The process took more than two months and after they were done with meeting people, a report was compiled. What happened to that report? Did the government discuss that report in any forum including the Parliament? “No. Instead it has been thrown into a dust bin somewhere in north Block. It was followed by a delegation comprising of parliamentarians who visited Kashmir. What happened to that delegation and their recommendations? Nothing happened. So I expect nothing to happen now as well,” said the former Chief Minister. Sharma is expected to meet political leaders, traders and students. However, separatist leaders, including Syed Ali Shah Geelani, Mirwaiz Umar Farooq and Yaseen Malik have declined to have parleys with the interlocutor. He said it was their choice whether they want to meet him or not. “I can only suggest everyone to contribute to peace building in the state. People have suffered a lot there.” Sharma is an old Kashmir hand who served as Assistant Director Intelligence Bureau in the state from 1992-94 – the time when militancy was at its peak in Jammu and Kashmir. He headed the IB for two years from December 2015 to December 2016. It was also the time when widespread violent street protests erupted in the Kashmir Valley following the death of Hizbul Mujahideen commander Burhan Wani. (IANS) // ]]> UK’s Labour leader Emily Thornberry put the pigeons among the cats recently when she said India needs to allow international human rights monitors in Kashmir. The 57-year-old shadow foreign secretary of the resurgent Labour Party was quoted as saying: “I know there are people in India who say these stories are exaggerated or indeed downright lies. And if that’s right, it does seem to me that India has nothing to fear from allowing human rights monitors into Kashmir in order to be able to support that it isn’t true.” Thornberry would be foreign secretary if the Jeremy Corbyn-led Labour Party wins the next election, a distinct possibility in the wake of the disastrous Conservative showing in June’s snap poll.  In these elections, the Labour manifesto —whose Kashmir part was authored by Thornberry—spoke of urging negotiations towards political resolution in regions experiencing conflict, including Kashmir.     New Delhi designated former Intelligence Bureau chief Dineshwar Sharma as its representative to initiate “interaction and dialogue to understand the legitimate aspirations of the people” in Jammu and Kashmir.

In India, mainline Hurriyat leaders maintained silence over the Centre’s decision to open a dialogue with all stakeholders in Jammu and Kashmir, but a former chief of the separatist amalgam on Tuesday said any peace process without involving Pakistan was futile. Moulvi Abbas Ansari, a prominent Shia leader, said tripartite talks between India, Pakistan and people from Jammu and Kashmir, was the only way forward to resolve the Kashmir problem. “When I was the chairman of the Hurriyat Conference and general Pervez Musharraf ruled Pakistan, I told both the countries that a solution can only be reached if people from both parts of Kashmir are included in a tripartite dialogue between Kashmiris, India and Pakistan,” the senior separatist leader said in a statement.

The Opposition, including the Congress and Left, on Tuesday voiced doubts at the government’s “intent and sincerity” behind its sudden Kashmir initiative and wondered if it was linked to the visit of US Secretary of State Rex Tillerson. Leader of Opposition in Rajya Sabha Ghulam Nabi Azad on Tuesday said the Modi government after three years of “hot pursuit” was talking of dialogue for the sake of publicity, while Communist Party of India Marxist (CPI-M) General Secretary Sitaram Yechury termed the Modi government’s approach on Kashmir as a “flip-flop policy”. “Tamannao me uljahaya gaya hoon/khilone dekar behlaya gaya hoon (I have been trapped in wishful thinking/I have been mollified by toys),” Azad said, underlining his views on the government’s dialogue initiative which he said has come too late and lacks a fixed timeframe.

The NIA on Tuesday arrested Hizbul Mujahideen chief Syed Salahuddin’s son Syed Shahid in a six-year-old terror funding case, a day after the government decided to open talks with “all stakeholders” in Jammu and Kashmir. Shahid, 42, a state government employee, was arrested in Delhi after he was called for questioning at the National Investigation Agency (NIA) headquarters. “Shahid over the years has been receiving and collecting funds through international wire money transfer from” Hizbul Mujahideen militant Aijaz Bhat, a Srinagar resident now based in Saudi Arabia, an NIA statement said. The NIA said Shahid was one of Aijaz Bhat’s several contacts who were in telephonic touch “to receive the money transfer codes”. The money was meant to fund Hizbul Mujahideen’s militant activities in Jammu and Kashmir. Shahid, who lives with his family in Soibugh village of central Budgam district, has a masters degree in agriculture and works as a village agricultural assistant in the state’s agriculture department. His contractual job was confirmed by the government in March this year. The 2011 terror funding case pertains to terror money sent through hawala channels by militants based in Pakistan and Saudi Arabia to Jammu and Kashmir. The NIA had filed two chargesheets against six accused in the case in 2011. Four of them – Ghulam Mohammed Bhat, one of the closest aides of hardline Hurriyat leader Syed Ali Shah Geelani, Mohammed Sidiq Ganai, Ghulam Jeelani Liloo and Farooq Ahmad Dagga – are currently in Delhi’s Tihar Jail. Two of the accused, Mohammad Maqbool Pandit and Aijaz Bhat, are on the run and have been declared proclaimed offenders. Pandit, like Aijaz Bhat, has been an active Hizbul Mujahideen militant and is currently based in Pakistan. Aijaz Bhat, according to NIA records, received arms training with the Hizbul Mujahideen in Pakistan-administered Kashmir in early 1990s. He never returned to Srinagar and began working for the militant group in Pakistan. He is said to have stayed in Sialkot before shifting to Saudi Arabia for generating funds for the group’s activities in Jammu and Kashmir. An NIA official said the agency through phone records found that he was in touch with Ghulam Mohammed Bhat, a Srinagar-based lawyer, in 2011. According to NIA, the lawyer separatist had procured over Rs 4.50 crore from Pakistan through hawala channels within three years after 2008 for funding militant activities in the Kashmir Valley. Ghulam Mohammed Bhat, Ganai, Liloo and Dagga were arrested on January 22, 2011 and Rs 21.20 lakh were recovered from them. After their arrest, Aijaz Bhat used to send money to Shahid. The Hizb founder’s son, according to an NIA official, received at least four instalments of money in 2011, 2012, 2013 and 2014. Shahid is the third son of Salahuddin, who also heads the United Jehad Council, the amalgam of Kashmir militant groups based in Muzaffarabad in Pakistan. Salahuddin unsuccessfully fought the 1987 Assembly elections in Jammu and Kashmir. He then crossed over to Pakistan and founded the Hizbul Mujahideen — the largest militant group in Jammu and Kasmir. Salahuddin has five sons and two daughters, who are all employed with the state government.   (with IANS)   // ]]> 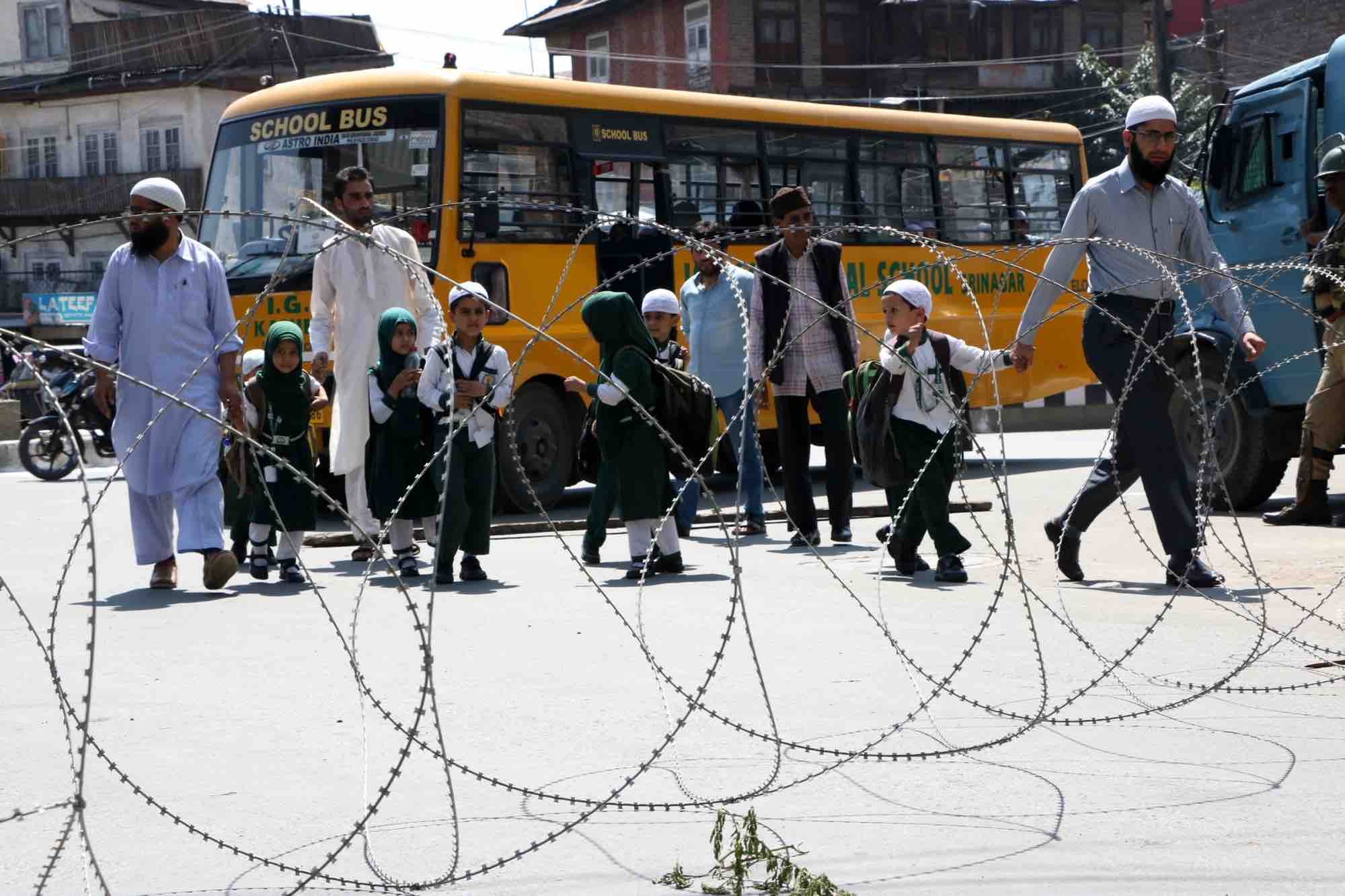 It’s back to the dialogue board in Jammu and Kashmir again. In a sudden change of its tough stand, the Centre on Monday announced its decision to start a dialogue process in Jammu and Kashmir and appointed former Intelligence Bureau (IB) Director Dineshwar Sharma as its representative for talks with “all” stakeholders in the troubled-state.

“Carrying forward the conviction and consistency in its policy, we have decided that a sustained dialogue process should begin in Jammu and Kashmir,” Home Minister Rajnath Singh told a hurriedly convened news conference here after having maintained for long that there could be no talks with the separatist Hurriyat. “As a representative of the government of India Sharma will initiate a sustained interaction and dialogue to understand legitimate aspirations of people in Jammu and Kashmir. He will meet elected representatives, political parties, different organisations and individuals he wants to. “The sustained dialogue and interaction with all sections of the society and to understand the legitimate aspirations of people of Jammu and Kashmir, particularly its youth. “Now what we will do for Jammu and Kashmir, will do with clean intention.” Asked whether the interlocutor, who will have Cabinet rank, would hold talks with Hurriyat leaders, Rajnath Singh appeared not to rule out such a possibility, saying Sharma had a mandate to hold a dialogue “with anyone he wants”.

I sincerely hope all the stakeholders take this opportunity and help bring the state out of the quagmire of uncertainties.

The Centre had been maintaining a tough Kashmir policy and had ruled out talks with separatists in recent months. The Home Minister said after completing the exercise, Sharma, a 1979 batch IPS officer with intimate knowledge of the security situation and Kashmir affairs, will give a report to the Centre. Sharma was Director of IB from January 1, 2015 to December 31, 2016. Earlier, he was the Joint Director of the IB’s Islamist Terrorism Desk from 2003 to 05. He headed the Central Reserve Police Force (CRPF) in Jammu and Kashmir and was the director of the BSF Academy, and Additional Director and Special Director in the IB.

The acceptance of the political nature of the #Kashmir issue is a resounding defeat of those who could only see use of force as a solution.

Replying to questions, the minister said no time limit could be set whether it is three months or six months or more. “He can talk to any one he wants.” He said Prime Minister Narendra Modi had talked to all political parties as to what could be done to find a solution to Kashmir problems. “People told us that the dialogue process should be started. We are doing this,” he said and recalled the Prime Minister’s August 15 speech saying “neither by bullet, nor by abuses but by embracing the people we can solve the problems in Jammu and Kashmir”. Asked about the status of the resignation reportedly given by Governor N.N. Vohra and whether it would be accepted in the new context, Rajnath Singh merely replied that the elected government is there and the Governor is there.

“From no-talks to talks-with-all-stakeholders is a major victory for those who had strongly argued for a political solution in Jammu and Kashmir. With the appointment of an interlocutor, I hope the government has finally admitted muscular approach has failed.”