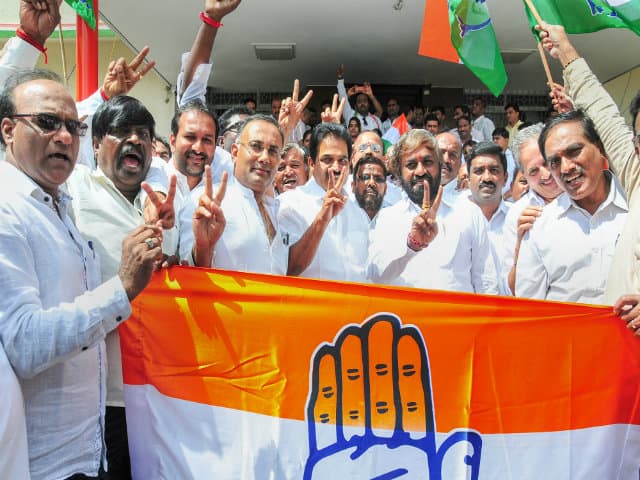 Complete blackout of #KarnatakaBypolls results by mainstream hindi news channels. @republic not even flashing the results anywhere on the screen. These are the same people who do opinion polls every week 😂 Tough Diwali for BJP & Godi Media. #KarnatakaByElection2018

The sweeping victory of the Congress – JD(S) alliance in the #KarnatakaBypolls is just a teaser for what is in store for the BJP next year. Congratulations to all the winners.#KarnatakaRejectsBJP

#KarnatakaByPolls | I think as far as southern India is concerned, you can’t make Ram Mandir a political plank. People are looking at what they’re going to get, what benefit they’re going to get in social and economic sector, administration and transparency: DK Shivakumar to ANI pic.twitter.com/gy2NBQAFkY

Chandrashekhar, who had joined the BJP ahead of the polls returned to the Congress weeks later, leaving the saffron party red-faced and the field open for a walkover for Anitha Kumaraswamy. Ramanagara seat fell vacant after Kumaraswamy preferred to retain Chennapatna, the other constituency from where he had won. In Jamkhandi Assembly segment, Congress candidate Anand Nyamgouda defeated BJP’s Srikant Kulkarni by a margin of 39,480 votes, riding a sympathy wave following his father and sitting MLA Siddu Nyamagouda’s death in a road accident. JD(S) candidate LR Shivarame Gowda scored a big victory in Mandya, defeating BJP’s Siddaramaiah, a political green horn and a former civil servant by a margin of 3,24,943 votes. Mandya is a stronghold of the Vokkaliga community to which JD(S) supremo and former prime minister H D Deve Gowda belongs. With Tuesday’s victory, the Congress-JD(S) alliance’s tally will go up to 120 seats in the 224 member Assembly, where the BJP has 104 MLAs. Elated over the performance of the ruling alliance candidates, jubilant Congress workers distributed sweets and broke coconuts at various places. Karnataka Congress president Dinesh Gundu Rao claimed that the results reflected the disenchantment of people with the BJP. “Look at the margins… It’s clear that people are fed up with the BJP. This anti-people, anti-farmer, anti-women government at the Centre must go. All forces need to come together to take on the BJP. The BJP will be wiped out of Karnataka in 2019 (Lok Sabha polls). If it is wiped out in Karnataka, it will be wiped out in the entire south India,” he said. Karnataka is the only south Indian state where the BJP has been in power. The by-elections for three Lok Sabha seats were necessitated after Yeddyurappa and Sriramulu of the BJP and CS Puttaraju of the JD(S) vacated Shivamogga, Ballari and Mandya following their election to the assembly in May. Bypolls to Jamkhandi seat was necessitated following the death of sitting Congress MLA Siddu Nyamagouda, while Ramanagara fellvacant after Kumaraswamy gave it up. (PTI)]]>