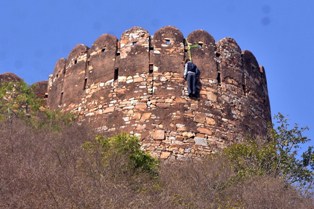 — Anshul Saxena (@AskAnshul) November 24, 2017 Deputy Commissioner of Police Satyendra Singh said that the dead man had been identified as Chetan Saini, a resident of Jaipur’s Shastri Nagar who ran a jewellery and handicrafts business. Singh said it was not clear if it was murder or suicide and that it would be too early to relate the messages on the rocks to “Padmavati”. The Rajput Karni Sena, which is most vocal against the movie, denied any involvement in the case. “We express complete disapproval of it and deny our involvement in any manner,” Vivek Singh Shekhawat, the Rajasthan General Secretary of the group said. The release of the Hindi film, earlier scheduled for December 1, has been deferred. Bhansali continued to get the support of the film fraternity. Prosenjit Chatterjee said “directors will stop doing historical films the way it has been handled”. Rani Mukerji said she stood by Bhansali: “He knows that I back him, love him. He is my darling and Sanjay truly believes how much I love him and he knows how I stand by him.”


So the British censor board has cleared Padmavati before our censor board. I think, we should also make a film on the scandals of Royal family and Ireland freedom struggle and show it worldwide.

WHAT IT 1ST LOOKED LIKE Karni Sena murdered a man to protest against Padmavati.

WHAT IT IS: 1. A Hindu man was murdered and made to look like Muslims did it. 2. Killers ensured it doesn’t pass off as suicide. 3. Used opportunity to mock/taunt Karni Sena https://t.co/8gxRMjBTC1 — Kamlesh Singh (@kamleshksingh) November 24, 2017

When #Padmavati releases I can’t wait to watch it in theatres 10 times. In fact I’ll buy you tickets too. We’ll watch Deepika’s glorious midriff in slow motion. Over and over again, like evolved, woke and peaceful humans.

All this ‘caste pride’ & ‘honor’ is about what exactly? There’s a word for it in English: Insecurity.#Padmavati