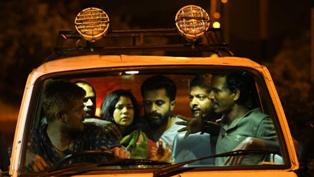 It’s gone from Sexy to S to S### but Sanal Kumar Sasidharan’s Malayalam film S### Durga just couldn’t make it past the authorities, be they the censor board, or the Union information and broadcasting ministry or the worthies running the show at the International Film Festival of India. A day after being screened for the jury at the 48th International Film Festival of India (IFFI) on directions of the Kerala High Court, S### Durga failed to make it to the lone remaining day of the event due to fresh title-related issues raised by the Central Board for Film Certification (CBFC).

This time, it’s the three new hashtags after S in the title. IFFI director Sunit Tandon said the film could not screened at the festival which closed on Tuesday. Tandon’s letter to director Sasidharan said: “Following the (jury) screening, certain issues related to the certification of the film with reference to the title of the film were raised. This was referred to the CBFC for clarification. As a consequence to the orders of CBFC, the film cannot be exhibited till the issues are resolved.” The film was dropped from the screening schedule of the Indian Panorama section of the IFFI along with another film Nude, triggering controversy. Sasidharan intensified his fight for “justice” with a petition at the Kerala High Court last week. The court directed IFFI to screen the film at the festival after a censored version of the movie was screened for the jury. According to official sources, the jury voted 7-4 in favour of screening the film at the festival late on Monday night even as the festival was scheduled to end on the subsequent day. The CBFC has now claimed that the change in title from Sexy Durga to S Durga and then to S### Durga was problematic and that the Indian Panorama jury which watched the film on Monday had complained about the changes in the title. “Now we have received complaints from the IFFI jury at Goa that the title of the film on the title card is shown by the filmmaker as S### Durga which has totally different implications and are effectively undermining and attempting to defeat the very basis of the title registration and changes effected thereby,” Pratibha A, the CBFC regional officer from the Thiruvananthapuram division, said in a communication. The CBFC communique to the film’s producer Shaji Mathew also directs that the film should not be exhibited because of violations under Rule 33 of the Cinematograph (Certification) Rules 1983. Meanwhile, Sasidharan and the film’s actor Kannan Nayar staged a token protest near the IFFI screening facility here, against the refusal of the IFFI organisers to screen their film at the festival, despite the jury voting in the film’s favour. “It is a bias we are facing. Our film is not Sexy Durga now, it is ‘Sexy Democracy’… They are imposing silence on us. They think it is just a filmmaker and a film they are silencing. They will come to your home and silence you. That is when you will realise how serious the threat is,” Sasidharan said. (IANS) // ]]>