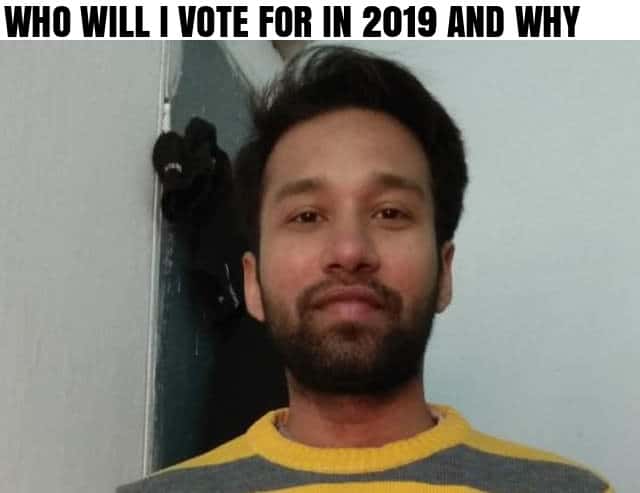 Navneet Chauhan, 28, postgraduate student, IIT Delhi Student   The last few years have definitely seen a change, but the change is in the perspective towards Modi. Initially he was thought to be the panacea for everything wrong with the country — the harbinger of ‘Achhe Din’. But that is not the case anymore. After being in power for five years and not having fulfilled most of the promises he made to people, he himself seems to have changed the goalpost. Now, he says he needs more time, till 2024. Whether it is doubling the income of farmers or building affordable houses, he wants another term for the job. Promises Falling Flat I voted for Modi in 2014, because he had pledged to clean river Ganga. Had he succeeded in doing so, I would have voted for him once again downright. But all his promises are falling flat. Not even half of his promises have been fulfilled. The problem is that this government has always identified itself with Narendra Modi — it was always called the ‘Modi’ government. It was never perceived as the government of the people of India. Had it been the government of the people of India — it would have respected dissenting views of the Opposition as well. On the contrary it launched a campaign for ‘Congress-mukt Bharat’, as if there weren’t any better things, our country needed to be ‘mukt’ of. In a parallel universe created by the Modi government, our country already seems to have gotten rid of poverty, malnourishment, pollution and other maladies. With no positive achievements to showcase, Modi has resorted back to the Ram temple issue to garner votes. I don’t know if Ram Lalla was born where they claim. But I know for sure that Maryada-Purshottam Ram would be deeply hurt after watching all the hateful, communal content being circulated in his name. Secondly, this government succeeded in putting a ban on cow slaughter but did not have a robust plan of what it would be doing with all the stray cows roaming around, once they were abandoned by their keepers/caretakers. Demonetisation and Fuel price hike Demonetisation was badly planned and people suffered because of its childish execution. It had been better if it was done after systems like UPI, online banking, other online payment methods were well established in the country. In a country where a large section of society still works on cash transactions, a move like demonetisation was bound to be a disaster. Now, according to RBI figures, it seems even the white money that was already there in circulation got out of the system. This is because a person, who earns Rs 1,000  per day was not keen on losing one day’s salary by standing in line, rather he chose to get Rs 800 of new notes in exchange of old notes of Rs 1,000 by illegal means. People made a racket out of demonetisation and got away with it. Apart from demonetisation, the rising prices of commodities hurt the economy. The price of a commodity is decided by various factors, such as land, labour, availability of raw materials and most importantly cost of transportation. With fuel prices increasing, the price of everything goes up. Petrol prices can still be tolerated but price hike of diesel hurts a lot because mainly trucks run on diesel, and they carry everyday consumables, namely vegetables and fruits etc. A common man can opt for public transport instead of his own vehicle to save money, but there is no replacement for food. The Delhi government’s economic policy is a good example of how a budget should be made. They have focused on health and education primarily, which any economist would approve of. This in my opinion is the right long- term solution for the nation’s economy. Quota Politics in an Election Year The Supreme Court had put a cap on reservation and stated that reservation should not be more than 50 percent. Petitions have been filed in the Supreme Court challenging the reservation in jobs for the people in General Category and as per reports though the Supreme Court has not stayed the decision, it will be examining the decision. I think the EWS quota is just a populist measure to garner votes from the upper castes. To me the truth is pretty apparent. The government is well aware of the fact that that Supreme Court will strike down this constitutional amendment. But the Modi government has brought about the amendment in an election year because the SC will take some time to give its verdict. I feel a decision will be taken only after the elections. But even if SC announces its verdict early, BJP will very smartly blame the Apex Court for playing spoilt sport. This is just another way of making fools out of us. Opposition also can’t openly challenge it because it would hamper their upper-caste vote bank. No Strong Opposition The Opposition led by Congress needs to raise issues such as price rise, farmer distress from the very beginning. These issues strike a chord with the common man. They have talked about Rafale deal case, is difficult for a layman to connect to. Alas! Because of lack of a strong opposition, I think Modi will be elected again. We have seen many a khichdi sarkars earlier. These governments were always constrained by the demands of smaller regional parties in the coalition. All opposition parties are trying to form a ‘grand alliance’ only at the fag end of Modi’s term. Thus, it is easier for Modi to brand them as a ‘coalition of opportunists’. Also it is very unlikely that a coalition government will work in harmony.]]>