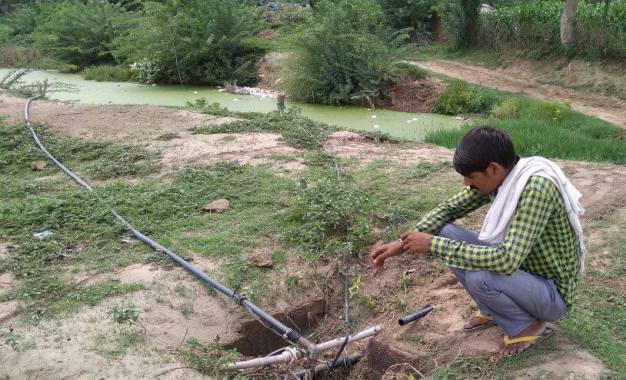 visits the “cancer village” of Sakras in south Haryana. Located in newly renamed but as-poor-as-before Nuh district, Sakras has the air of death over it. The stench too, from an open drain leading out of the village. Cancer may the reason for the infamy of the village, but it’s no better or worse than those dotting the dry countryside for miles around.    Mohamad Irshad does not understand who, or what, to blame for the death of his father from lung cancer. He lives with seven other members of his family in Sakras village of Haryana’s most backward district of Nuh, earlier known as Mewat. This southwestern part of Haryana is an arid region with a history soaked in the blood of many battles, its sand-and-rock margins blending into Rajasthan’s Alwar and Bharatpur districts. In this district where Muslims make up almost 80 per cent of the population, Sakras, about 75 km from Delhi, is known as the ‘cancer village’— over 45 cancer deaths have been reported here in just the last three years, and 100-odd in the last decade. “It is hard to pinpoint the reason for many cancer deaths, including that of my father. We live in constant fear after my father Abdul Razzaq died on May 1 this year. Earlier, his three brothers Bashir, Shahabuddin and Qayyam Ali also died due to cancer in chest, mouth and throat respectively over the last two-and-a-half years,” Irshad says. “My father had undergone chemo therapy for one-and-a-half year, including nine months at the All India Institute of Medical Sciences at Delhi, but he did not survive.” Sakras residents say life in the village is harsh as it is, with a crushing lack basic amenities like drinking water, proper drainage system and sanitation. Most blame the ground water, their sole source of drinking water, as responsible for the frequent cancers. It’s contaminated, they say. Niyamat Ali Khan says even the taste of the water in the village is different. “Our village has a population of about 28,000 and is considered one of the largest in Ferozpur Jhirka tehsil of the district. We have sunk borewells at several places in the village to extract groundwater for drinking. Apart from the area near the drain, the entire village gets salty water to drink. Hence, the villagers have installed half a dozen submersible pumps next to drain to fulfill their daily needs,” Khan says. It is clear he believes the drain to be the culprit. Other Sakras residents share his suspicions. Most say that the sewage water in the drain is being sucked up by the surrounding soil and subsequently contaminating groundwater. But there’s no choice, they say. Then again, the pipes used by the submersible pumps to extract groundwater are also variously immersed in the drain as they snake the shortest way to their user destinations in the village. Fazaluddin Beser, the former sarpanch (village head) says the village has been witnessed deaths due to illness for a “long time”, but the numbers have gone up alarmingly only in the last three years. “We have noticed several deaths due to illness in the last two-and-a-half years that reveal an alarming trend of cancer in the village. I have immediately brought it to the notice of the district administration so they can find out the reason behind these frequent deaths. Officials took samples of water from the village a month ago and their test results are awaited,” Beser says. The former sarpanch, too, subscribes to the groundwater theory. “We have strong suspicion that the groundwater the villagers are using for their domestic needs is contaminated in some way. That the public health department of Nuh has not revealed the result of water sample testing is only adding to the fear here,” Beser says, pointing his finger at the district administration of Nuh for not coming up with a proper action plan like installation of a common water purification system in the village. “It’s not the mobile transmission towers,” he says. “If that be the case, patients would have brain cancer which is not the case here with most patients dying due to lung cancer and some to cancers of the mouth and throat. Cancer experts from different states, including Punjab, Delhi and Rajasthan, came here but none could pinpoint the cause of the high cancer rate here.” What does the government-appointed civil surgeon have to say? Shri Ram Siwach calls the situation “really alarming”, adding that the health department of Haryana is deeply concerned with it. “We have collected water samples and analysis continues. We are also taking help of prominent cancer experts,” he says. Meanwhile, cancer continues to stalk the untidy streets and warrens of Sakras.]]>